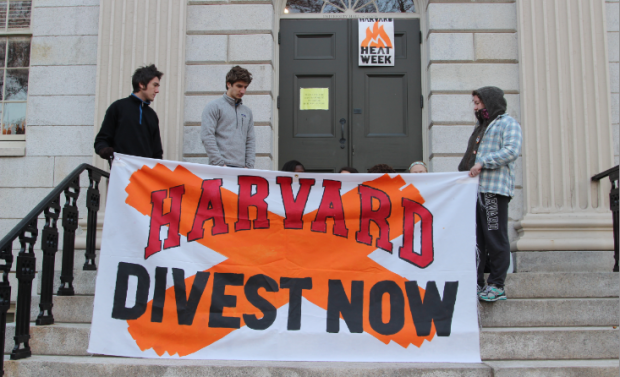 Why the Fossil Fuel Divestment Movement May Ultimately Win

Nestled in Vermont’s bucolic Champlain valley, Middlebury College is a seedbed of environmental activism. Middlebury students started 350.org, the environmental organization that is fighting climate change and coordinating the global campaign for fossil-fuel divestment. Bill McKibben, the writer and environmentalist who is spearheading the campaign, has taught there since 2001. Yet Middlebury has declined to sell the oil, gas, and coal company holdings in its $1 billion endowment. McKibben’s alma mater, Harvard University — which has a $36 billion endowment, the largest of any university — also has decided not to divest its holdings in fossil fuel companies. Indeed, virtually all of the United States’ wealthiest universities, foundations, and public pension funds have resisted pressures to sell their stakes in fossil fuel companies. And while a handful of big institutional investors — Norway’s sovereign wealth fund, Stanford University, and AXA, a French insurance company — have pledged to sell some of their coal investments, coal companies account for less than 1 percent of the value of publicly traded stocks and an even smaller sliver of endowments.

Put simply, the divestment movement is not even a blip on the world’s capital markets. Yet McKibben says the campaign is succeeding “beyond our wildest possible dreams.” By email, he tells Yale Environment 360:

At this point to have everyone from the Episcopal Church to Stanford to the biggest insurance carrier in France to the biggest pool of investment capital on earth (Norway’s sovereign wealth fund) taking steps along this path is almost unbelievable. Almost from the start, academics have called it the fastest growing such anti-corporate campaign in history, and it’s clearly accelerating by the day.

He may well be right. That’s because the goal of the divestment campaign is not, and has never been, to do financial harm to fossil fuel companies by causing investors to sell their shares. “Divestment isn’t primarily an economic strategy, but a moral and political one,” says 350.org on its Go Fossil Free website The divestment campaign aims, first, to build a bigger and stronger climate movement, and, second, to put the fossil fuel industry on the defensive by attacking its reputation and challenging the long-term viability of its business in a climate-constrained world.

“Calling for divestment is about targeting the fossil fuel industry, taking away its social license to operate, like tobacco, like apartheid,” says Ellen Dorsey, the executive director of the Wallace Global Fund. “A strong case can be made that these are volatile and risky investments.” The Wallace fund is a key financial supporter of the divestment campaign, as well as a leader of Divest Invest Philanthropy, an effort to persuade foundations to sell their fossil fuel holdings and invest a portion of their endowments in climate change solutions. While divestment was debated at a few universities and churches in the late 2000s, today’s Go Fossil Free campaign was launched in November, 2012, when McKibben — with the support of the Sierra Club, Greenpeace, author Naomi Klein, and South African Archbishop Desmond Tutu — kicked off a 20-city coast-to-coast tour called Do The Math. The campaign was loosely modeled on the 1980s divestment movement that targeted South Africa’s apartheid regime, and it grew out of McKibben’s landmark 2012 Rolling Stone article, “Global Warming’s Terrifying New Math,” in which he argued that fossil fuel companies have five times more oil, coal, and gas in their known reserves than scientists think is safe to burn. Since then, according to Go Fossil Free, more than 250 institutions that manage $61 billion in assets have committed to divest. But the numbers are fuzzy, and not as impressive as they might seem. Students have campaigned for divestment on more than 400 campuses, for example, garnering lots of attention. But fewer than 20 colleges or universities have committed to full divestment. Of them, Syracuse University has the biggest endowment, with $1.2 billion under management, putting it No. 79 on a list of college endowments compiled annually by the National Association of College and University Business Officers. Among faith groups, the Episcopal Church’s divestment decision was hailed as a victory, but the church agreed to divest only from $380 million of trust assets and not from its $9 billion pension fund. Not one of the U.S.’s 10 biggest foundations has agreed to divest. Norway’s decision to sell the coal company stocks in its $890 billion sovereign wealth fund was a victory for the moment, but the Norwegian government has no plans to leave any of its own vast oil or gas assets untapped — an action that would do far more to curb global warming than selling coal shares.

Many of the world’s biggest oil companies, meanwhile, are owned by the governments of Saudi Arabia, Venezuela, Iran, and Iraq. They are thus shielded from the campaign because their shares aren’t traded on public markets. Those financial realities lead critics to say the divestment movement is about symbolism. Divestment, they argue, does nothing to curb greenhouse gas emissions or reduce the consumption of fossil fuels, and it draws attention, energy, and money away from efforts to bring about real change. Frank Wolak, an economist who directs Stanford’s Program on Energy and Sustainable Development and a divestment critic, says that the best way to deal with the threat of climate change would be to get the world’s government to establish “a stable, predictable price on carbon.” Targeting oil companies, as the divestment movement does, only deepens partisan divides and “pushes us farther away” from solutions. “I don’t think it makes any sense to vilify someone whose product you consume every day,” Wolak said. “You need the other side to work with you.” Cary Krosinsky, an expert on sustainable finance who has taught at Columbia and Yale, has a similar view. Climate change, he says, is a complicated global problem that requires an array of solutions that take into account policy, the need to invest in clean-energy technology, and the challenges faced by energy-poor developing nations like China and India. Divestment fails to “deal with the reality of what we’re facing,” Krosinsky says. “It’s a non-starter when it comes to changing the energy mix.” Leaders of the divestment campaign don’t disagree. “Divestment, by itself, is not going to solve this crisis,” says Stephen Heintz, president of theRockefeller Brothers Fund. But when the fund’s board, which include heirs of John D. Rockefeller, who built his fortune on oil, pledged last fall to divest from fossil fuels, the world took notice. Says Heintz: “This is largely symbolic, but symbols have power. They motivate people. They inspire people. They can change behavior.” The DivestInvest Philanthropy effort is also steering more money toward investments in clean energy and energy efficiency. “We’re not just saying, ‘Get out of the bad,’” says Ellen Dorsey of the Wallace Fund. “We’re saying, ‘Get into the good.’”

Divestment has brought a spirited, informative, and often intense debate about climate change to hundreds, if not thousands, of campuses, faith organizations, and city governments. “It created a space for activism that got unleashed,” Dorsey says. Terms like “stranded assets” and the “carbon bubble” have become part of the debate. “Three years ago that was me writing in Rolling Stone, and the good folk at the Carbon Tracker Initiative,” McKibben says. “Now it’s the Bank of England, the World Bank, pretty much everyone else who works in this space. We’ve made it abundantly clear that 80 percent of fossil fuel needs to stay in the ground.” The British newspaper The Guardian launched a high-profile campaign called Keep it in the Ground, calling on the world’s two biggest charities, the Bill and Melinda Gates Foundation and the Wellcome Trust, to move their money out of fossil fuels. Bob Massie, a founder of the Ceres climate coalition and author of a landmark history of the South Africa divestment campaign, says the fossil fuel campaign is laying the groundwork for action that will follow. “Divestment injects itself into the life of different institutions, and those institutions have to have a serious conversation about issues that are important,” Massie says. “This is how societies function when they have to make complicated decisions about their future. We do the kind of serious thinking that precedes political action.”

“What’s remarkable,” he adds, “is that if they decide not to divest, they almost always decide to do something.” Yale University, for instance, rejected student divestment demands last August. In so doing, though, it announced a series of new climate initiatives, including a $21 million capital investment for energy efficiency and a research program to develop an internal carbon price that will be shared with other universities. Just as important, David Swensen, the influential chief investment officer who oversees the university’s $23.9 billion endowment, asked the endowment’s external investment managers to carefully assess the climate impacts of their portfolios. “Yale asks you to avoid companies that refuse to acknowledge the social and financial costs of climate change and that fail to take economically sensible steps to reduce greenhouse gas emissions,” Swensen wrote.