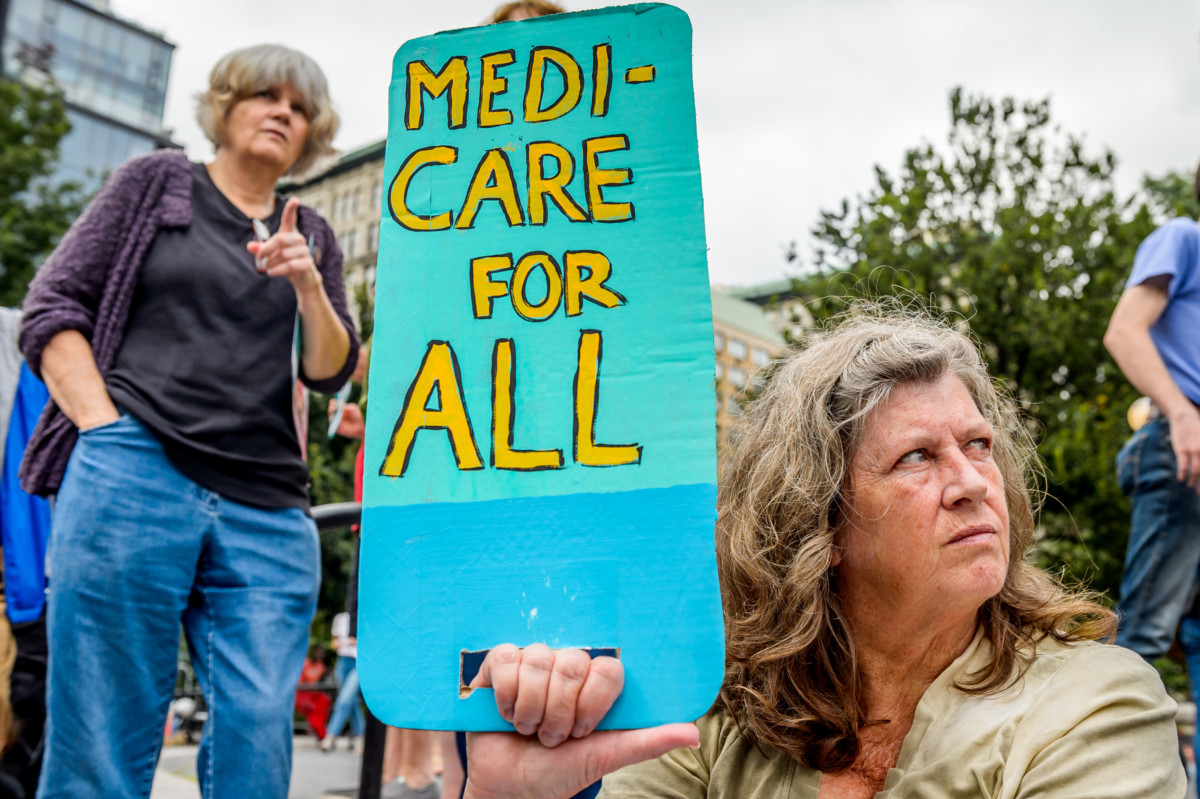 Why The Latest Attack On Single-Payer Backfired

Above Photo: Hundreds of New Yorkers joined a grassroots alliance of health care advocates in a rally on the steps of Union Square to demand a universal, single-payer, improved and expanded Medicare health care system, and an end to for-profit health care on July 24, 2017.ERIK MCGREGOR / PACIFIC PRESS/LIGHTROCKET VIA GETTY IMAGES

“If you find that you have to keep explaining what your proposal is, you haven’t done enough, and your opponents can and will destroy your efforts with a few soundbites.” —Dr. Don McCanne of Physicians for a National Health Program, 2016.

Medicare for All costs $32.6 trillion. This jarring statistic, plastered all over the dominant media last week, was designed to turn heads. “That’s trillion with a ‘T,’” the Associated Press (AP) quipped. This kind of coverage was frequent following the release of a July 30 study by the Koch-supported libertarian think tank, the Mercatus Center, which analyzed Bernie Sanders’s Medicare for All bill (S.1804). The head of the study was a former George W. Bush official, Charles Blahous.

Further examinations exposed one important fact that the study showed (but did not bother to mention or emphasize): Spending $32.6 trillion for Medicare for All would save Americans about $2.1 trillion over 10 years. These are conservative estimates that some experts argue wildly understate savings; other studies report far greater savings.

Misleading studies and news reports are not new. But given the dominant media’s woeful record covering single-payer, it can be just about impossible to shift the narrative and correct the record. In the hours and days after news of the study broke, however, something interesting happened. Advocates, citizens and journalists (some, but not all progressive) published rapid-fire responses that helped explain how this study served to, unwittingly it seems, make the case for single-payer. ThinkProgress, Business Insider, Vice, the Week, Slate, the New Republic. Jacobin, Common Dreams and others all managed to explain what $32.6 trillion means in context to current spending — something totally absent in the AP story, among others.

“Liberals should welcome a report that shows Medicare For All is a great bargain, while conservatives might want to find another source for their campaign against universal health care,” the New Republic wrote. “Even Libertarians Admit Medicare for All Would Save Trillions,” declared a Jacobin headline. And so on.

Soon enough, the noise got loud enough on social media for some of the mainstream press to take notice. Many reframed the story in subsequent reports. ABC News, for instance, initially ran the AP story headlined “Medicare for All costs $32.6 trillion,” but later, after word got out on social media, published its own article that said “Medicare-for-All program could cost $32 trillion but could also save $2 trillion.” Vox, a liberal site that has largely been dismissive of Medicare for All, said $32 trillion is “a bargain.” That article, incidentally, had nearly 20,000 upvotes at the reddit politics page. The Washington Post reported that “Sanders is right,” and his “plan would reduce overall spending on health care in the United States.” This shift in coverage didn’t happen everywhere, but overall there was a noteworthy departure from the uncritical reporting of similar sticker shock arguments in the past.

“I think the intent of that report backfired,” said Adam Gaffney, instructor at Harvard Medical School and president-elect of Physicians for a National Health Program (PNHP), in an interview with Truthout. “As soon as it was released, there was a strong push back at the hyperbolic media coverage and it became a conversation about how a Koch-funded group finds [that] the policy saves money.”

Indeed, anyone who closely watched this story develop came away with key lessons about how much we currently spend on health care; that single-payer would save money; and why it is crucial to be skeptical of claims that the policy is some unaffordable utopian fantasy of the left.

In this way, single-payer enthusiasts received a gift and a new talking point: even a Koch-funded free-market think tank’s study found Medicare for All saved trillions. Somewhere in Virginia, a frustrated group of small-government enthusiasts is probably drinking heavily.

This development may also provide some practical guidance on how to win the debate for Medicare for All. It shows that the increased awareness is making an important difference in the national discussion about the top concern for Americans (78 percent of Americans are worried about the accessibility of health care, according to a March 2018 Gallup Poll). It is also an indicator that advocates in this fight can benefit greatly from educating themselves and others about the financial implications of the policy. While the moral argument for health care justice is paramount, some advocates argue, the economic one is vital to win this reform anytime soon.

As soon as news broke of the report, many skeptical readers started asking important questions: Who paid for this study? What are their interests? What is being omitted or framed incorrectly? Sanders, the most popular politician in the country, helped answer some of these questions when he thanked the “Koch Brothers” in a tweet for “accidentally making the case for Medicare for All,” referencing the Mercatus ties to the conservative billionaires.

If such a study had come out in 2015, the left’s ability to counter this misinformation would’ve likely been relatively toothless. The issue has since entered the mainstream of political discourse, however, as a byproduct of the Sanders-inspired energy on single-payer. It appears to be making a difference. Blahous probably did not expect to have toanswer questions from The Washington Post about whether his study helps the cause for single-payer, but that is exactly what happened.

“People have to grapple with … whether the federal government could take on something of this magnitude,” he said, conceding the savings but expressing antipathy toward the government’s involvement – a staple of his organization’s ideology.

This is not to say misinformation doesn’t work or even that this study won’t still be used to attack single-payer. Prior to the pushback, as Fairness and Accuracy in Reporting (FAIR) noted, early reports from the AP, Fox News, Axios, The Hill, National Review, Reason and others largely just repeated the scary number without any reference to how it compares to the current costs.

Kenneth Thorpe, a former President Clinton staffer, was an interesting choice for an interview in the AP article that broke the story. He has written studies that show savings for single-payer on the federal andstate levels. But in 2016, in the thick of the Democratic primary, he suddenly took the opposite stance. A few months later, as Truthout reported, leaked documents showed he was recruited by the Clinton campaign to write the analysis.

“There are going to be a lot of people who’ll pay more in taxes than they save on premiums,” Thorpe said in the AP story. Like the claims in the rest of the story, this is technically true but extremely misleading. The only people who will pay more are the very wealthy — which, as a liberal like Thorpe surely knows, is how progressive taxation works. These unfortunate rich people can survive a tax increase; they have been the winners in almost every significant policy since the dawn of neoliberalism.

The AP story on cost of Medicare for All was not very useful reporting. Most Americans only read headlines and very few know how much we currently spend on health care. Without that context, it is impossible to decipher what $32 trillion means for the country. Yet, The Hill report on the study, to give one of many examples, said it “would result in a significant increase in government spending,” without mentioning that it would eliminate out-of-pocket expenses and save money overall. The savings comes from the removal of monopoly profit, widening the risk pool to leverage better drug costs and eliminating administrative waste.

Making the Economic Case for Medicare for All

This debate over costs underscores how important it is for advocates to focus on the economic argument for single-payer. This is not as easy as it sounds. Progressives are largely oriented toward focusing on the moral case of covering everyone. As James Haslam, director of Rights and Democracy, told Truthout: “Even if covering everyone in an equitable system did not save money, it would be a moral imperative to do it. We can’t just talk about financing.” Moral arguments are also extremely effective; 60 percent of the public believes the government should provide universal health care to its citizens.

The problem, some argue, is that the moral argument is less likely to persuade ideological conservatives who support the commodification of health care, or businesses who are worried about their bottom line, tax bills and profits.

This is no easy task, but some libertarians see at least some merit to single-payer. One of them is Roman Zamishka, who makes the libertarian case “Against Free Markets in Health Care.” Zamishka doesn’t share core values with the left, and his view is obviously contrarian among his ideological bedfellows. He does, however, recognize that health care is not well served by the market. For instance, he writes of the recent story about a Boston woman who fell in the crack between a subway car and a platform and begged for people not to call an ambulance to spare her the bill:

Even the bravest libertarian would be hard pressed to say that the woman who recently pleaded not to have the ambulance called should not receive emergency care if she can’t afford it. I certainly can’t say it, and there are some on Twitter who have been impressed with my lack of empathy. If we, as a society, agree that emergency care is a public good and that shopping for it is impossible, shouldn’t coverage of ER services be nationalized?… Emergency Medicine is only 2-5% of healthcare spending, but it does demonstrate that there really are parts of medicine where free market competition is impossible.

Can this line of thinking gain traction within some conservative circles? If there is any chance, some organizers argue, conservatives would have to see the policy as something reconcilable with their worldview. And the best means of persuasion may not be an appeal to emotion but to numbers.
“We have to reach some of conservatives if we are realistically going to make single-payer happen,” Paris said. “To do that, we have to … explain why the policy will benefit them.”

Clearly, a massive amount of public education will be necessary to win Medicare for All. Thanks to the Mercatus Center’s softball attack, the movement now has an effective and factual talking point: A right-wing group says Medicare for All raises wages, eliminate co-pays and deductibles — and does so while saving $2 trillion.