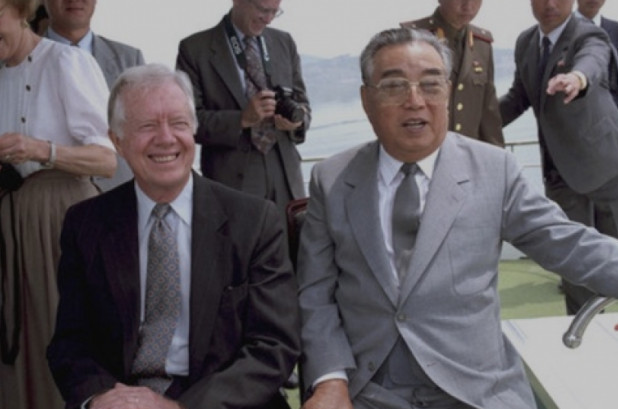 The United States is technically still at war with North Korea. No peace agreement has been signed despite repeated requests from Pyongyang for high-level negotiations. Former presidents Carter and Clinton and other high-level officials have gone to the North and achieved negotiation successes, but no sitting president had done so. Now Secretary of State Rex Tillerson, new to the job, has declared that decades of negotiations have not served to normalize relations, clearly unaware that American obstinacy and tit-to-tat overreactions are the main culprits.

In the extraordinary Agreed Framework of 1994, the United States promised to provide light-water reactors by 2003 to supply electric power in exchange for North Korean abandonment of nuclear weapons development to be verified by the International Atomic Energy Agency. The United States pledged never to go to war with North Korea and to begin negotiations for economic and political normalization of relations. Annual military exercises between South Korea and the United States, long seen in Pyongyang as a preparation for an invasion, were cancelled in 1994 and 1995 to show good faith. Washington removed North Korea from the list of “rouge states” 1n 1996.

What went wrong? The fact is that construction of the light-water reactors was never completed as promised, and fuel shipments were rarely delivered on time. Pyongyang thus had clear evidence that the 1994 agreement had been violated by the United States. North Korea then continued to develop a nuclear weapons program, and SK-US military exercises resumed in 1996.

Regarding missile development, an issue tied to the nuclear program, eight rounds of Six-Party Talks were held from 1996 to 2000. The result was a pledge from North Korea to stop testing missiles and an agreement to negotiate a peace treaty and normalize relations. Pyongyang also promised to freeze deployment, development, export, and production of missiles that might carry nuclear weapons.

After George W. Bush took office, all that progress ended when he declared in 2002 that Iran, Iraq, and North Korea constituted an “axis of evil.” North Korea then interpreted the speech as a declaration of war and resumed development of nuclear and missile capabilities.

Secretary of State Colin Powell corrected Bush’s error by joining Six-Party Talks, held from 2003 to 2008, with China, Japan, Russia, and South Korea in order to put pressure on the North to end missile and nuclear weapons programs. But in so doing, Bush moved the goalposts, additionally demanding economic and social reforms. In 2005, the American negotiator agreed that Pyongyang had a right to peaceful uses of nuclear power, but he reversed himself one month later, manifesting duplicity. The six countries, nevertheless, agreed on a three-phase solution in February 2007. But the United States later tried unsuccessfully to renegotiate the agreement unilaterally. Each time the Bush administration backtracked, Pyongyang responded with what Washington interpreted was a hostile provocation.

When Barack Obama became president, he was evidently unaware that North Korea was awaiting the delivery of fuel aid for electricity, as promised by the February 2007 agreement. North Korea tried to launch a satellite, which was misinterpreted in Washington as a violation of that agreement. Thereafter, American sanctions prompted further development of North Korea’s nuclear defense. Former presidents Jimmy Carter and Bill Clinton went to Pyongyang to gain the release of Americans arrested, reporting on their return that North Korea was open to negotiations.

In the Leap Year Agreement of February 2012, North Korea agreed to a moratorium on nuclear tests, suspension of uranium enrichment, and international inspection. But that was the last time serious bilateral negotiations were held. Once again, a satellite launch was misinterpreted in Washington as a violation of the agreement.

Instead, Obama’s policy of “strategic patience” involved awaiting the collapse of the regime by imposing sanctions while asking Beijing to pressure Pyongyang to achieve denuclearization. But China would never allow a shift in the strategic balance on its border and instead has repeatedly urged Washington to undertake negotiations.

So the current situation is a replay of the past. North Korea has undertaken nuclear and missile tests to provoke negotiations with the United States.  Annual American and South Korean military exercises are interpreted by Pyongyang as preparations for invasion.

President Donald Trump opened and closed back-channel negotiations early this year. China has proposed talks on the basis of a freeze in North Korea’s nuclear and missile programs, but Washington prefers sabre rattling instead of starting negotiations that were once extremely productive, with North Korea making far more concessions over the years than the United States.

Now is the time for negotiations in good faith.