Above Photo: Frida Berrigan, age 10, protesting in front of the White House next to Ched Myers and her father Phil Berrigan (right). (WNV/Berrigan family)

I was first arrested at the White House when I was 10 years old. My hair was pulled off my face by a blue bandana. I drew a penguin on my sign and wrote: “Reagan: Give Kids A Chance to Live.” My brother, a year younger, was arrested too, along with the activist and pediatrician Dr. Benjamin Spock. The arrest was a novel experience — the police officers were courtly. Jerry and I kept a quiet eye out for the elderly doctor’s pointy ears. It wasn’t until days later that we realized we hadn’t been arrested with Mr. Spock, Captain Kirk’s half Vulcan science officer.

Over the years, I’ve been arrested in front of the White House many times. As an adult, I’ve always felt a mixture of tension, excitement and righteousness — which is followed by brief terror, before being swept away amid the cheers and solidarity of supporters. Then the emotions switch to a compound of boredom and community-building in the holding areas or cells, as we wait for processing and release.

The beginning of that arrest process over these many years has always been the same: to stand still with a sign along the central stretch of the White House’s south sidewalk known as the “picture postcard zone.”

Not anymore. The picture postcard zone is now inaccessible. There is a permanent cordon that shortens the depth of the sidewalk by half. The White House fence is now protected by another fence and guarded by an armed officer behind an improvised bulletproof barrier. Pennsylvania Avenue, long a car-free promenade, is now often shut down and inaccessible to even the most appealing tourists.

This reordering of public space was announced by the Secret Service last April in response to a series of fence jumpings and security breaches that occurred during the final months of the Obama administration and the early days of Trump’s residency. A Secret Service plan for a nearly 12-foot fence surrounding the White House with “pencil point anti-climb fixtures” was approved and work will begin on this project sometime this year. In the meantime, it looks like the sidewalk is a no-go zone. 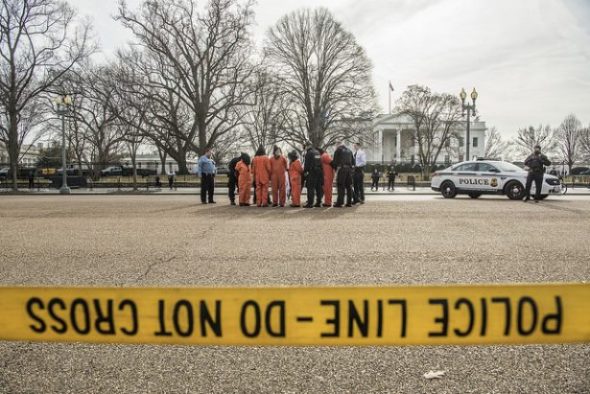 Five Witness Against Torture members were arrested on January 11 while attempting to take their message to the White House. (Flickr/Justin Norman)

I took in all these changes from beneath a black hood on January 11. I was at the end of a single-file line of 40 or so friends dressed in orange jumpsuits. We were at the White House to mark the 16th year of Guantanamo’s existence as a prison and torture chamber for Muslim and Arab men deemed to be terrorists and held since the beginning of the War on Terror. Now there are just 41 men being held, but under President Trump, even those cleared for release have almost no hope of ever being free.

Through the rally and interfaith prayer service, we maintained a specter-like stillness and silence, representing men like Sharqawi Al Hajj, a Yemeni who is the same age as me and has been held at Guantanamo for 14 years. He has never been charged with a crime. He was subjected to sustained interrogation and torture, undertook protracted hunger strikes to protest his detention and is now weakened and ill.

Our plan after the rally was to process across Pennsylvania Avenue to the White House sidewalk with our Shut Down Guantanamo banners and signs. But, met with cordons and barriers, we set up along the Lafayette Park curb to begin our ceremony of transformation.

As each Guantanamo name was read, the people dressed in orange were handed a cup bearing that name. I took the cup, pulled off my hood, drank the sweet tea and then set the cup down in front of our banner “Land of Liberty: 41 in Guantanamo, 2.3 million in U.S. prisons, 44,000 in immigration detention.” One after another we did this until all 41 lives, stories and humanities were represented. And then five of our group ducked under the police tape and tried to take our message across the street in front of the White House. They didn’t get 20 steps before they were intercepted and placed under arrest.

Brian Terrell, an activist with Voices for Creative Nonviolence, has been arrested in front of the White House countless times since the Carter administration and was arrested again on January 11. In a recent Common Dreams article describing his arrest, he noted that the sidewalk is cut in half. “This public forum,” he bemoaned, “a place of protest and advocacy for more than a century, the place where the vote for women and benefits for veterans were won, has been strangled to the point where no dissent is tolerated there.” 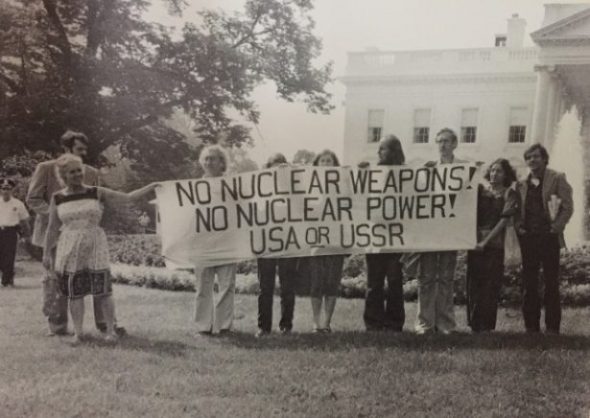 A War Resisters League protest on the White House lawn in September 1978.

There is a great picture of Grace Paley, Ralph DiGia and other members of the War Resisters League holding a banner on the White House lawn emblazoned with “No Nuclear Weapons! No Nuclear Power! USA or USSR.” It was 1978 and while their message needs little updating, their simple action would be essentially impossible these 40 years later. In the name of security, space for unfurling banners, holding signs and hearing speakers is too constricting. And it is not just in Washington, D.C.

A Special Rapporteur for the United Nations on freedom of assembly toured the United States during the summer of 2016 and concluded that “people have good reason to be angry and frustrated at the moment … and it is at times like these when robust promotion of assembly and association rights are needed most. These rights give people a peaceful avenue to speak out, engage in dialogue with their fellow citizens and authorities, air their grievances and hopefully settle them.” In most places it is not an overt curtailment of free speech but an effort to control, corral, extract permits and fees, the compounding of regulations and ordinances, that all results in more private space and less public space.

However, not all cities are going this route. Perhaps unsurprisingly, San Francisco is redesigning one of its central squares as place to gather, rally, organize and strike out from. Harvey Milk Plaza, named for the civil rights activist who became the first openly gay elected official in the United States, sits right on top of public transportation. The new design for the plaza — approved and slated to be built by 2020 — is an elevated, universally-accessible amphitheater and plaza that architects hope will support “a wide spectrum and scale of activity. An afternoon picnic with a friend or a small activist’s meetup on a Saturday or even a starting point for thousands of people to march down Market Street; the plaza welcomes everyone.” Sounds great, doesn’t it? Did I mention the design includes thousands of LED lights? Sounds like we need it yesterday.

There is a lot for us to do in this Trumpian time. Against the backdrop of his administration’s sweeping and systemic affront to us all, the narrowing of public, physical, political space might not seem like a big deal. But it is. I have my own attachment to the White House as the site of my first arrest, but it is more than that. Tyrants take away space.

I have always thought of that strip of sidewalk in front of the White House as “America’s front porch.” In one hour, you can talk to a world of tourists, see a world of issues expressed on banners of varying sophistication and art, and hear a cacophony of voices calling out for justice. Do a quick Google search of demonstrations at the White House to get a sense of the span of political issues and voices and faces that converge on that small bit of our shared topography to draw attention to their causes: Stop the Keystone XL Pipeline, No Deportation of Immigrants, Stop the Wars — alongside groups taking aim at everything from circumcision to the cruelty of circuses.