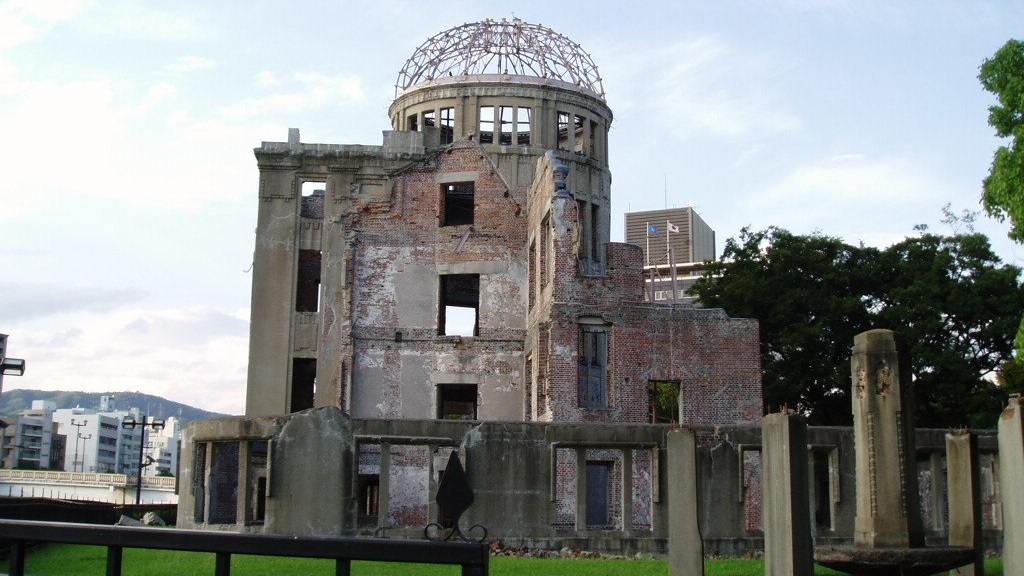 Above photo: The Hiroshima Peace Memorial which stands in memory of the nearly 140,000 people who were killed when the atom bomb was dropped on the city. Motokoka, CC BY-SA 4.0 , via Wikimedia Commons.

The Treaty on the Prohibition of Nuclear Weapons came into effect on January 22 but none of the nuclear weapons states are signatories.

In fact, the US, in October, asked those governments who signed the treaty to withdraw from it.

On January 22, 2021, the Treaty on the Prohibition of Nuclear Weapons (TPNW) became international law for the 122 states who signed the agreement in July 2017. The TPNW, as with most treaties, is summed up in one sentence (article 1a): “Each State Party undertakes never under any circumstances to… Develop, test, produce, manufacture, otherwise acquire, possess or stockpile nuclear weapons or other nuclear explosive devices.” There is no complexity here. This is a treaty to ban nuclear weapons.

Wilfred Burchett was the first non-Japanese journalist to visit Hiroshima. His first dispatch for London’s the Daily Express (September 5, 1945) was entitled “The Atomic Plague.” “In Hiroshima, 30 days after the first atomic bomb destroyed the city and shook the world,” Burchett wrote, “people are still dying, mysteriously and horribly… Hiroshima does not look like a bombed city. It looks as if a monster steamroller had passed over it and squashed it out of existence. I write these facts as dispassionately as I can in the hope that they will act as a warning to the world… The damage is far greater than photographs can show… It gives you an empty feeling in the stomach to see such man-made devastation.”

In 1952, Sakamoto Hatsumi—a primary school student who had experienced the terror of the bombing—wrote a short poem: “When the atomic bomb drops/day turns into night/people turn into ghosts.” It is simple and elegant, a plea from the darkness to abolish nuclear weapons. This is what the hibakusha, the survivors of the atomic nightmare of Hiroshima and Nagasaki, have been demanding since 1945. Their pleas have been heard around the world, but not in the capitals that have developed these hideous weapons.

Nine countries of the 193 member states of the United Nations possess nuclear weapons. Two of them—the United States of America and Russia—have more than 90% of all the 13,410 warheads. Four countries—the US, Russia, the UK and France—have at least 1,800 warheads on high alert, which means that they can be fired at very short notice.

To compare the warheads currently deployed with the atom bomb dropped on Hiroshima is enough to make the heart stop: the yield from the “Little Boy” used on Hiroshima is estimated at 15 kilotons, whereas the yield from one W88 warhead that is deployed on a Trident II submarine is estimated at 475 kilotons. It is not just the number of nuclear weapons that are available; the current nuclear weapons, many of them deployed on submarines and ships, are far more lethal.

None of the nine nuclear weapons states have joined the TPNW; they boycotted the negotiations and the vote in the United Nations General Assembly. In October 2020, the US government circulated a letter asking those governments who signed the treaty to withdraw from it. The US ambassador to the United Nations in 2017—Nikki Haley—said that the TPNW threatens the security of the United States; she condescended to the 122 governments that joined the TPNW, saying, “do they really understand the threats that we have?” Iran, incidentally, voted with 121 other countries for the TPNW.

Over the course of the past few years, the US administration has undermined the three core treaties for disarmament: “the Anti-Ballistic Missile (ABM) Treaty, the Intermediate-Range Nuclear Forces (INF) Treaty, and the Strategic Arms Limitation Treaty, which has now metamorphosed into the Strategic Arms Reduction Treaty (START),” as Prabir Purkayastha wrote in January 2020. Appetite for serious nuclear disarmament has simply not been evident. In fact, the Congressional Budget Office in the US estimates that the government will spend $1.2 trillion between 2017 and 2046 to modernize the US nuclear arsenal. The other eight nuclear weapons states will follow suit but far behind, since in these matters the United States drives this terrifying agenda.

While 122 countries voted to ban nuclear weapons, the United States pursued a project to threaten China with a nuclear attack. In August 2019, the US withdrew from the INF treaty, tested two intermediate-range missiles, and then posted an order for a variety of cruise and ballistic missiles. When the US government sought bases for these missiles around China, its Asian allies balked. They do not want to inflame the already tense situation between the United States and China.

Former US Secretary of State Mike Pompeo said in 2020 that the US “Department of Defense has ramped up its efforts” against China. These threats grew more and more explicit later that year. Biden’s nominee to be the new US Secretary of State Antony Blinken said that Donald Trump’s administration was right to be tough on China.

The presence of these missiles on US naval vessels and the development of hypersonic cruise missiles as well as open threats against China simply make it impossible for Beijing to dismantle its nuclear arsenal. To do so would be tantamount to surrender before a US attack. China’s government, meanwhile, has said that it welcomes the establishment of nuclear-free zones, including the Southeast Asian Nuclear-Weapon-Free Zone (SEANWFZ) Treaty.

At a press briefing in July 2020, Fu Cong, China’s director-general of the Department of Arms Control and Disarmament in the Ministry of Foreign Affairs, said that his country would be willing to enter into disarmament negotiations if the US arsenal (at 5,800 nuclear missiles) drops down to the Chinese level (300 nuclear missiles). “The US knows full well the huge gap between the Chinese and American nuclear arsenals, both in terms of quantity and sophistication,” said Fu Cong. “For the US, hyping up the China factor is nothing but a ploy to divert world attention, and to create a pretext, under which they could walk away from the New START, as they have done on so many other arms control treaties. The real purpose is to get rid of all possible restrictions and have a free hand in seeking overwhelming military superiority over any adversary, real or imagined.”

Nuclear disarmament has a long history. In 1961, the US and the USSR signed the McCloy-Zorin Accords or the Agreed Principles for General and Complete Disarmament, which called for “general and complete disarmament” but also that war should “no longer [be] an instrument for settling international problems.” Gone is that spirit. It needs to be revived.