In 2012, US Secretary of the Interior Ken Salazar announced a twenty-year ban on mining surrounding the Grand Canyon National Park. It was one of the biggest wins for the environment that year. After all, 10,000 uranium mining claims threatened to turn this iconic natural landscape into a radioactive wasteland.

The moratorium put an end to all that — at least for the next 20 years.

Unfortunately, our celebration of the historic decision had consequences. It drowned out two pressing facts that the media urgently needed to focus on: there were at least four old uranium mines near the Grand Canyon that could be reopened despite the moratorium; and there were still hundreds of abandoned uranium mines on Navajo (Diné) land that needed remediation.

The Arizona 1 mine, the Kanab North mine, the Pinenut mine, and the Canyon mine were then-owned by Canada’s Denison Mines Corporation. In 2012, Energy Fuels Inc. (EFR) acquired all of Denison’s assets and operations in the United States.

One by one, the Arizona 1, Canyon and Pinenut mines returned to life and nobody said anything. These mining operations were just too small or too far away for the media to take notice.

After the Canyon mine re-opened, Energy Fuels was forced to temporarily suspend operations and await the outcome of a federal district court ruling. The Havasupai Tribe, the Grand Canyon Trust and other plaintiffs sued the U.S. Forest Service (USFS) for letting Energy Fuels re-open the mine without consulting the Havasupai.

The plaintiffs also took issue with the fact that USFS failed to carry out additional environmental reviews. Energy Fuels wants operate the Canyon mine — with the government’s approval — using an Environmental Review that was originally approved in the 1980s.

The Canyon mine poses a significant threat to the Havasupai’s water supply. The project is located five miles from the south rim of the Grand Canyon — directly above a groundwater aquifer that feeds into local seeps and springs including Havasu Springs and the Havasupai’s main source of water, Havasu Creek. 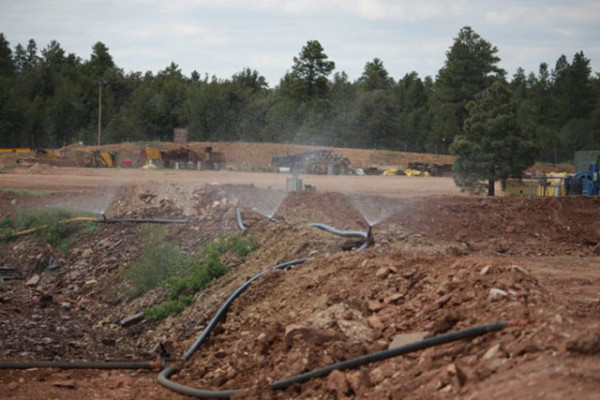 Sprinklers are used to contain uranium dust particles at the Canyon mine. (Photo: Garet Bleir)

Given that the Arizona Department of Environmental Quality (ADEQ) does not require monitoring of deep aquifers, remediation plans or bonding to prevent deep aquifer contamination, the mine runs a genuine risk of contaminating the Havasupai’s water supply.

According to the Grand Canyon Trust, water filling the 1,475-foot mine shaft at Canyon Mine, if contaminated, could potentially flow through rock fissures and pollute the groundwater aquifer. Last April, water in this retention pond tested at 130 parts of dissolved uranium per billion, more than three times the federal drinking water standard.

The Canyon mine also poses a significant threat to the Havasupai’s culture and religion. This mine is situated a short jog away from Red Butte or “Wii’i gdwiisa” (clench fist mountain).

The Havasupai say that the destruction of this Traditional Cultural Property would destroy them and their world. 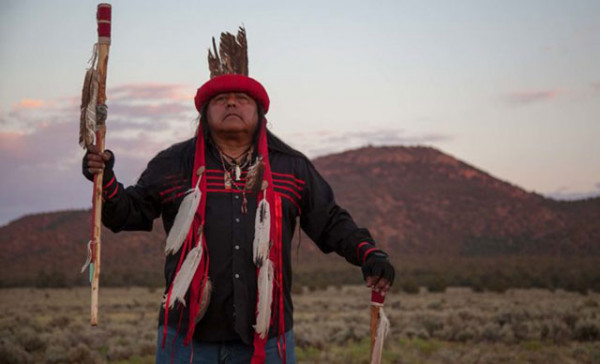 Richard Watahomigie, descendant of the first Havasupai leader. Pictured in front of Red Butte, sacred site for the Havasupai Tribe and at risk from the Canyon Mine. (Photo: Garet Bleir)

Red Butte is also culturally significant to the Diné and Hopi Nations, along with the Hualapai, Kaibab Paiute, and Zuni. 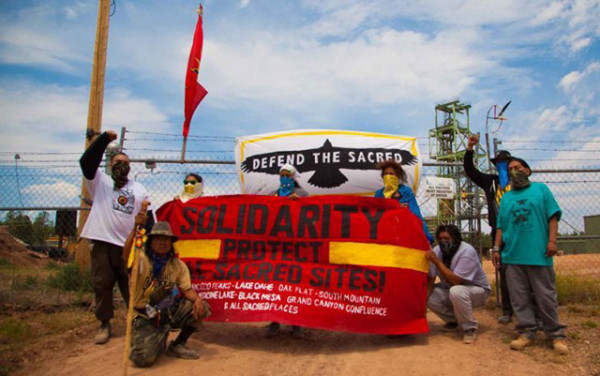 Representatives from the Havasupai Tribe, Haul No!, Center for Biological Diversity, Sierra Club, and Grand Canyon Trust, among others, gathered at the gates of the Canyon Mine. (Photo: Garet Bleir)

If the pending lawsuit fails, the Canyon mine would produce as much as 109,500 tons of high-grade uranium ore per year. As much as 13,100 tons of that ore would be stored on-site. The rest would be sent to the White Mesa Mill near Blanding, Utah. 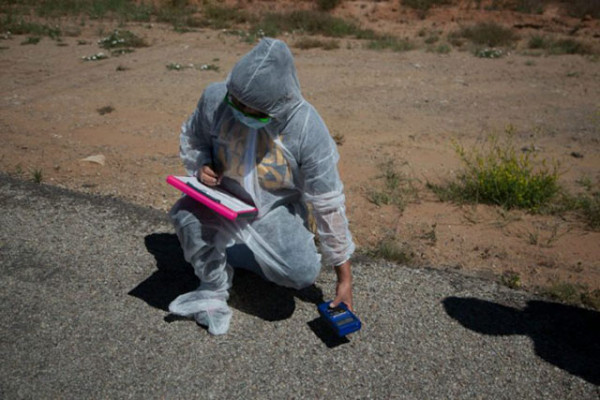 Leona Morgan, representative from “Haul No!” and co-founder of the organization “Dine No Nukes,” takes radioactivity readings around the White Mesa Mill. Last year there was a radioactive spill in this area. (Photo: Garet Bleir)

Each and every day, 25 flatbed trucks would take 750 tonnes of radioactive ore on a 300-mile journey through major towns and cities like Flagstaff, AZ. Along the way, it would cross over two key Colorado River tributaries (the San Juan River and Little Colorado River) and traverse 180 miles across the Navajo reservation.

There are few safety precautions in place to ensure that this controversial haul route doesn’t expose the public to dangerous levels of radiation; Energy Fuels would simply use tarps to cover the raw uranium ore. 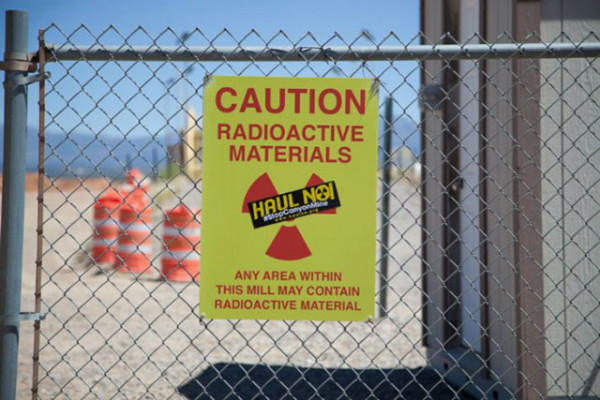 The White Mesa Mill — examined in the Grand Canyon Trust’s short film, Half Life: America’s Last Uranium Mill — is a controversy unto itself.

This mill is located on the sacred ancestral lands of the Ute Mountain Ute tribe above the Navajo Sandstone aquifer. 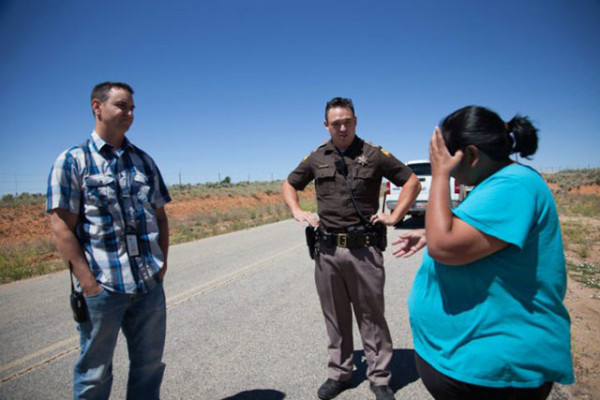 The site of the mill hosts over 200 cultural sites of significance including burial sites, kivas, and artifacts. During its construction, several cultural sites were demolished. Like the Havasupai, the Ute Mountain Ute Tribe was never consulted before mill construction began.

The mill, which operated without a valid environmental license for a decade, regularly releases radioactive and toxic air pollutants into local communities. These contaminants include radon, thoron, sulfur dioxide, and nitrogen oxides. 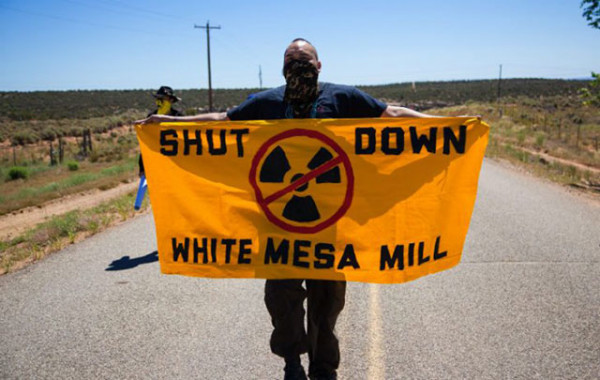 Bobby Mason, representative of “Haul No!”, carries a “Shut Down White Mesa Mill” sign through the gates of the mill. (Photo: Garet Bleir)

Even without the Canyon mine and the White Mesa mill, the Grand Canyon watershed is suffering from the impacts of uranium mining dating back to the Cold War. According to the US Geological Survey (USGS), the region’s fifteen springs and five wells currently exhibit levels of radiation that exceed the Environmental Protection Agency’s (EPA) safe drinking water standards.

This does not bode well for the region’s wildlife — not to mention any of the 40 million Americans using water from the Colorado River. 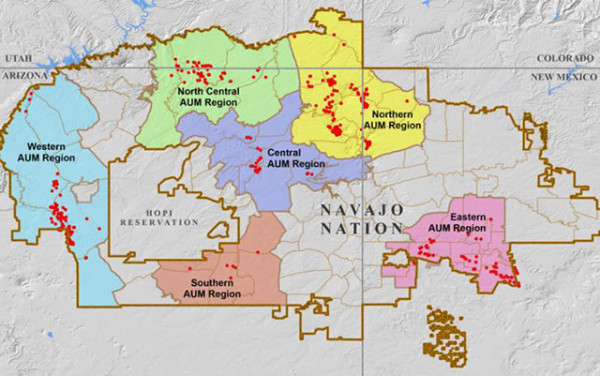 While no studies have been carried out to determine the impact of radiation exposure on the Diné population, a disproportionate number of people on the reservation are suffering from organ failure, kidney disease, loss of lung function, and cancer.

There’s more. With President Trump’s recent cuts to the EPA, the recent discovery of Copper at the Canyon mine, and the Koch Brothers’ newly launched campaign to remove the permanent uranium mining ban that President Roosevelt established in 1908, we are witnessing an unprecedented bloom of threats to the Grand Canyon, the Colorado River and everyone that depends on it. 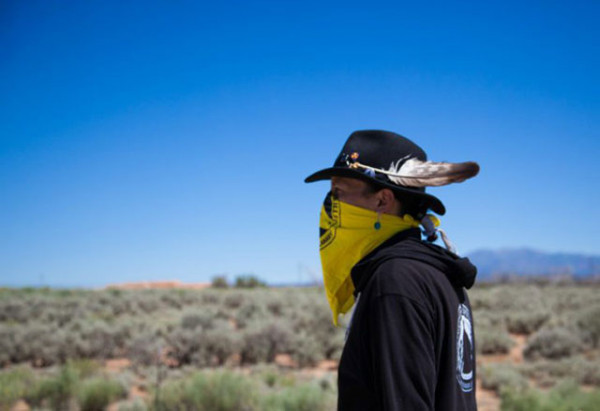 Klee Benally, representative of “Haul No!” walks through the gates of the White Mesa Mill to hold a demonstration. (Photo: Garet Bleir)

But there is hope. A group calling itself “Haul No!” is running a campaign to educate the public and build support to stop the Canyon mine. Meanwhile, Members the Navajo Nation are working to enforce a ban on the transport of uranium ore through the reservation. And the White Mesa Ute are actively leading protests against the uranium mill.

We’ve traveled to the Grand Canyon to investigate the risks and impacts of the Canyon mine and processing mill, to report on the outcomes of the pending lawsuit (a decision is expected any day), to shine a light on the emerging movement and to serve as witness in the event of confrontation local law enforcement.

During our time here we’re also collecting a diverse range of perspectives through interviews with EPA, ADEQ, USFS and EFR officials; leaders from the Ute Mountain Ute, Havasupai, Navajo, and Hopi communities and key political players at the state and local levels.

On top of that, we’re taking the time to sit down with Diné citizens who already feel the health impacts of uranium mining without consent.

It’s a big job; but somebody’s got to do it.

John Ahniwanika Schertow is an award-winning journalist and multimedia artist of Mohawk and European descent. For over a decade, John has served as the driving force behind Intercontinental Cry (IC), a new media outlet which he also founded. As a poet and freelance journalist, John’s work has been featured in the Guardian, Toward Freedom, the Dominion, Madre, Swerve Magazine and many other publications. A regular guest on CKUW, John also serves as a Director at the Center for World Indigenous Studies and a Web Designer for the Oneidas for Democracy.

Garet Blair is a contributor to Intercontinental Cry.