Why We’re Kayaking To The Pentagon, And Why You Should Join Us

One week before the #NoWar2017: War and the Environment conference, to be held September 22-24 at American Univeristy, World Beyond War will work with the Backbone Campaign and other allies to organize a flotilla for the environment and peace, bringing kayaktivism to Washington, D.C., on September 16th.

Why? What’s the relevance? Who’s drilling for oil on the Potomac?

Actually the Potomac is central headquarters for oil consumption, as the top way in which we consume oil is through preparing for and waging wars — wars that are often in large part motivated by the desire to control more oil.

Behind the Pentagon is a 9/11 memorial, but there’s no memorial to the future Pentagon disaster that will come in the form of flooding.

The U.S. military is the top consumer of petroleum around and would rank high by that measure in a list of countries, were it a country. The military is the third worst polluter of U.S. waterways. The United States could convert to entirely sustainable energy for a fraction of the U.S. military budget (and earn it all back in healthcare savings).

Most countries on earth have the U.S. military in them. Most countries on earth (the entire countries!) burn less fossil fuel than does the U.S. military. And that’s without even calculating how much worse for the climate jet fuel is than other fossil fuels. And it’s without even considering the fossil fuel consumption of the world’s leading weapons makers, or the pollution caused by the use of those weapons all over the world. The U.S. is the top weapons dealer to the world, and has weapons on multiple sides of most wars. 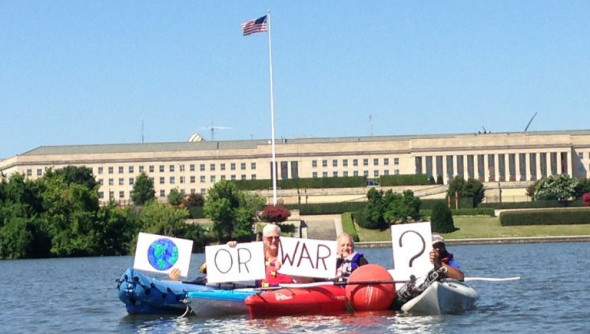 When the British first developed an obsession with the Middle East, passed along to the United States, the desire was to fuel the British Navy. What came first? The wars or the oil? It was the wars. Wars and the preparations for more wars consume a huge amount of oil. But the wars are indeed fought for control of oil. So-called foreign intervention in civil wars is, according to comprehensive studies, 100 times more likely — not where there is suffering, not where there is cruelty, not where there is a threat to the world, but where the country at war has large reserves of oil or the intervener has a high demand for oil.

We need to learn to say “No More Wars for Oil” and “No More Oil for Wars.”

You know who agrees with that? Pre-presidential campaign Donald Trump. On December 6, 2009, on page 8 of the New York Times a letter to President Obama printed as an advertisement and signed by Trump called climate change an immediate challenge. “Please don’t postpone the earth,” it said. “If we fail to act now, it is scientifically irrefutable that there will be catastrophic and irreversible consequences for humanity and our planet.”

In fact, Trump is now acting to speed up those consequences, an action prosecutable as a crime against humanity by the International Criminal Court — at least if Trump were African. It’s also a crime impeachable by the United States Congress — at least if there’s some way to involve sex in it. Holding this government accountable is up to us. 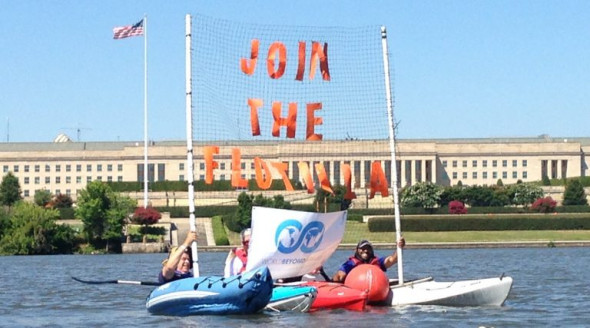 While militarism is a top cause of climate change, control of fossil fuels is a top motivation for wars. Wars are not “caused by” climate change in the absence of any human decisions to go to war, but people who choose war often do so in response to the sorts of crises that environmental destruction is creating. Learn more here or at our conference. Pro-environment and pro-peace activists are learning to work together. This is an exciting time!

WHERE: The Pentagon Lagoon right in front of the Pentagon.

Boating access to the Pentagon Lagoon is located at the boat launch area at the Columbia Island Marina. The Marina may be accessed by car from the southbound lanes of the George Washington Memorial Parkway.

The Lagoon has relatively still water, sheltered from the forces of the wind and the current in the Potomac River. We will paddle our kayaks, canoes, row boats, sail boats, and inflatable rafts a very short distance to the perfect spot for photographs. This is about the easiest boating experience imaginable outside of a swimming pool or bathtub. But we want safety to be the top priority. Everyone must have a life jacket. And we are offering two free optional kayak training sessions, on August 12 in St. Mary’s City, MD, and August 26, at the Columbia Island Marina (sign up for one or both when you click here to join the flotilla).

Please consider bringing signs and/or wearing appropriate shirts, such as these or these.

Flotilla for Environment and Peace!

This Water Is Rising Because of That Building

Washington Will Sink Under Pentagon Spending

No More Wars For Oil

No More Oil for Wars

In memory of Jay Marx! 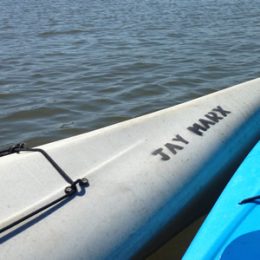 Jay Marx was a legendary DC-based peace and justice activist who died in a terrible accident two years ago. Jay would have loved this action. Jay Marx Presente!