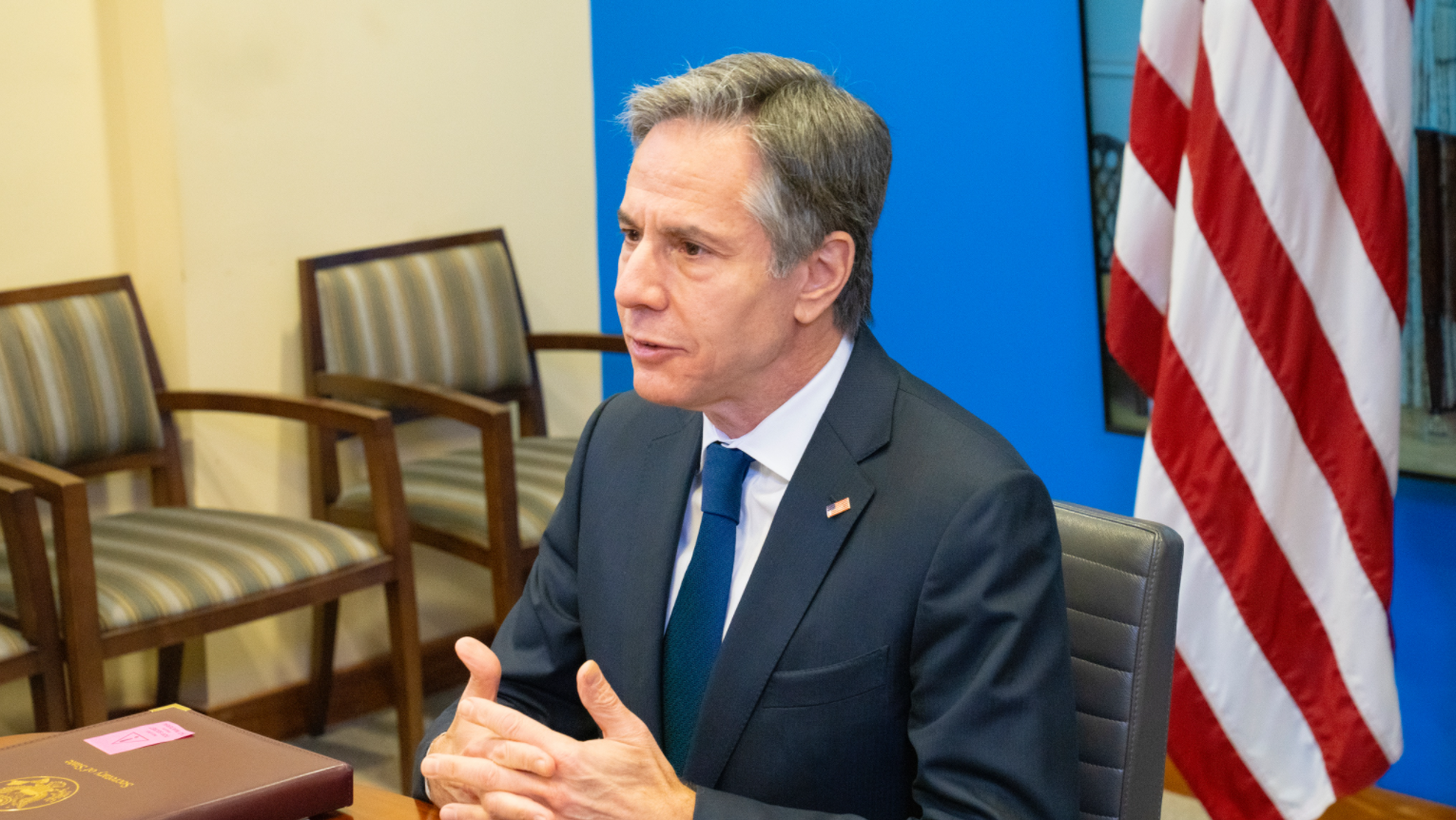 Above photo: US Secretary of State Antony Blinken.

The US government’s information warfare against China has produced the “fact” that there is genocide in Xinjiang.

Once this has been established, it helps develop diplomatic and economic warfare.

On March 22, 2021, US Secretary of State Antony Blinken authorized sanctions against Wang Junzheng, the secretary of the Chinese Communist Party Committee of the Xinjiang Production and Construction Corps (XPCC), and Chen Mingguo, director of the Xinjiang Public Security Bureau (XPSB). These sanctions, Blinken said, have been put in place against Wang Junzheng and Chen Mingguo because they are accused of being party to “genocide and crimes against humanity in Xinjiang.” The US Treasury Department followed suit with its own sanctions.

The United States pivots to Asia

In October 2011, then US Secretary of State Hillary Clinton had announced a “pivot to Asia,” with China at the center of the new alignment. While Clinton had said on numerous occasions—including in Hawaii in November 2011—that the administration of former US President Barack Obama wanted to develop “a positive and cooperative relationship with China,” the US military buildup along Asia’s coastline told a different story. The 2010 US Quadrennial Defense Review noted “China’s growing presence and influence in regional and global economic and security affairs” and called it “one of the most consequential aspects of the evolving strategic landscape.” In 2016, US Navy Admiral Harry Harris, head of the Pacific Command, had said that the United States was ready to “confront China,” a statement given strength by the US military buildup around China.

The Trump and Biden administrations have largely followed the “pivot to Asia” policy, with a special emphasis on China. The United States has been struggling to keep up with China’s rapid scientific and technological advancements and has few intellectual or industrial tools in place to compete. This is the reason why it has tried to stall China’s advances using diplomatic and political power, and through information warfare; these elements comprise what is called a “hybrid war.”

Prior to a March 2019 event co-hosted by the US Mission to International Organizations in Geneva, most people in countries like the United States were largely unaware of the existence of the Xinjiang region in China, let alone of the 13 million Uyghur people (one of China’s 55 recognized ethnic minorities). Given that the Uyghurs are the demographic majority in this westernmost province of China, the official name of the administrative unit is the Xinjiang Uyghur Autonomous Region.

The March 2019 event featured Adrian Zenz, a German researcher and a senior fellow in China studies at the Victims of Communism Memorial Foundation, an organization founded in 1993 by the US government to promote anti-communist views. In April 2020, this foundation—against all evidence—accused China of being responsible for the global deaths resulting due to the spread of COVID-19. Zenz is also associated with the conservative defense policy think tank the Jamestown Foundation, founded by William Geimer, who was close to the Reagan administration.

Zenz and Ethan Gutmann, another researcher at the Victims of Communism Memorial Foundation, would continue to repeat their conclusions regarding the genocide in Xinjiang to the US Congress and in a range of mainstream publications. Hosted by the BBC and Democracy Now, Zenz provided what appeared to be documentation of atrocities meted out by the “Chinese authorities” against the Uyghur population. Zenz and Gutmann would be joined by organizations funded by Western governments but which—as NGOs—pose as independent research and advocacy groups (such as the Global Center for the Responsibility to Protect and the Uyghur Human Rights Project; the former is funded by Western governments and the latter by the U.S. government’s National Endowment for Democracy).

In June 2020, then US Secretary of State Mike Pompeo attacked the Chinese government, basing his statements on Xinjiang on the “German researcher Adrian Zenz’s shocking revelations.” Zenz, who is a US government-funded researcher from the intelligence-connected Jamestown Foundation, provides a set of scientifically dubious and politically charged papers, which are then used as fact by the US government in its information war against China. Anyone raising questions about Zenz’s claims is, meanwhile, marginalized as a conspiracy theorist.

The US government’s information warfare against China has produced the “fact” that there is genocide in Xinjiang. Once this has been established, it helps develop diplomatic and economic warfare.

On March 22, 2021, the same day as the US sanctions, the Council of the European Union unilaterally imposed asset freezes and travel bans on four Chinese government officials, including Wang Junzheng and Chen Mingguo, as well as Wang Mingshan and Zhu Hailun. The United Kingdom and Canada also joined in this venture that day. It appeared to be a coordinated diplomatic assault on China in order to portray China as a country violating human rights. This assault came soon after China had achieved a major human rights goal, lifting 850 million people from absolute poverty. The US government and its media outlets tried to challenge this remarkable human rights achievement.

Trump had pushed a trade war with China as soon as he came into office in January 2017; his policy framework remains in place under Biden. To draw together the trade war and the Xinjiang information war, in mid-December 2020, Adrian Zenz and the Newlines Institute for Strategy and Policy (formerly the Center for Global Policy) released an intelligence brief on “coercive labor in Xinjiang.” The claims in this briefing—building on a 2019 Wall Street Journal article on the supply chains and Xinjiang—created a media firestorm in the West, amplified by Reuters and then picked up by many widely read outlets; it led to the US government ban on Xinjiang cotton.

A third of the world’s textiles and clothing come from China, with the country accounting for $120 billion in exports of these products per year and $300 billion in exports of all merchandise annually. According to China’s National Bureau of Statistics, 87% of China’s total cotton output comes from Xinjiang. Most of the high-quality Xinjiang cotton—and the textiles produced from it within China—go to Western apparel companies, such as H&M and Zara. In 2009, many of these companies created the Better Cotton Initiative (BCI), which has—until last year—been upbeat about developments in Xinjiang (including co-ops of small farmers in Xinjiang). As recently as March 26, 2021, the BCI made a clear statement: “Since 2012, the Xinjiang project site has performed second-party credibility audits and third-party verifications over the years, and has never found a single case related to incidents of forced labor.”

Despite the BCI’s recent confident statement and its optimism, things are rapidly changing for Xinjiang cotton farmers as the BCI appears to get on board with the US’s intensifying hybrid war on China. The BCI closed down its page on its work in China, accused China of “forced labor” and other human rights violations, and set up a Task Force on Forced Labor and Decent Work.

Officials from Xinjiang’s government contested these claims, saying that much of the field labor for cotton in Xinjiang has already been replaced by machines (many of them imported from the US firm John Deere). A recent book edited by Hua Wang and Hafeezullah Memon—Cotton Science and Processing Technology—confirms this point, as do a range of media reports from before 2019. Facts like these don’t seem to stand a chance in the overwhelming information war. Xinjiang—two and a half times the size of France—is now at the epicenter of a cold war not of its own making.

Jie Xiong is a Chinese technologist, translator and editor. He has participated in the digitization process of multiple leading enterprises in China. He is a founder of Shanghai Maku Cultural Communications Ltd., a company that introduces China to Global South readers. He is a senior researcher at the Sichuan Institute for High Quality Development. He has written and translated more than 10 books. His latest translation is Cybernetic Revolutionaries.