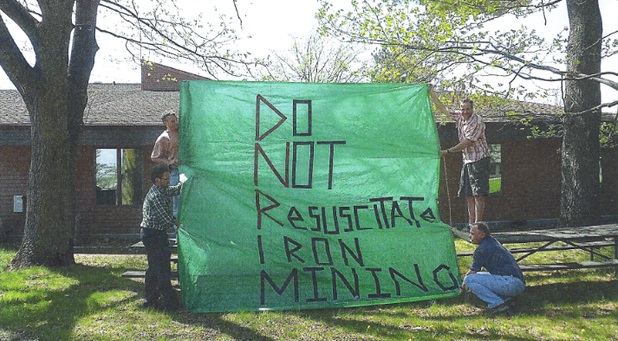 WI Land Closed Due To Eco-terrorism So Mining Can Proceed

Above photo: Make Them Pay, Environmentalists say they want to make Gogebic Taconite pay before the northern Wisconsin mine company has a chance to get development off the ground.

The state Department of Natural Resources announced Friday that a mining company temporarily closed land in northern Wisconsin Thursday in order to begin mining-related activities, a controversial project that has drawn protests and the threat of lawsuits.

Gogebic Taconite, with the consent of landowner RGGS Land & Minerals, closed 1,236 of its roughly 3,500 acre mining site — which are included in the state’s managed forest land program — while private roads on the land are used for mining-related activity. A map of the closed land that straddles the border of Ashland and Iron counties is available here.

In a statement, DNR officials said the closure still allows for public access to the closed lands by foot to fish and hunt, under two specific conditions.

First, the public may access the closed lands by foot within 50 feet of a Class 1 or Class 2 trout stream for the purposes of fishing. Second, the closed land will be open exclusively for deer hunting purposes during the nine-day gun-deer season.

Contrary to other private land in the state’s managed forest land program, the prospective mining site is being allowed to close because of bill authored by Sen. Tom Tiffany, R-Hazelhurst, in response to what he called “acts of eco-terrorism.” Gov. Scott Walker signed the bill into law at the end of 2013.

Last summer, protesters clashed with mining workers at the site. One woman was arrested and charged. A private security company was hired and armed guards now patrol the mining site.

Those opposed to the mine are concerned about its impact on nearby wetlands, rice beds sacred to Native American tribes and numerous trout streams and waterways near the mining site.

Tiffany and Gogebic officials said the temporary closure is necessary to protect workers. Critics of the plan say the mining company is being given special treatment — as the bill was written specifically for project — and is allowing them to close land without immediately paying back nearly $900,000 in unpaid taxes, as other landowners in the state’s managed forest land program would have to do if closing land to the public.

Private landowners in the managed forest land program are given a tax break in exchange for keeping the land open to the public for recreational uses like hiking, fishing and hunting. Temporary land closures are typically not allowed.

Because Tiffany’s bill was signed into the law, the company will pay, in addition to its acreage share tax, an amount equal to 15 percent of the average statewide property tax per acre for lands that are not open to all of the outdoor recreational activities for any part of the previous calendar year.

According to Jim Warren, the public and private forestry section chief with the DNR, all the land will reopen to the public when either the DNR approves or denies the permit; the mining company no longer has an interest in mining the land; or Dec. 14, 2015.