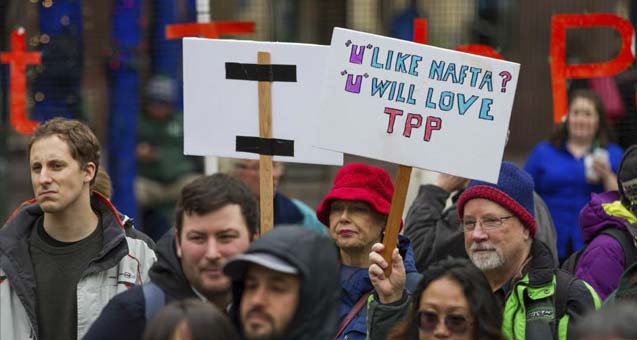 Embattled WikiLeaks publisher Julian Assange announced Wednesday from London the publication of a secret draft text of the Trade in Services Agreement (TISA), a controversial global trade agreement said to make it easier for corporations to make profits and operate with impunity across borders.

The whistleblower and transparency website WikiLeaks published on Thursday the secret draft text of the Trade in Services Agreement (TISA) Financial Services Annex, a controversial global trade agreement promoted by the United States and European Union that covers 50 countries and is opposed by global trade unions and anti-globalization activists.

Activists expect the TISA deal to promote privatization of public services in countries across the globe, and WikiLeaks said the secrecy surrounding the trade negotiations exceeds that of even the controversial Trans-Pacific Partnership Agreement (TPPA) that has made headlines in the past year.

Demonstrations erupted in Geneva in April as diplomats met in secret for the sixth round of negotiations over TISA, which would cover international trade in a wide range of service industries ranging from finance and telecommunications to transportation and even local utilities such as water. Protesters demanded that the draft text be released, but it has remained secret until now.

Public Services International (PSI), a global trade union federating public service workers in 150 countries, has reported that TISA threatens to allow multinational corporations to permanently privatize vital public services such as healthcare and transportation in countries across the world.

“This agreement is all about making it easier for corporations to make profits and operate with impunity across borders,” said PSI General Secretary Rosa Pavanelli in response to the leak. “The aim of public services should not be to make profits for large multinational corporations. Ensuring that failed privatizations can never be reversed is free-market ideology gone mad.”

The leak comes two years to the day that WikiLeaks publisher Julian Assange began hiding in the Ecuadorian embassy in London after the country offered him asylum to evade prosecution in the United States for publishing secret US government documents. Assange is also wanted in Sweden for questioning over sexual assault allegations lodged against him in 2010.

The secrecy of the TISA negotiations “exceeds even the controversial Trans-Pacific Partner Agreement (TPPA) and runs counter to moves in the WTO towards greater openness,” wrote Jane Kelsey, a law professor at the University of Auckland in New Zealand who analyzed the leaked documents on behalf of Wikileaks, which leaked portions of the TPPA in the past.

The same governments that installed the failed global trade deregulation models in the World Trade Organization that lead to the global financial meltdown are now promoting TISA, according to Kelsey and WikiLeaks.

Kelsey’s analysis also confirms the concerns of trade unions like PSI that the TISA agreement would lock governments into and extend their current levels of deregulation and trade liberalization, thus preventing governments from returning public services into public hands when privatizations fail and establishing greater regulations to protect the environment and workers safety.

The US Chamber of Commerce, which supports privatization and global trade deregulation, has said that the “payoff from TISA could be huge” for domestic service industry firms and presents “a once-in-a-generation opportunity to tear down barriers to international trade.”

The Chamber has recommended that TISA “eliminate regulatory inconsistencies” and ensure that private companies are not put at a disadvantage when they compete with “state-owned enterprises.”

The TISA countries will meet again for a seventh round of negotiations in Geneva from June 23 to 27.

Assange has been living in the Ecuadorian embassy since the country accepted his request for asylum two years ago out of fear that he would be extradited to the United States to face criminal charges for publishing thousands of US military documents and diplomatic cables in 2010.

Assange and his supporters fear that, if he leaves the embassy, he will be arrested and brought to Sweden to face questioning from prosecutors over sexual assault allegations made by two women in 2010. From Sweden, his attorneys said, Assange would be given a “one-way ticket” to the United States. Assange’s attorneys said they have invited Swedish prosecutors to question him at the embassy in London or over Skype, but the prosecutors have refused.

New information on the Swedish case against Assange will be revealed next week, Assange’s legal council said, but they declined to elaborate on the nature of the information.

For the past two years, London police have kept the embassy under surveillance and stood ready to arrest Assange should he leave the building, which has cost British taxpayers $10 million, according to reports.

Assange said he continues to be the target of “the largest ever criminal investigation into a publisher by the US Department of Justice,” and demanded that Attorney General Eric Holder end its investigation of WikiLeaks or resign. He also warned President Obama about leaving office with a legacy that includes “extrajudicial killings, including those of Americans” and chilling free speech by targeting more journalists for investigation than “all other presidents combined.”

“It is against the stated principles of the United States, and, I believe, the values supported by its people, to have a four-year criminal investigation against a publisher,” Assange said. “The ongoing existence of that investigation produces a chilling effect, not just on internet-based publishers, but all publishers.”

While hiding in the embassy, Assange said he has been busy working as a trustee for the Courage Foundation, a defense fund for NSA whistleblower Edward Snowden.

When asked about the conditions of his exile in the embassy, Assange pointed out that Chelsea Manning, the US intelligence analyst who was sentenced to 35 years in prison last year for leaking secret US military documents to WikiLeaks, was in much more difficult circumstances. Assange said Manning’s “ongoing situation” remains a “big concern.”

The government leaks provided by Manning and Snowden gave journalists and the world an invaluable and unprecedented look into US military operations in Iraq and Afghanistan, US foreign policy and the US government’s vast worldwide intelligence network, but the federal government contends the leaks compromised national security.