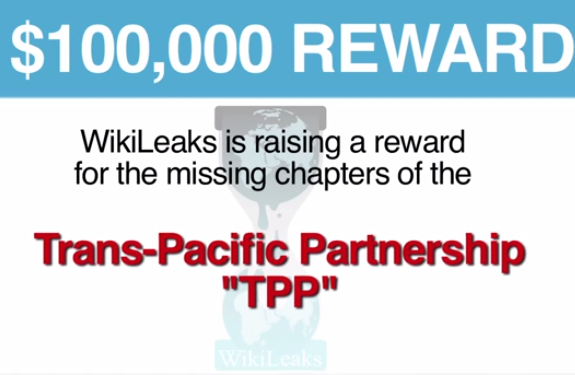 Note: Sign our petition demanding that the text be released to the public.

Today WikiLeaks has launched a campaign to crowd-source a $100,000 reward for America’s Most Wanted Secret: the Trans-Pacific Partnership Agreement (TPP).

Over the last two years WikiLeaks has published three chapters of this super-secret global deal, despite unprecedented efforts by negotiating governments to keep it under wraps. US Senator Elizabeth Warren has said

“[They] can’t make this deal public because if the American people saw what was in it, they would be opposed to it.”

The remaining 26 chapters of the deal are closely held by negotiators and the big corporations that have been given privileged access. Today, WikiLeaks is taking steps to bring about the public’s rightful access to the missing chapters of this monster trade pact.

The TPP is the largest agreement of its kind in history: a multi-trillion dollar international treaty being negotiated in secret by the US, Japan, Mexico, Canada, Australia and 7 other countries. The treaty aims to create a new international legal regime that will allow transnational corporations to bypass domestic courts, evade environmental protections, police the internet on behalf of the content industry, limit the availability of affordable generic medicines, and drastically curtail each country’s legislative sovereignty.

The TPP bounty also heralds the launch of WikiLeaks new competition system, which allows the public to pledge prizes towards each of the world’s most wanted leaks. For example, members of the public can now pledge on the missing chapters of the TPP.

“The transparency clock has run out on the TPP. No more secrecy. No more excuses. Let’s open the TPP once and for all.”

Note: The TPP is also noteworthy as the icebreaker agreement for the giant proposed ’T-treaty triad’ of TPP-TISA-TTIP which extends TPP style rules to 53 nations, 1.6 billion people and 2/3rds of the global economy.