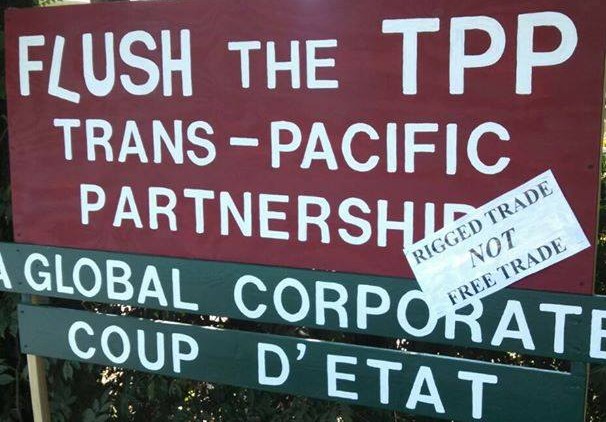 The TPP has been shrouded in secrecy from the beginning because the Obama administration knows that the more people know about it, the more they will oppose the agreement. The release of the full Intellectual Property chapter today by Wiikileaks confims what had been suspected, the Obama administration has been an advocate for transnational corporate interests in the negotiations even though they run counter to the needs and desires of the public.

This is not surprising since we already knew that 600 corporate advisers were working with the US Trade Representative to draft the TPP.  This means that for nearly four years some of the top corporate lawyers have been inserting phrases, paragraphs and whole sections so the agreement suits the needs of corporate power, while undermining the interests of people and planet.

Now from these documents we see that the US is isolated in its aggressive advocacy for transnational interests and that there are scores of areas still unresolved between the US and Pacific nations. The conclusion: the TPP cannot be saved.  It has been destroyed by secret corporate advocacy.  It needs to be rejected.  Trade needs to be negotiated with a new approach — transparency, participation of civil society throughout the process, full congressional review and participation, and a framework that starts with fair trade that puts people and planet before profits.

Congress needs to reject Fast Track Trade Promotion Authority as these documents show the Obama administration has been misleading the people and the Congress while trying to bully other nations.  This flawed agreement and the secrecy essential to its becoming law need to be rejected.

For more on the TPP visit www.FlushTheTPP.org

Today, 13 November 2013, WikiLeaks released the secret negotiated draft text for the entire TPP (Trans-Pacific Partnership) Intellectual Property Rights Chapter. The TPP is the largest-ever economic treaty, encompassing nations representing more than 40 per cent of the world’s GDP. The WikiLeaks release of the text comes ahead of the decisive TPP Chief Negotiators summit in Salt Lake City, Utah, on 19-24 November 2013. The chapter published by WikiLeaks is perhaps the most controversial chapter of the TPP due to its wide-ranging effects on medicines, publishers, internet services, civil liberties and biological patents. Significantly, the released text includes the negotiation positions and disagreements between all 12 prospective member states.

The TPP is the forerunner to the equally secret US-EU pact TTIP (Transatlantic Trade and Investment Partnership), for which President Obama initiated US-EU negotiations in January 2013. Together, the TPP and TTIP will cover more than 60 per cent of global GDP.

WikiLeaks published the complete draft of the Intellectual Property chapter for the Trans-Pacific Partnership (TPP), a proposed international commercial pact between the United States and 11 Asian and Latin American countries.