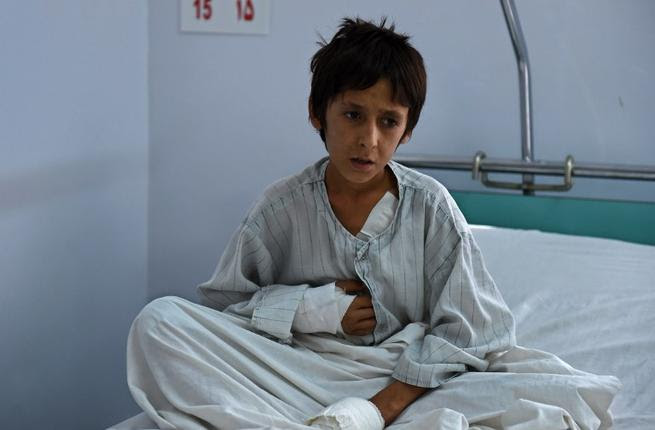 Above photo: A wounded Afghan boy, survivor of the US airstrikes on the MSF Hospital in Kunduz, sits on his bed at the Italian aid organization, Emergency’s hospital in Kabul on October 6, 2015. (AFP/Wakil Kohsar)

Note: Shortly after the bombing Edward Snowden tweeted that an important investigatory tool were the cockpit audio and video tapes.

AC-130 warplanes record the gunner’s video and audio. It’s time to release the tapes to an #IndependentInvestigation. pic.twitter.com/jtFyVCJ7Uw

The cockpit tapes came up in closed door Capitol Hill hearings on the Kunduz bombing. Some in Congress asked to see and hear the cockpit tapes but the DoD refused. Here is how the Daily Beast reported the moment:

“Questions about the recordings of the attack came up this week in classified briefings on Capitol Hill, but the military did not make either the audio or video available to congressmen and senators who oversee the Pentagon. And even when a lawmaker directly requested to listen to the audio, a senior congressional aide told The Daily Beast, they were rebuffed by the Department of Defense, which cited its continuing investigation as a reason not to share it.”

The refusal to provide Congress raises questions about whether DoD realizes that the civilian branches of government are in charge. Do they think they are above the law? Do not have to answer to Congress? And, it raises the question of whether the cockpit tapes provide a smoking gun as to the intention of the US military when it bombed the MSF hospital in Kunduz.

Sign our petition calling for President Obama to release the cockpit tapes:

Wanted dead, alive and on camera.

WikiLeaks is crowd-sourcing funds to pay a $50,000 bounty for video and audio of the U.S. airstrike on the Doctors Without Borders hospital in Kunduz, Afghanistan.“We are raising a U.S. $50,000 bounty to obtain the footage, the cockpit audio, the inquiry report and other relevant materials such as the Rules of Engagement active at the time,” WikiLeaks said in a statement.The United States carried out an airstrike on the hospital on Saturday, killing at least 22 people.Gen. John Campbell, the top U.S. commander in Afghanistan, said the airstrike was a mistake and that the U.S. military “would never intentionally target a protected medical facility.”Staff for Doctors Without Borders, known officially as Médecins Sans Frontières, left the bombed hospital on Sunday. At least 10 patients and 12 MSF staff died in the airstrike conducted by an AC-130 gunship.“MSF believes that the killings amount to a war crime,” WikiLeaks said in a statement. “The AC-130 records its attacks with high-resolution gun cameras. According to military procedure, this footage should have been retained along with the cockpit audio. A post-massacre inquiry report referred to as an ‘AR 15-6’ should have also been commissioned.”U.S. President Barack Obama on Wednesday apologized for the devastating strike. MSF has called for the International Humanitarian Fact-Finding Commission, created under the Geneva Conventions, to investigate.“It is unacceptable that the bombing of a hospital and the killing of staff and patients can be dismissed as collateral damage or brushed aside as a mistake,” MSF International President Dr. Joanne Liu said at a press conference in Geneva. “This was not just an attack on our hospital. It was an attack on the Geneva Conventions. This cannot be tolerated.”The bounty is part of the continuing “competition system” by WikiLeaks, called Prize for Understanding Good Government, or PUGG, to offer financial rewards for documents, allowing the “public to pledge prizes towards each of the world’s most wanted leaks.”WikiLeaks, founded by Julian Assange, previously offered a $100,000 bounty for the remaining chapters of the secretive Trans-Pacific Partnership agreement.MSF recently released footage of the Kunduz hospital before and after the bombing.