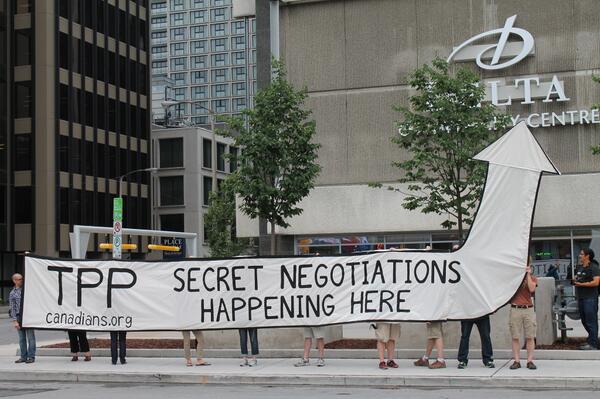 Today, Thursday 16 October 2014, WikiLeaks released a second updated version of the Trans-Pacific Partnership (TPP) Intellectual Property Rights Chapter. The TPP is the world’s largest economic trade agreement that will, if it comes into force, encompass more than 40 per cent of the world’s GDP. The IP Chapter covers topics from pharmaceuticals, patent registrations and copyright issues to digital rights. Experts say it will affect freedom of information, civil liberties and access to medicines globally. The WikiLeaks release comes ahead of a Chief Negotiators’ meeting in Canberra on 19 October 2014, which is followed by what is meant to be a decisive Ministerial meeting in Sydney on 25–27 October.

Despite the wide-ranging effects on the global population, the TPP is currently being negotiated in total secrecy by 12 countries. Few people, even within the negotiating countries’ governments, have access to the full text of the draft agreement and the public, who it will affect most, none at all. Large corporations, however, are able to see portions of the text, generating a powerful lobby to effect changes on behalf of these groups and bringing developing country members reduced force, while the public at large gets no say. Julian Assange, WikiLeaks’ Editor-in-Chief, said:

The selective secrecy surrounding the TPP negotiations, which has let in a few cashed-up megacorps but excluded everyone else, reveals a telling fear of public scrutiny. By publishing this text we allow the public to engage in issues that will have such a fundamental impact on their lives.

The 77-page, 30,000-word document is a working document from the negotiations in Ho Chi Minh City, Vietnam, dated 16 May 2014, and includes negotiator’s notes and all country positions from that period in bracketed text. Although there have been a couple of additional rounds of talks since this text, little has changed in them and it is clear that the negotiations are stalling and that the issues raised in this document will be very much on the table in Australia this month.

The last time the public got access to the TPP IP Chapter draft text was in November 2013 when WikiLeaks published the 30 August 2013 bracketed text. Since that point, some controversial and damaging areas have had little change; issues surrounding digital rights have moved little. However, there are significant industry-favouring additions within the areas of pharmaceuticals and patents. These additions are likely to affect access to important medicines such as cancer drugs and will also weaken the requirements needed to patent genes in plants, which will impact small farmers and boost the dominance of large agricultural corporations like Monsanto.

Nevertheless, some areas that were highlighted after WikiLeaks’ last IP Chapter release have seen alterations that reflect the controversy; surgical method patents have been removed from the text. Doctors’ groups said this was vitally important for allowing doctors to engage in medical procedures without fear of a lawsuit for providing the best care for their patients. Opposition is increasing to remove the provision proposed by the US and Japan that would require granting of patents for new drugs that are slightly altered from a previous patented one (evergreening), a technique by the pharmaceutical industry to prolong market monopoly.

The new WikiLeaks release of the May 2014 TPP IP text also has previously unseen addendums, including a new proposal for different treatment for developing countries, with varying transition periods for the text to take force. Whilst this can be viewed as an attempt to ease the onus of this harsh treaty on these countries, our diplomatic sources say it is a stalling tactic. The negative proposals within the agreement would still have to come into force in those countries, while the governments that brought them in would have changed.

Despite the United States wanting to push to a resolution within the TPP last year, this bracketed text shows there is still huge opposition and disagreement throughout the text. At this critical moment the negotiations have now stalled, and developing countries are giving greater resistance. Despite the huge lobbying efforts, and many favourable proposals for big pharmaceutical companies, they are not getting entirely what they wish for either. Julian Assange said:

The lack of movement within the TPP IP Chapter shows that this only stands to harm people, and no one is satisfied. This clearly demonstrates that such an all-encompassing and divisive trade agreement is too damaging to be brought into force. The TPP should stop now.