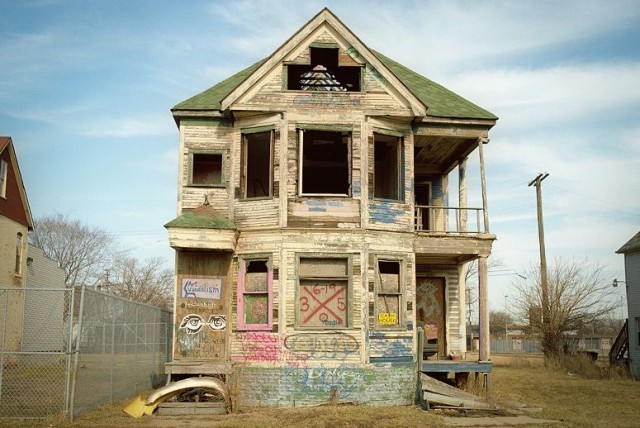 Will Detroit Use Funds To Restore Water or Tear Down Homes?

Above photo: For decades, Detroit has struggled against the blight of abandoned and decaying homes. (Photo: Peter Baker/Getty Images)

There are two ways to fight blight: Keep people in homes or demolish them. One embattled city will choose a path in September.

“I try not to let it affect me emotionally, but there are some days where it’s heartbreaking to listen to elderly people crying on the phone, begging for water,” said Harris, cofounder of the community group We the People of Detroit.

In Detroit, water and sewer bills have doubled in the last decade for thousands of customers living in poverty, according to the advocacy coalition People’s Water Board. Rates continue to rise. In May, the city resumed its practice of shutting off the water of delinquent customers, and as of July 1, nearly 4,000 households were eligible for disconnection, according to Bryan Peckinpaugh, spokesman for the Detroit Water and Sewerage Department.

“I give callers a list of shelters, but many of the shelters are full here,” Harris told TakePart.

From Baltimore to St. Louis to Charlotte, North Carolina, activists say water shutoffs targeting delinquent customers result in an additional problem: displacement, which can sometimes mean homelessness. For people who remain in their homes, living without running water is a health and sanitation crisis. “You need water to bathe, cook, flush the toilet,” Harris said. “The health consequences are dire.” A United Nations investigation into Detroit’s water disconnections, which condemned the policy as a human rights violation, described teenage girls “washing themselves with a single bottle of water during menstruation.” The U.N. investigators concluded that water shutoffs create homelessness.

Activists across the country are calling for an end to the practice. They scored a symbolic win in May, when Democratic members of U.S. House of Representatives introduced legislation that would force federal regulators to study the deep consequences of shutoffs for the first time, but it is unlikely to pass this year.

Water activists are hoping for a more tangible win this summer. Lawyers from the ACLU of Michigan and the NAACP Legal Defense and Educational Fund are suing Wayne County, of which Detroit is the county seat, to stop the seizure and auction of homes whose residents are behind on tax and water bills. The auctions are scheduled for September.

“Entire families will be displaced if we are not successful,” said Michael Steinberg, legal director of the ACLU of Michigan.

David Sole, a retired DWSD worker, said he has seen more than 10 properties vacated on his eastside neighborhood block since the recession began in 2007.

“A lot of people who lose their water end up leaving their homes. Sometimes neighbors try to bring in water, but how long can you sustain that? Living in a house without water is very difficult and dangerous. If they shut your water off, the next person to visit your home is Child Protective Services,” Sole said.

After two decades as a chemist dedicated to city water quality, Sole is now a community organizer with the Moratorium NOW! Coalition, which advocates for an end to water shutoffs. Sole and other activists argue that water shutoffs and housing policies are two levers with the power to spit out the same result: displacement.

City officials say shutoffs are necessary to prevent paying accounts from subsidizing unpaid accounts, that water revenue is vital to maintaining infrastructure, and that shutoffs are an effective policy tool.

“Once residents are disconnected, 85 percent of those customers come to a Detroit Water and Sewerage Department customer care center within 24 hours to make a payment or enter a plan,” DWSD Director Gary Brown told the Detroit City Council in a presentation in May.

“In terms of how residents are disconnected, it’s an algorithm in the computer system based on the past-due amount and the number of weeks past due. There’s no human factor, no picking who to shut off. We don’t want our customers’ service disconnected,” he said.

Water bills are a key issue in the lawsuit filed by ACLU and NAACP lawyers. Spirlin Moore, one of the plaintiffs, moved from Alabama to Detroit in the 1960s, and after years as a renter, he bought his house nine years ago, according to court documents. Now 77, deaf, and reliant on a caretaker, Moore is in danger of losing his home, according to a statement.

Water bills are a strain on Moore. Unable to pay his water bills three years in a row, he saw his water debt added to his tax bill. For 2013 alone, water added $770 to his taxes.

“This has been a problem for me for many years now,” Moore said. “It’s time for the city and the county to get it right.”

Ryan Bridges, the spokesman for Wayne County, said he could not comment on the suit because it is pending. Peckinpaugh added that under a city policy change, Detroit did not add water bills to tax rolls last year and does not plan to do so this year, although it is authorized to do so under state law.

Detroit water activists are watching the auction lawsuit as a sort of referendum on underlying questions: How will the city work to stabilize distressed neighborhoods, and how will the state spend federal money to that end?

Michigan received $188 million in funding from the federal Hardest Hit Fund in June. The Moratorium NOW! Coalition wants the state to use that to pay down water and tax bills, ending water shutoffs entirely. In the past, the state has devoted a large portion of federal relief to demolishing abandoned homes.

“Just demolishing homes is a Band-Aid approach to getting rid of blight. We want to keep people in their homes. Focusing on demolitions puts the cart before the horse,” said Brian White, chief of staff to Detroit City Council Member Mary Sheffield. “We want to stop what leads to most of the blight in the first place.”

Sheffield introduced a resolution in June pressuring the state to reprogram Hardest Hit funds toward foreclosure prevention, and it passed, but the effect is nonbinding.

“There are misplaced priorities,” he said. “Money is spent to tear down homes instead of spending more Hardest Hit funds to keep people in their homes. It’s creating a human catastrophe.”

Sara Jerome is a freelance reporter who covers policy. She previously held staff positions at National Journal, The Hill, and the Financial Times Group.