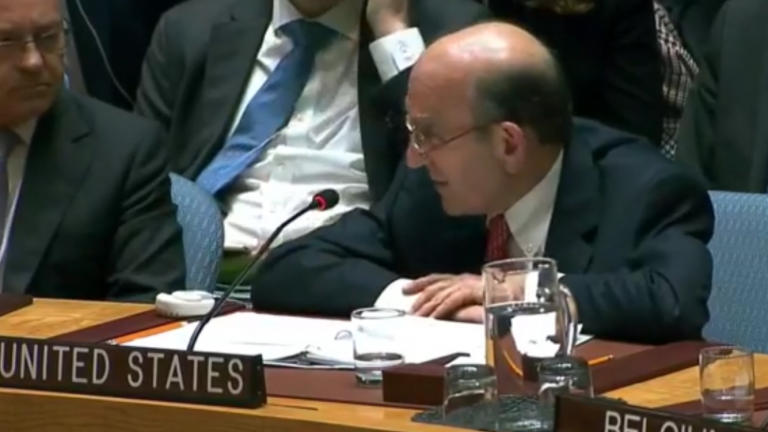 Will Elliott Abrams, “Abettor of Genocide,” Do To Venezuela What He Did To Guatemala?

On Friday afternoon, Secretary of State Mike Pompeo named Elliott Abrams to “lead our efforts on Venezuela” as that country is threatened by civil war. On Saturday, after making remarks to the UN Security Council about Venezuela, Pompeo vacated his chair and Elliott Abrams took over as representing the U.S. government, sparring with the Russian representative and others. (Partial text; full video).

Among the highlights of Abrams’ career: He was found guilty in the Iran-Contra scandal, and then got what prosecutor Lawrence Walsh called a “cover-up” pardon from George H.W. Bush. The pardon was approved by Bush’s attorney general, William Barr (who is also Trump’s current nominee for attorney general).

Abrams was a leading U.S. backer of right-wing forces during the 1980s in Guatemala, El Salvador and Nicaragua, resulting in tens of thousands killed in 1982 in Guatemala alone. See from the Guardian last year: “Guatemala: ex-military officers convicted of crimes against humanity.”

Abrams was George W. Bush’s point man in the 2007 U.S.-backed coup by Israeli-allied pro-Mahmoud Abbas militias against the elected Palestinian Hamas-led authority, leading to the division of West Bank and Gaza. See from Vanity Fair: “The Gaza Bombshell.”

On an appearance with Elliott Abrams in 1995 on the program “Charlie Rose,” Allan Nairn accused Abrams of crimes against humanity — see video posted on Twitter on Friday which has been viewed over 400,000 times; now on YouTube with transcript. Also see interview with Nairn on the program “Intercepted” with Jeremy Scahill.

Nairn recently tweeted: “Elliott Abrams does indeed represent longstanding U.S. policy. The problem is that that policy is to be willing to abet genocide, as the U.S. did in Guatemala (under Abrams), as a Guatemalan court ruled last September after hearing evidence in a genocide trial in which I testified.”

“Last September 26 a Guatemalan court ruled that the U.S. policy pushed by officials like Elliott Abrams was behind the rapes, tortures, & mass murders of indigenous people, which they formally determined to constitute ‘genocide.’”

“Elliott Abrams, who dismissed as ‘ludicrous’ the idea that even he should be subject to trial for abetting massacres, may now be in position to do for Venezuela what he did for Guatemala.”

“If Trump really wanted to stop the Guatemalan and Honduran refugees, he’d stop propping up the thieving, repressive presidents (@jimmymoralesgt [Guatemala], @JuanOrlandoH [Honduras]) who are compelling them to flee in the first place. #TrumpAddress #TheWall”

“The U.S. doesn’t care about elections or the poor. In ’02 they tried a coup v the cleanly-reelected Chavez even as his govt was improving health, nutrition, living standards. But now, as Maduro runs the country into the ground, the U.S. is salivating at the chance to resume pulling the strings.”