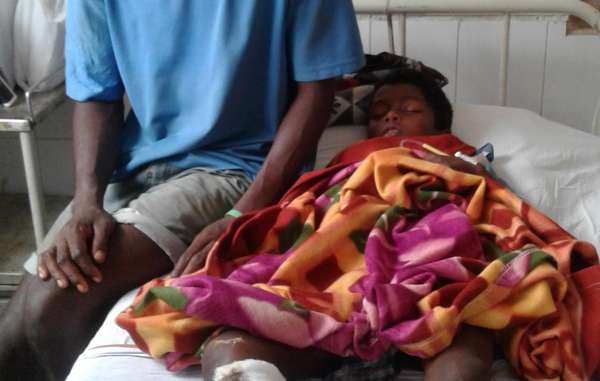 Above Photo: Akash Oram, a tribal boy, was shot by a park guard in Kaziranga National Park, Assam, India

Survival International has urged the International Union for Conservation of Nature and Natural Resources (IUCN) to address the spread of brutal shoot on sight conservation tactics at its world congress, which started yesterday in Honolulu, Hawaii.

Survival has asked the IUCN’s Director Inger Andersen to table the motion: “We condemn extrajudicial killing and “shoot on sight” policies in the name of conservation.”

“Shoot on sight” conservation is spreading rapidly, and has been devastating for tribal peoples:

– In June 2016, in Kaziranga National Park in India, a seven-year-old tribal boy was shot and seriously injured by a park guard. 62 people have been executed there without trial in nine years. Tribal people face eviction to make way for the park’s expansion.

An Indian activist, said: “These people should be the caretakers of the national parks, but the government policy has pauperized and alienated them. They have no livelihood and are living in a perpetual jail.”

– In Botswana, nine Bushmen were recently shot at by police from a helicopter for hunting antelope for food. They were then arrested, stripped naked and beaten. The country enforces a hunting ban which makes it hard for them to live, while big game trophy hunters are encouraged.

This is despite a 2006 court ruling which recognized the Bushmen’s right to live and hunt on their ancestral land.

The country’s Wildlife Minister recently said: “Poachers should start carrying their IDs so that we can notify their next of kin. Yes, God will judge the poachers but it’s up to us to arrange the meeting.”

The spread of “shoot on sight” tactics is just one sign of how conservation is becoming militarized and increasingly brutal. The big conservation organizations are guilty of supporting this. They never speak out about evictions, arrests or shootings carried out in the name of conservation.

But there are signs of growing public concern. The UN Special Rapporteur on Indigenous Peoples recently published a report into the impact of conservation on indigenous peoples. And a slew of recent press reports have exposed the devastating impacts of conservation projects on tribal peoples worldwide.

Survival’s Director Stephen Corry said: “Conservation would have better luck if it actually brought local communities on side instead of merely paying lip service to policies on indigenous peoples. Conservation initiatives should tackle the true poachers – criminals conspiring with corrupt officials. Instead, tribal people are being shot on sight while big conservation organizations stand by and watch. This is a humanitarian crisis and it’s scandalous that Survival is struggling to get them to condemn this scandal.”