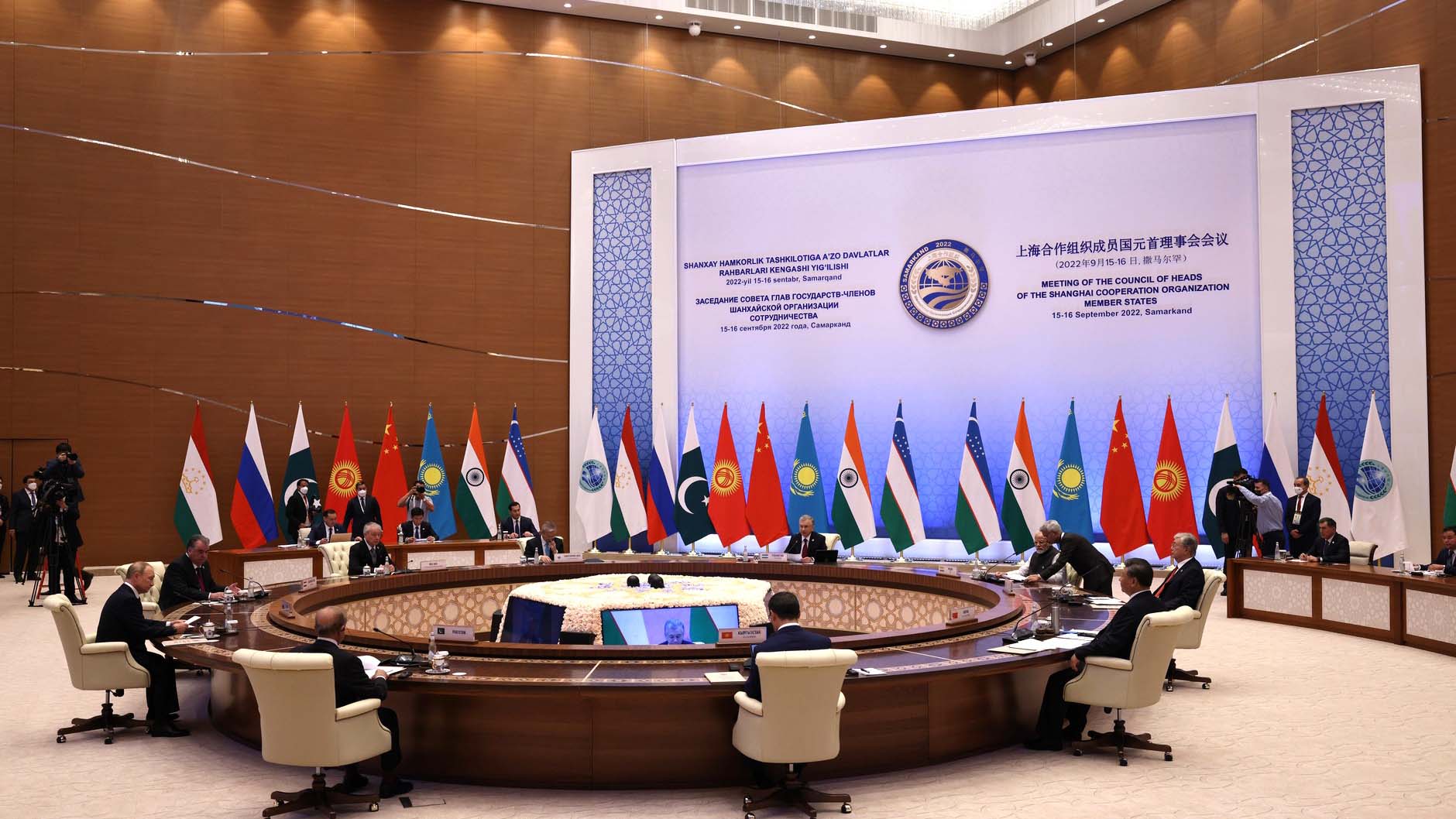 Will The Samarkand Spirit Revive The Word ‘Mutual’ In World Affairs?

Above Photo: The SCO states contribute 24 percent to the world’s gross domestic product and accounted for 17.5 percent of world trade in 2020, a volume of activity that is enticing for poorer states in Eurasia. Sergei Bobylev, TASS.

The keyword in the Samarkand Declaration seemed to be “mutual”: mutual respect, mutual trust, mutual consultation, and mutual benefit.

It harks back to the Bandung Spirit with an emphasis on sovereignty and equality.

In mid-September 2022, the nine-member Shanghai Cooperation Organization (SCO) met in Samarkand, Uzbekistan, for its 22nd Meeting of the Council of Heads of State. Because China, India, and Pakistan are members of the SCO, the organization represents about 40% of the world’s population; with the addition of Russia, the SCO countries make up 60% of the Eurasian territory (the other member states of the organization are Kazakhstan, Kyrgyzstan, Tajikistan, Uzbekistan, and now Iran). In its Samarkand Declaration, the final declaration of this meeting, the SCO represented itself as a “regional” organization, although the sheer scale of the SCO would allow it to claim to be a global organization with as much legitimacy as the G-7 (whose seven countries comprise only 10% of the world’s population, although the group accounts for 50% of the global net wealth).

The keyword in the Samarkand Declaration seemed to be “mutual”: mutual respect, mutual trust, mutual consultation, and mutual benefit. There is an echo in these words of the final communiqué of the Asian-African Conference held in Bandung, Indonesia, in 1955, which led to the formation of the Non-Aligned Movement in 1961. The Samarkand Spirit mirrors, for a different period, the Bandung Spirit with an emphasis on sovereignty and equality. Words like “mutual” are appealing only if they provide tangible benefits for the people who live in these countries.

As if on cue, eyes rolled in the Western press, which either did not give much weight to the meeting in their media coverage or emphasized the divisions between the countries that attended the meeting. Remarks by China’s President Xi Jinping and India’s Prime Minister Narendra Modi about their views on the Russian war in Ukraine shaped the headlines of the Western media. Certainly, the countries that attended the Samarkand meeting do not see eye to eye on each of the issues discussed, but they have built trust with each other and are interested in increasing their diplomatic and economic ties, particularly related to trade.

The SCO states contribute 24% to the world’s gross domestic product and accounted for 17.5% of world trade in 2020, a volume of activity that is enticing for poorer states in Eurasia. The locomotive of this economic activity continues to be China, which is the largest trading partner of Iran, Kyrgyzstan, Pakistan, Russia, India, and Uzbekistan. The advantages of trade among the countries—including energy purchases from Russia—anchor the SCO, which has become one of the key institutions for the integration of Eurasia.

Iran became a full-fledged member of the SCO at the Samarkand meeting. Over the course of the past decade, US sanctions on Iran and Russia as well as the US-driven trade war against China have drawn these three countries closer together. In April 2021, China and Iran signed a 25-year agreement on trade, which Iran’s ambassador to China Mohammad Keshavarz-Zadeh said “is not against any third country,” meaning the United States. Similar sentiments, but with a stronger anti-Western tone, could be heard at the seventh Eastern Economic Forum held in Vladivostok, Russia, in September 2022, where Russia’s President Vladimir Putin said, “the West is failing, the future is in Asia.”

The SCO is not merely the consolidation of Asian countries heavily sanctioned by the United States and the European Union. India, an SCO member, is a non-sanctioned state, and Türkiye, another non-sanctioned country, is seeking to join the SCO, belying such an easy dismissal about the reason for the existence of the organization. India is a full-fledged member of the SCO and has taken over the [presidency](https://newsonair.gov.in/Main-News-Details.aspx?id=447838#:~:text=The rotational presidency of the,will host the SCO summit.) of the organization till it hosts the next meeting in 2023. India’s Modi played an active role at the Samarkand meeting, and, according to an op-ed written by India’s former Foreign Secretary Kanwal Sibal, he suggested that India’s membership to the SCO is part of “our commitment to a multipolar world.”

Türkiye, a member of the North Atlantic Treaty Organization (NATO), is a dialogue partner of the SCO and is now seeking to upgrade its status to become a member of the organization. In 1987, Türkiye applied to join the European Union and “was declared eligible to join the EU” in 1999. Told that the process is necessarily slow, Türkiye’s senior officials watched with dismay as Ukraine applied to join the European Union in February 2022 and then was accepted as an EU candidate in June, jumping far ahead of Türkiye, whose candidacy has not moved forward and the accession negotiations have “effectively frozen.” The Samarkand meeting was the first SCO meeting that was attended by Türkiye’s President Recep Tayyip Erdoğan, who spoke about the SCO region being the “ancestral homeland” of the Turkish people and a natural fit for his country. India’s leadership in the SCO and the possibility of Türkiye’s entry into the organization show that the SCO is increasingly becoming an instrument for Eurasian integration.

“The situation in the world is dangerously degrading,” noted the Samarkand Declaration. “[E]xisting local conflicts and crises are intensifying, and new ones are emerging.” As the SCO met, Azerbaijan attacked Armenia—replaying the conflict of 2020—opening further tension between Russia (which is in the Collective Security Treaty Organization with Armenia) and Türkiye (which is a close ally of Azerbaijan). Adding to the confusion, clashes broke out at the border between Tajikistan and Kyrgyzstan, with Putin hastily calling the presidents of both countries to settle their differences. Modi and Xi met at the Samarkand meeting for the first time since the May 2020 clash between Chinese and Indian troops in the high mountain region of Ladakh. No real progress has been made on the decades-long border dispute between these two large Asian powers. Such existing local conflicts not only threaten the security of the people who live in those countries but also pose a challenge to the SCO becoming more than a regional organization.