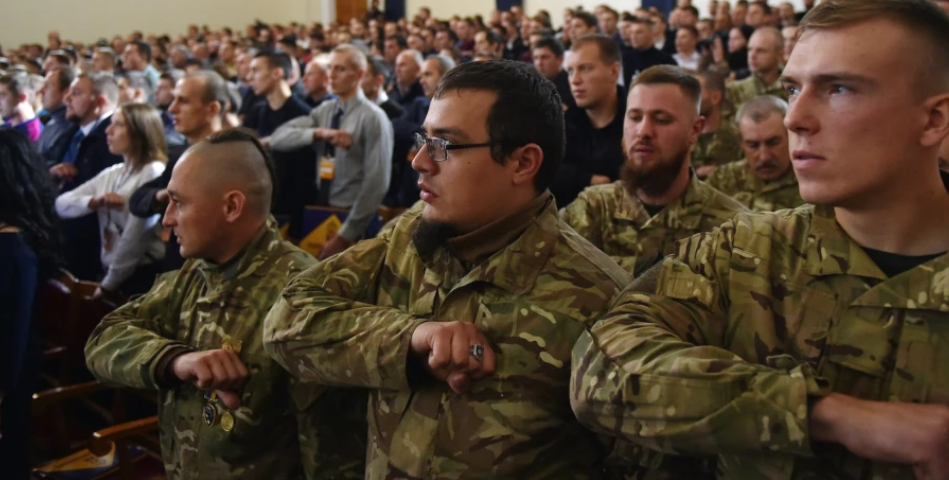 Will Ukraine Become A Hub For Accentuating Rising Neo-Nazism?

Above photo: Delegates sing the Ukrainian national anthem during the first congress of the new political party National Corps, created from the members of Azov civil corps and veterans of Azov regiment in Kiev on October 14, 2016. Genya Savilov/AFP/Getty Images.

In January 2021 the UN Secretary General made an important statement on the rising neo-Nazi trends in world. This was a timely warning which should have received more attention than it actually did.

The UN Secretary General Antonio Guterres said, “In Europe, the US and elsewhere, white supremacists are organizing and recruiting across borders, flaunting the symbols and tropes of the Nazis and their murderous ambitions.”

He went on to make a make an even more significant observation, “Tragically, after decades in the shadows, neo-Nazis and their ideas are gaining currency.”

Guterres quoted warnings of US authorities to the effect that neo-Nazis are on the rise across  the country and around the world. In some countries, he added, neo-Nazis have infiltrated police and state security services and their ideas can be heard in debates of mainstream political parties.

In terms of policy response the UN Secretary General said, “ We need coordinated global action, on the scale of the threat we face, to build an alliance against the growth and spread of neo-Nazism and white supremacy, and to fight propaganda and disinformation.”

It is apparent from this that there is recognition at the level of the UN and US official sources that neo-Nazi trends are increasing worldwide and more specifically in the USA and Europe. Secondly, that these forces have also succeeded in some countries to increase their impact (and capacity for harm) by infiltrating police and intelligence/security agencies. Thirdly, these neo-Nazi trends are now also seen in mainstream political debates. In addition these forces are establishing wider linkages cutting across national boundaries. Lastly, there is clear need for international cooperation for countering this increasing danger and its increasing capacity to infiltrate national security as well as cut across national boundaries.

In this context the most important recent development has been the increasing importance of Ukraine as a hub for neo-Nazi forces, a gathering point as well as a point to obtain weapons much more easily than in the past.

At the time of Hitler’s invasions most people from Ukraine resisted and fought the invaders but a few collaborated with the invader. Hence a minority of Nazi sympathizers known to be more hostile towards Russians has existed here for quite some time but not as an influential force. However in the course of the persistent interference of the USA and its allies in Ukraine to increase hostility towards Russia, these forces were found to be more helpful and therefore were strengthened by the USA and its allies. Hence their overall strength and nuisance value has increased steadily.

As has been seen in several countries, a force or group may have the support of just 5% or even less, but if it is aggressive, armed and has militias then its ability to browbeat and threaten others and to influence the course of events increases. In the case of neo-Nazis in Ukraine, this strength increased all the more because of the US support for this force, including for its military component. Hence this became the most important force for attacking Russian speaking people and regions within Ukraine and for obstructing any peace effort towards Russia and Russian speaking people which various Ukraine governments may have wanted to initiate. The ability of the neo-Nazis to threaten and impose their narrow agenda increased steadily particularly during the last 8 years of increasing US support.

As the Ukraine neo-Nazis improved their position in terms of influence, facilities, training, money and weapons, Ukraine increasingly appeared to be a preferred place for visits, meetings and gatherings of neo-Nazis of several countries. In recent months and weeks, money and weapons have been available in plenty for those neo-Nazis who are willing to fight Russians and Russian speaking people. With very destructive weapons reaching Ukraine by the truckloads, these can be easily obtained by neo-Nazis including those from other countries and can also be taken by them to their other areas of action.

Hence Ukraine can fast become a center, helped ironically by the USA and its allies which at official level speak so much against Nazism, which assists, motivates, strengthens and arms neo-Nazis from many countries, particularly from Europe and the USA. This aspect of the Ukraine crisis must be understood at a relatively early stage. Its impact can be very harmful for the USA and Europe.

Bharat Dogra is Honorary Convener, Campaign to Save Earth Now. His recent books include Planet in Peril and Man Over Machine (Gandhian Ideas for Our Times).