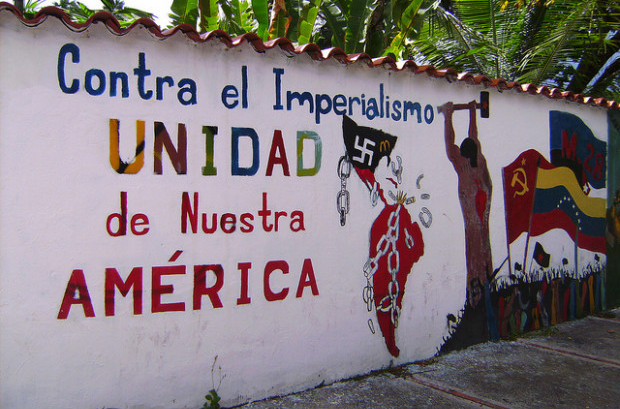 Will US Regime Change Operations In Venezuela Create A Civil War?

Note: Sadly, we fear that a civil war in unfolding in Venezuela.

This week, 8 million Venezuelans voted for a Constituent Assembly. This puts regime change further out of the reach of the oligarchs in Venezuela and the United States. Both have been trying to regain control of a country with vast oil reserves ever since Chavez was elected in 1999. It has been a constant ongoing coup using all the tactics of US regime change.

The immediate reaction of the United States were threats against this massive vote calling it a step toward dictatorship, and adding more sanctions, including on President Maduro. The US does not like how Venezuelans voted because it keeps them from profiting from and controlling Venezuelan oil.

Watch closely now because when the civil war heats up people in the US will be confused. Misinformation and war propaganda will rule. Maduro will be blamed for the civil war and for ‘killing his own people’ defending Venezuela from US imperialism and oligarch rule. He views, and many agree, that the vote for the Constituent Assembly was a vote for peace against the increasingly violent opposition protests.

We should do all we can to stop it, but the US is pretty determined, a lot of oil is at stake.  KZ

CIA Confirms The US Has Its Eyes On Venezuela’s Oil

Trump’s intervention in Venezuela represents another chapter in the long history of US interference in Latin America, writes SUSAN GREY

RECENT comments show the CIA is still working for regime change in Venezuela and encouraging the right-wing governments of Mexico and Colombia to do the same. In a Q&A session at the Aspen Institute think tank, CIA director Mike Pompeo said he was “hopeful that there can be transition in Venezuela” and that he had recently been in Mexico City and Bogota “talking about this very issue, trying to help them understand the things they might do so that they can get a better outcome for their part of the world and our part of the world.”

The remarks — which are strongly suggestive of collaboration between the CIA and the governments of Mexico and Colombia to remove the elected President of Venezuela — have been condemned by supporters of Venezuela both at home and abroad.

Venezuela’s President Nicolas Maduro, in a televised interview, denounced the comments and called for explanations from the Mexican and Colombian governments.

In a meeting with reporters in Washington, Venezuelan Foreign Minister Samuel Moncada accused the CIA of a secret operation “to split up a democratically elected government,” and Venezuelan charge d’affaires Carlos Ron said: “What this group is trying to do with Venezuela is basically divide the government, recognise other leaders and foment a conflict with the Venezuelans. This is absolutely unacceptable.”

Mark Weisbrot, co-director of the Centre for Economic and Policy Research in Washington and critic of US foreign policy in Latin America, said attempts to get rid of the Venezuelan government dated back 15 years.

US interference in Venezuela takes many forms, including not only political pressure, sanctions and propaganda, but also funding of right-wing opposition activity through organisations such as the National Endowment for Democracy. In 2016 alone more than $1.6 million (£1.2m) was channelled to opposition groups for dozens of projects thinly disguised as efforts to promote political awareness or participation. For example, over £26,900 was given for a project to “promote citizen engagement in the development of innovative alternatives to address Venezuela’s democratic challenges” and over £37,800 for training youth groups in “critical thinking, democratic principles, human rights, cyberactivism, and leadership skills.”

One of the first major actions supported by the US was the temporarily successful coup to unseat former president Hugo Chavez in 2002 by a combination of industrialists, businessmen, media owners and conservative military officers.

The coup was unsuccessful thanks to popular support for the government.

Since then opposition groups have persisted with undemocratic efforts to topple the elected government, including a management lock-out of the oil industry, aided and abetted by US-linked IT staff who sabotaged computer systems, and multiple incidents of street violence and attacks on government institutions and public services, which are still continuing today.

In the streets, masked protesters throw Molotov cocktails and set fire to barricades as they try to provoke the security forces into retaliation.

Maduro has repeatedly called for dialogue with opposition groups, but has been rebuffed.

When challenged about the CIA chief’s comments, the US State Department claimed to support democracy in Venezuela, but called for the cancellation of the elections for the Constituent Assembly — which over eight million people (41.5 per cent) participated in on Sunday despite right-wing opposition calls for boycotts and violent protests seeking to derail the elections — and threatened to intensify sanctions against Venezuelan citizens.

Ironically, the CIA revelations take place at a time when the White House is struggling to deal with suggestions that Trump’s campaign team colluded illegally with Russia to influence the result of the US elections.

These latest revelations confirm that the US is stepping up intervention and hostility against Venezuela aimed at regime change. With so much media misrepresentation taking place at the moment, one thing you should remember and what should be the context to every media story about Venezuela is that US President Donald Trump’s administration is seeking to complete the job George W Bush couldn’t and get US hands back on Venezuela’s massive oil reserves.

Progressives internationally should be clear that whatever problems Venezuela has, Trump, US intervention and neoliberalism are not the answer — the US should keep out of Latin America and national sovereignty must be respected.