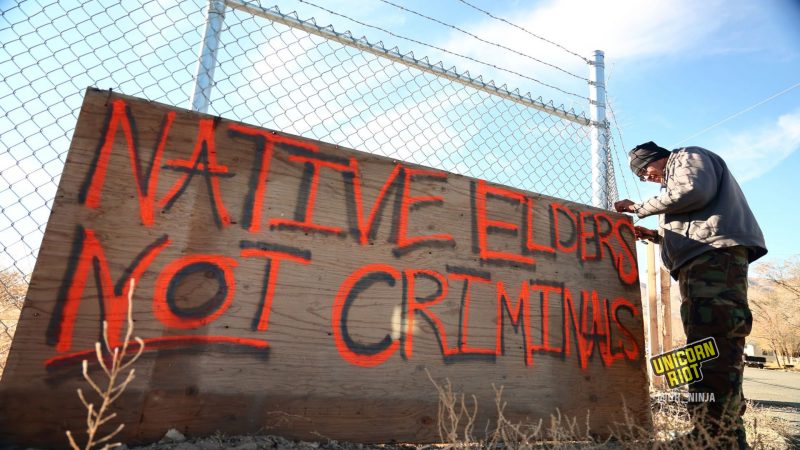 Winnemucca Indian Colony Defends Against Bulldozing Of Their Homes

Humboldt County, NV – In early November, Elisa Dick got an unexpected call at work. Her housemate told her to get home quickly—there were men with front end loaders preparing to level her home.

“When I got here, they were here with the machines and they told me I had 10 minutes to get all of my things,” Dick told Unicorn Riot, speaking from the leveled lot where her home stood just a few days earlier.

After packing what she could, Dick stood by and watched as contractors, escorted by armed men, flattened her home of 29 years.

Dick is one of about twenty residents of the Winnemucca Indian Colony in Humboldt County, Nevada. Generations of Paiute and Shoshone people have lived on the federally designated native land since it was first granted to displaced Indigenous people by executive order in 1917. The community, mostly comprised of elders now, call a 20-acre tract near the town of Winnemucca home.

The original allotment included two 160-acre parcels east of the current homesites. After a brush fire made the lots unlivable, residents established themselves on the 20-acre tract closer to town with access to utilities. There, residents built homes and worked to set up a tribal government to manage the 340 acres of land under their control.

But in 2020, a tribal council made up of people who do not live on the colony passed a motion and hired contractors to remove residents and their property, hoping to spur “economic development” on the colony.

As part of what the council called a “rehabilitation” effort, workers began clearing residents’ property in the spring of 2020. The work was stalled pending an ongoing court case that resulted in a temporary restraining order against the contractors, but when the order expired, crews returned in an attempt to remove the remaining homes. Dick was the first of at least 11 residents facing eviction, according to a construction plan circulated among colony residents last year.

But others were paying attention. Shortly after contractors returned in November, supporters arrived at the Winnemucca Indian Colony to prevent workers from removing more homes. After they successfully stopped work in an initial confrontation with contractors and hired security guards, supporters told Unicorn Riot they knew their work had just begun.

“It’s not just enough to just show up here and keep the bulldozers out and then leave,” Nennokaaski, a supporter, said. “No, we have to show what something different looks like, you know, what being in community looks like, what taking care of your elders looks like.”

To that end, supporters have established the native-led Newe’neen so’ka’pa Camp. By raising awareness through demonstrations and community events and meeting the material needs of colony residents, supporters hope to enable elders to create a long-term solution to the threat of eviction.

At the heart of the effort is protecting the elders and revitalizing their community, supporter Teewahnee Sahme told Unicorn Riot.

On the ground, allies help with chores, share meals, watch for construction equipment attempting to enter the colony, and support elders who are working to build self-governance. In the short term, supporters want to help stop evictions. Moving forward, they hope to support the Winnemucca Indian Colony residents’ bid for sovereignty.

“This is what needs to be done for these people, these elders,” Sahme said.

Colony residents, including Dick, have expressed gratitude for the support, and are hopeful that it will help community members remain in place while they work to secure their land.

“Being young, it’s not as bad,” Dick told a crowd of supporters gathered for a prayer walk organized by residents and supporters in November, speaking about losing her home days before. “But I pray for our elders. What are they going to do? It’s going to be that much harder of a battle for them.”

Since Newe’neen So’ka’pa Camp was established, law enforcement from local and federal agencies, including the Humboldt County Sheriff’s Office and the Bureau of Indian Affairs (BIA), have made at least two attempts to enter the colony.

On December 20, contractors arrived to continue work on the colony. In response, a supporter locked down to construction equipment, preventing the machine from operating.