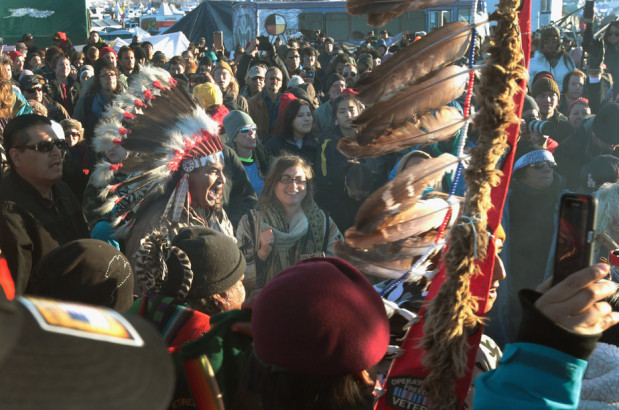 Wisconsin Tribe Votes To Evict Oil Pipeline From Its Reservation

Above Photo: The success of the Native Americans opposing the Dakota Access pipeline has inspired other tribes, including a band of Chippewa Indians in Wisconsin, to oppose other projects on tribal land. Credit: Getty Images

The Bad River Band of the Lake Superior Tribe of Chippewa Indians in northern Wisconsin voted not to renew an easement for a major oil and gas pipeline that passes through its reservation. In the wake of the successful protest against the Dakota Access pipeline in North Dakota, this decision is the latest example of Native American tribes using sovereignty rights to oppose fossil fuel projects.

The Bad River tribal council voted unanimously in early January to revoke rights-of-way that pass through the roughly 200-square-mile reservation and the decision could prove difficult to overturn. Pipeline companies often take ownership of private land through the use of eminent domain. But using Native American land typically requires tribal consent and easements are negotiated for a fixed period.

The pipeline in question, Line 5, spans 645 miles and is owned by Canadian pipeline giant Enbridge. It is used to ship as much as 540,000 barrels of fossil fuels, including crude oil and propane, per day from Superior, Wisc. to Sarnia, Ontario and is part of Canada’s largest export oil pipeline network. The resolution passed by the tribe calls for the decommissioning and removal of the pipeline from all Bad River lands and its watershed, which flows into Lake Superior.

Robert Blanchard, chairman of the Bad River band said the 64-year-old pipeline is “an accident waiting to happen.” A spill from the pipeline could affect land and water that the tribal members rely on for hunting, fishing, and gathering wild rice, Blanchard said.

“If something were to happen, no matter how big or how small, it’s going to have an effect on us,” Blanchard said. “We figure that now is the time to do something about it.”

Easements granted to the pipeline company on 11 parcels of land owned by the tribe expired in 2013. The company said it had been working with the tribe since then to negotiate a renewal and Enbridge spokesperson Michael Barnes said the company was surprised by the tribe’s decision.

“In addition to working toward a mutually beneficial agreement, Enbridge also worked with the band’s cultural resources, natural resources, and legal departmental staff to maintain safe pipeline operations within the boundaries of the Reservation,” Barnes said in an email.

Tribal officials said they have not been negotiating with the pipeline company about the easements and vowed to ensure that the pipeline does not remain. “We will reach out to federal, state and local officials to evaluate how to remove Line 5,” Blanchard said in a statement.

The vote by the tribe comes amidst increasing concerns by Native Americans and environmentalists in Michigan. They who worry that Line 5 could contaminate the Great Lakes if it were to leak at the Straits of Mackinac where Lake Michigan and Lake Huron meet. Reps. Dave Trott (R-Mich.) and Debbie Dingell (D-Mich.) introduced legislation on January 12 calling for a shutdown of the pipeline if a federal study finds it poses significant risk to the Great Lakes.

If the company and the tribe do not reach an agreement, the company may be forced to reroute the existing pipeline around the reservation or shut the pipeline down.

If the pipeline is rerouted, it wouldn’t be the first time that a Native American tribe succeeded in pushing a pipeline off its reservation. In 1995, the Confederated Salish and Kootenai Tribes of Montana fought and won a similar battle with Yellowstone Pipeline Co.

That pipeline leaked 10,000 gallons of gasoline in 1993, just as the 20-year permit to cross the Flathead Indian Reservation was up for renewal. When the tribes declined to renew the lease, the pipeline company had to use tanker cars to ship the fuel around the reservation, something it continues to do two decades later.

Similarly, the easement for a gasoline pipeline that passed through the town of Bellingham, Wash. had expired when the pipeline exploded in 1999, killing three people. As with tribal land, municipal land in Washington State cannot be taken through eminent domain.

“The Olympic Pipeline folks came to an agreement with the city that added in a whole lot more safety than what the federal government would have required, including different types of valves and different types of inspections,” said Carl Weimer, executive director of the Pipeline Safety Trust, a nonprofit watchdog organization based in Bellingham.

In 2015, the Department of the Interior strengthened tribal sovereignty rights with regulations stating that the federal government cannot overrule tribal decisions on the granting of rights-of-way.

Denying easement renewals, however, is unlikely to become a common form of opposition.

“I doubt that there are that many places where pipelines actually extend through a reservation,” William Rastetter an attorney representing the Grand Traverse Band of Ottawa and Chippewa Indians in Michigan said. “And even if they do, they may be subject to easements that have many years to go before they would have to be redone.”

The Grand Traverse band is challenging safety upgrades proposed for the Line 5 pipeline in Michigan, including a call for greater environmental scrutiny of the proposed work. Its legal objections are similar to arguments being used by the Standing Rock Sioux in North Dakota to halt Dakota Access.

“I think what has happened in Standing Rock has galvanized Indian country,” Rastetter said of the high-profile fight to stop the $3.8 billion pipeline.

Indigenous activists recently set up camps in west Texas to fight the Trans Pecos pipeline that would transport hydraulically fractured natural gas to Mexico. They have vowed to “follow the same model as Standing Rock.”

Honor the Earth, a Native American environmental organization that has been a leader in opposing Dakota Access is now looking to Enbridge’s Line 3, a proposed pipeline that would transport tar sands oil from Hardisty, Alberta to Superior, Wis., where it would connect with the existing Line 5.

Tribes are increasingly seeking, and obtaining, rights-of-way contracts that require disputes to be resolved in tribal court, said Sarah Krakoff, a Native American law professor at the University of Colorado Law School.

Enbridge officials would not specify what, if anything, the company had offered the Bad River tribe in financial compensation, enhanced safety measures or legal jurisdiction in any negotiations or offers.

The company’s spokesperson, however, suggested that they would continue to try to reach an agreement with the tribe.

“We are still very hopeful about negotiations,” Barnes said.