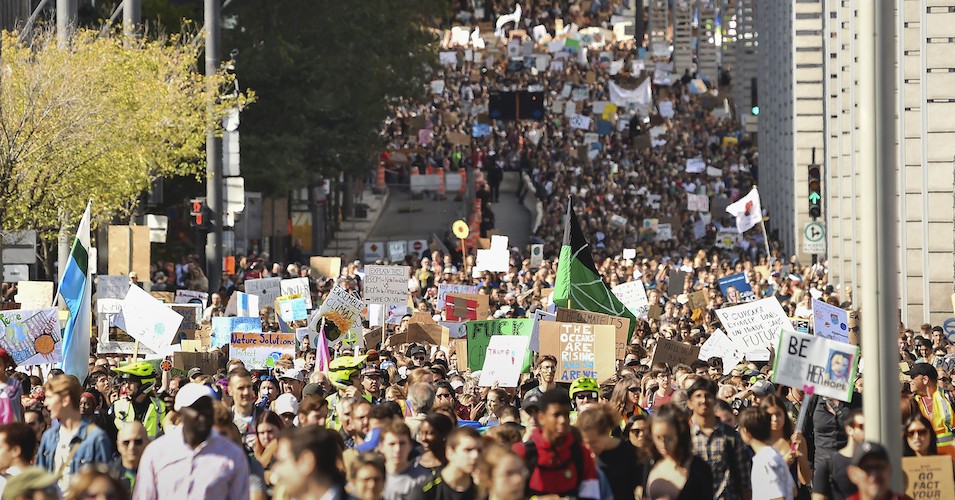 Above Photo: Young activists and their supporters rally for action on climate change on September 27, 2019 in Montreal, Canada. (Photo: Minas Panagiotakis/Getty Images)

“The momentum is on our side and we are not going anywhere.”

Climate strikes over the last seven days drew over 6.6 million people into the streets around the world, putting the week-long action on par with the 2003 global protest against the U.S.-lead invasion of Iraq.

Friday’s 600,000 strong demonstration in Montreal made the total number of people who took part in the seven days of action “almost certainly the largest demonstration our planet has yet seen about climate change,” said 350.org founder Bill McKibben.

In a statement, 350 gave the numbers:

“The week of Global Climate Strikes is on par with the 2003 anti-Iraq war protest as one of the largest coordinated global protests in history,” 350 said.

“We strike because we believe there is no Planet B and that we should do everything in our power to stop this crisis,” Fridays for Future Turkey organizer Atlas Sarrafoğlu said. “Otherwise my dreams of having a happy future will be taken away from me as well as all the other kids all over the world.”

Organizers of the global movement said that they were pleased with the turnout and that the movement wasn’t going anywhere.

“This week was a demonstration of the power of our movement,” said Fridays For Future International. “It was inspiring and historic. People power is more powerful than the people in power.”

“It was the biggest ever climate mobilization, and it’s only the beginning,” the group said. “The momentum is on our side and we are not going anywhere.”

350 executive director May Boeve said that the climate actions would continue until policies improve.

“We will keep fighting until the politicians stop ignoring the science, and the fossil fuel companies are held responsible for their crimes against our future, as they should have been decades ago,” said Boeve.