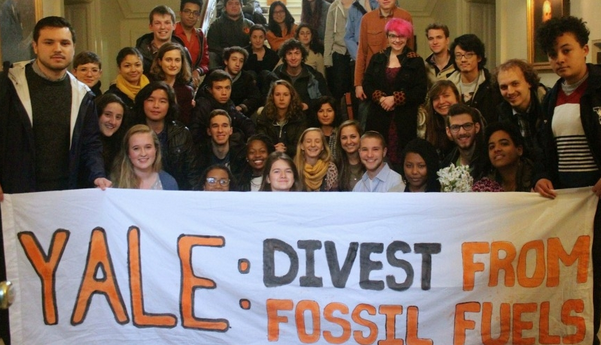 With campus sit-ins taking place in several states, and more direct actions planned for the days and weeks ahead, a new generation of climate activists is taking the reins in an escalating fight for fossil fuel divestment that’s sweeping the nation this spring.

As a group of environmental leaders wrote in an open letter published Thursday atCommon Dreams, “By taking strategic action this spring, students are posing a . . . crucial question to the public and their institutions’ leadership: whose side are you on?”

Close to 50 student members of Fossil Free Yale entered the university’s Woodbridge Hall on Thursday morning, vowing to stay until the administration publicly commits toreconsidering the case for divestment. Yale, which at $24 billion has the third-largest university endowment in the world, said in August that it wouldn’t sell its holdings of oil, gas, and coal stocks.

Fossil Free Yale communications director Chelsea Watson told the Yale Daily News that working through official administrative channels, such as meeting with the university’s Advisory Committee on Investor Responsibility, had been “completely ineffective,” making it necessary for the group to confront the administration directly.

A similar occupation has been taking place at Swarthmore College in Pennsylvania for three weeks, with 340 Swarthmore alumni pledging on Thursday not to donate to the school until the university’s Board of Managers agrees to divest from fossil fuels. Led bySwarthmore Mountain Justice, the student-organized divestment actions have garnered support from environmentalist and author Bill McKibben, of 350.org, as well as United Nations climate chief Christiana Figueres, herself a Swarthmore alum.

The students at the University of Mary Washington, in Virginia, have been holding their sit-in for almost as long—about two weeks. On Thursday, Divest UMW postedsupportive messages from alumni, including one identified as Lee S., who said: “Students at UMW are exhibiting true leadership during a time when most are content to accept the current fossil fuel paradigm we live under. Thank you for seizing the day, actualizing truth, and showing us what it means to care about one another.”

Meanwhile, more than a half-dozen University of California Berkeley students held an overnight action on campus from Wednesday into Thursday, aimed at encouragingChancellor Nicholas Dirks to “publicly stand with our campaign and support divestment from fossil fuels and a future that creates economic, racial, and climate justice!”

And at Harvard University, students, faculty, and alumni are gearing up for what they are calling ‘Harvard Heat Week‘—five days of divestment-focused trainings, discussions, rallies, and “mass civil disobedience” starting on Sunday.

As Kate Aronoff noted this week for In These Times, “The group hopes that the week of action, which has already gained the endorsement of noteworthy alums Natalie Portman and Cornel West, will compel the administration and the Corporation to the negotiating table.”

Aronoff continued: “Escalation is seen as a strategic response to pushback from university administrators, forcing them to choose between supporting their students and the fossil fuel industry.”

In their open letter, the climate leaders—including First Nations representatives and those who are at the frontlines of the climate crisis—articulated what their side is fighting for:

Our side knows that, in the words of Crystal Lameman of the Beaver Lake Cree Nation, “We can not eat money and we can not drink oil.” Our side sees a future built on not only surviving, but thriving. Our side fights for a future where amenities such as food, water, shelter, education, clean air and healthcare are considered basic rights, not luxury commodities. It is a future where work is valued regardless of its ability to generate profit for the 1 percent, and that recognizes the abundance of the earth and the people living on it. It is a future where Black lives matter, where First Nations’ treaty rights are honored, and where a person’s citizenship status does not determine their character. It is a future where workers have family-sustaining jobs building the vital infrastructure that will carry us through a just transition away from fossil fuel dependency.