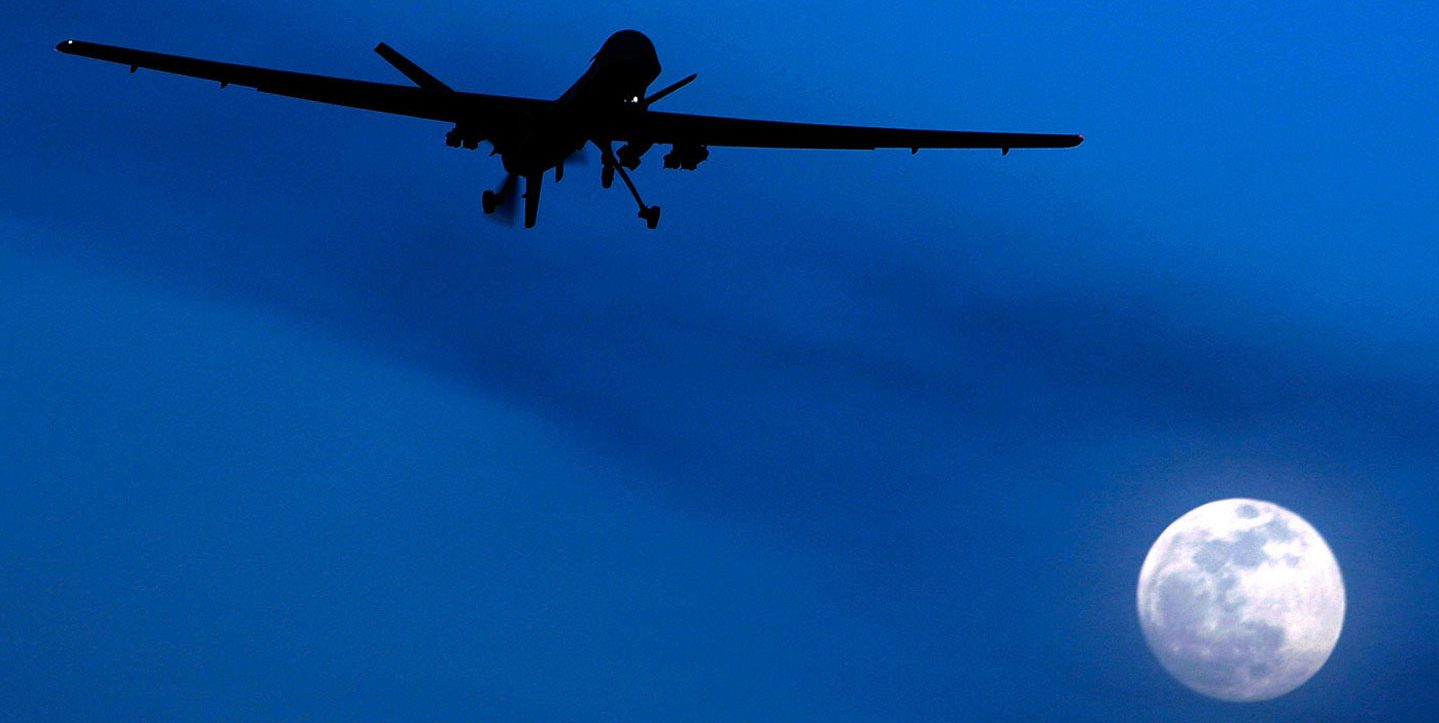 Withdrawing US Troops From Afghanistan Is Only A Start

Above photo: A US Predator drone flies over the moon above Kandahar Air Field in southern Afghanistan. Kirsty Wigglesworth / AP Photo.

We Have to End the Air War Too.

The war is a failure. Continuing to wage it will only result in further devastation.

In recent months talk of withdrawing troops from Afghanistan has increased once again. It’s not the first time during the course of the nearly two-decades-long war that we’ve heard this, and at several points since the war began in 2001, some troops have actually been withdrawn. But somehow, almost 20 years in, there still isn’t very much talk about what it will actually take to end US actions that kill civilians. We hear talk about the “forever wars,” of which Afghanistan is of course the longest, but not much about what their first perpetrator, President George W. Bush, named the “Global War on Terror” (GWOT)—and the effect that that’s had.

The shift in name and definition of war in Afghanistan (and related post-9/11 wars in so many countries) away from GWOT to “forever wars” reflects how the wars have been and continue to be fought. Bush’s war in Afghanistan, and many years of Obama’s war there, and beyond, were characterized by large troop deployments and the occupation of cities and huge swaths of Afghanistan and its people. Arrests of thousands of Afghans accused, often wrongly, of sympathy with the Taliban, pitched battles with the Taliban, and deadly US air strikes, all devastated the country and the people.

Obama began reducing ground troops only after years of escalating deployments on his watch, during which time the emphasis of the war also changed. It had morphed into an air war, a war of drone strikes, bombers, and more, along with the deployment of US Special Forces for targeted operations. US casualties dropped to near zero; by 2011, Afghan civilian casualties had significantly escalated. That war in Afghanistan continues, under the guise of “counterterrorism.” The “forever war” in Afghanistan, the one that involves US troops on the ground, mainly training and assisting Afghan troops, continues today, though with dramatically reduced deployments.

While he was in office, Donald Trump, for reasons seemingly unrelated to actual US strategy in Afghanistan, and definitely unrelated to any concern about the still-climbing numbers of Afghan civilian casualties, withdrew some troops and talked about pulling out more. That withdrawal process escalated in early 2020 after the signing of the US-Taliban peace deal, which called for a complete US withdrawal by May 2021 in return for the Taliban’s cutting of ties with Al Qaeda, ending attacks on US troops, and opening negotiations with the Afghan government.

When Trump actually began withdrawing troops in November 2020, despite that commitment’s being key to the US-Taliban agreement, supporters of the war, Republicans and Democrats alike, erupted in opposition. They raged that Trump’s decision would mean betraying the US service members who had died there, or ditching the corrupt and feckless Afghan government the United States had installed, or forsaking our “Afghan allies” in the military our troops continued to train, or abandoning Afghan women, or—maybe the most iconic warning—losing the war and allowing the Taliban to win. For some Democrats, the fact that it was Trump calling for withdrawal was all the evidence they needed that US troops should remain.

Among all of those Washington insiders outraged at the prospect of pulling troops out, few seemed willing to ask what the consequences would be if they stayed. Or, for that matter, what the consequences have been of the US troop presence in Afghanistan for almost two decades. For many people in the States, the war in Afghanistan had largely become invisible. US casualties had dropped to near zero, which meant that coverage of the war in the mainstream press had dramatically fallen off.

The impact of the December 2019 Afghanistan Papers, documents published by The Washington Post proving that “senior US officials failed to tell the truth about the war in Afghanistan throughout the 18-year campaign, making rosy pronouncements they knew to be false and hiding unmistakable evidence the war had become unwinnable,” was short-lived. At that point, there were about 13,000 US troops remaining in Afghanistan—20 were killed in combat that year, and that was actually the highest number of US casualties since Obama’s 2015 reduction of combat operations and their replacement with the train-and-assist mission that remains in place today. But the Pentagon’s separate “counterterror” war continued throughout the 44th president’s tenure and beyond, with little discussion back home. With annual American deaths in combat barely over single digits, press coverage disappeared, and it was much easier to keep up the deadly air war with few people paying attention. And so the number of Afghan civilians killed, whether in funeral processions, wedding parties, or trying to simply live their lives, has not led to debate about the legitimacy and human costs of the war.

There are answers, of course, to the claims asserted of why the war needed to continue.

Threat or no threat, US forces have continued killing civilians. McChrystal’s strategy was supposed to move away from just killing “bad guys” to also protecting civilians, which required more troops. His successors during the next few years oversaw Obama’s huge escalation of boots on the ground. That didn’t win the war either. By 2014, ground troop numbers were massively reduced, but the “counterterrorism” focus on air strikes and Special Forces remained.

That counterterrorism emphasis continues today, rarely discussed publicly except to mention, almost in passing, that no decision to withdraw ground troops will impact on continuing “counterterror” activities—in Afghanistan, Yemen or elsewhere. By 2019 the United Nations reported that the United States and its allies were responsible for more civilian deaths than the Taliban—and that “aerial operations were the third-highest cause of civilian casualties.… The [UN] report attributed almost all of those casualties to American air strikes.” The 2020 UN casualty report documents a slight decline in civilian deaths, with numbers dropping after the signing of the US-Taliban agreement but increasing again as the talks between the Taliban and the Afghan government began. US air strikes dropped precipitously, but those by the Afghan air force increased—with the United States still training pilots, delivering parts for the planes, and providing the bombs. So Washington still bears responsibility for the deaths of thousands of civilians every year.

The 2020 UN report also called on the United States and its allies to “increase transparency of investigations into civilian casualty incidents and communicate results to civilian victims and their relatives.”

Ironically, while continuing its air war against Taliban fighters, the United States has simultaneously partnered with the Taliban in its conflict with ISIS, or the Islamic State, which has a small number of fighters in Afghanistan. In the fall of 2020, as if to prove that there is no military solution to terrorism, only a permanent game of lethal whack-a-mole, Taliban and ISIS fighters were fighting for control of the Korengal Valley. According to The Washington Post, “US Special Operations forces were preparing to intervene in the fighting in Konar province in eastern Afghanistan—not by attacking both sides, but by using strikes from drones and other aircraft to help the Taliban.”

The public text of the US-Taliban agreement does not mention CIA personnel remaining in Afghanistan after the withdrawal of troops. But public reports make clear that while reducing the number of such agents and perhaps moving them to the US embassy in Kabul was discussed during the negotiations, there is no reason to think CIA agents won’t remain even when “all foreign forces” are withdrawn.

Pulling out the ground troops is important. They’re not keeping Afghans safer. They’re not building democracy. They’ve been there far too long, and we signed a peace deal promising to get them out.

But pulling out the ground troops is not enough. If we’re serious about ending the US role in the war, and we must be, we need to get serious about ending the war that’s still killing Afghans almost two decades after the United States invaded the country. Calling the air war “counterterrorism” isn’t a sufficient reason to continue military campaigns that kill civilians.

Ending the US military role will not in and of itself bring peace to Afghanistan, but it’s a necessary precondition to end the war. Malalai Joya, then the youngest member of the US-installed Afghan parliament and one of very few women, was driven out of parliament by threats and attacks, including from government supporters. “In the Taliban time,” she said, “we had one enemy: the Taliban. Now we have three: the Taliban, warlords [inside the US-installed government and parliament] and the occupation forces.… The US and NATO presence is making the struggle for justice and peace much harder because they empower these reactionary terrorists, who are great obstacles for true democratic-minded elements in my country.”

Phyllis Bennis is a Fellow of the Institute for Policy Studies. She is co-author with David Wildman of Ending the US War in Afghanistan.