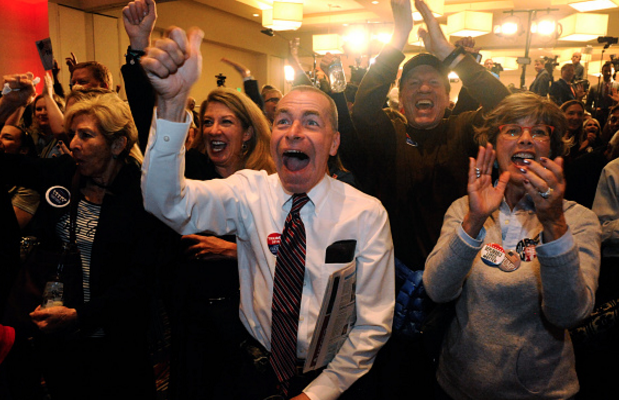 This was a highly emotional election, and we need time to feel our feelings and sort out what it means for us and for the country. Donald Trump is a con man; his game is to manipulate emotions and activists can be as vulnerable as anyone else. Knowing that, we can give ourselves some space to breathe rather than hype each other’s fear. We can also begin to ask, what does his victory mean for social activists on the left?

First, and most obviously, Bernie Sanders was not Trump’s opponent. Many Trump voters liked Sanders for the same reason they supported Trump: He was an outlier who was an alternative to the establishment that has for decades been implementing what billionaire Warren Buffett calls the economic elite’s “class war.”

We activists on the left, even with some disagreements with Sanders, could reasonably regard him as a standard-bearer for us, but that’s not the choice voters made this November. I voted for Hillary without believing for a minute that she was putting forth my politics — or that my politics even got attention in the general election.

What we learn from the vote against Hillary is that many people who are losing the class war don’t like losing, and took it out on a pillar of the establishment. In 2008 and 2012, many white working-class people in the North gave their support to Barack Obama because he was the most credible hope for change, running in each election against a pillar of the establishment. By wide margins they didn’t let the color of his skin prevent them from voting for the chance of a pause in the battering they’d been getting.

For people interested in learning how to make major change in the United States, the electoral arena is only a tiny peephole covered with gauze. Voter participation is low in the United States compared with, say, Scandinavia, and that was true this year, too. Because the election only involves part of the citizenry and is mostly about money, celebrity and manipulation, it tells us little and invites us to make up stories laced with our own fears.

Nevertheless, combing the electoral data can tell us something. Exit polls, for example, tell us that one in five voters who pulled the lever for Trump do not believe he is qualified to be president.

Why vote for someone so unqualified? One answer is because that voter feels certain they know what a second Clinton presidency would bring: unjust policies that further degrade the lives of the oppressed. Here’s the chance for activist empathy, crucial for our having any chance of success in the future: When people so desire change that they will vote for someone they believe unqualified, they are desperate. Activists are used to calling people who are rendered desperate by unjust polices “the oppressed.” If using that name helps us stop othering working-class Trump voters, let’s use that name.

The white working class reading of recent American history may be more accurate than that of many activists. Bill Clinton betrayed the Democratic Party’s traditional working-class base through the North American Free Trade Agreement, destruction of “welfare as we know it,” and subsidizing corporations’ moving industrial jobs overseas. Even when the presidency and both houses of Congress were in the hands of the Democrats, a union movement that worked night and day to get Democratic politicians elected could not get its priorities enacted.

Many in a social class that once believed the Democratic Party was its ally were bound to notice, sooner or later, that the party’s allegiance is elsewhere. I’ve often heard middle-class liberals complain about working-class people voting against their interests, but I’m not hearing them complain that tens of millions of middle-class people vote against their interests – something they do routinely, and did so again by voting for Trump. In fact, the middle class reportedly provided Trump’s most reliable funding during the primary season.

How the Democrats became losers

In 2008, Main Street rose in outrage against Wall Street’s irresponsibility, forcing a defeat in Congress of the first stimulus package. It was a fantastic opportunity for left-of-center organizing, and I looked in vain for signs from organized labor or other Democratic Party players that had the needed organizing capacity.

Later I asked a Washington insider friend who knows what goes on inside the party, “Did you hear of anyone in the Democratic Party even making the suggestion that this was an opportunity to win back the blue collar workers who feel frustrated by Democratic distance?”

He did not. We both knew the Republicans did jump right on the opportunity, gathering anti-Wall Street energy into the Tea Party movement. Years went by: widespread unemployment, replacement jobs at half the wages, people continuing to be thrown out of their homes. Not until 2011 did Occupy happen, and it proved largely uninterested in ongoing organizing, or carrying out campaigns that could engender hope.

Pollsters found years later among Tea Party-identified people a continuing strong anger against Wall Street. The Trump campaign used this effectively, linking (accurately) Hillary Clinton to top financiers. Despite Bernie Sanders’ rallying of significant white working-class support in the primary, Clinton failed to build on that momentum. How could she? Back in the 1990s she and her husband solidified Wall Street’s ownership of the Democratic Party, moving it to the right.

What this means for activists in the next two years

The alienated white working-class people who cast their protest vote for Trump remain without a home, since neither party intends to meet their needs. The Republicans will at least talk to them, inviting them to vent their frustration at scapegoats (“the Mexicans”). We can offer something better. It’s time for a crash program by activists to design hard-hitting direct action campaigns that cast our issues in terms that address their needs for economic security and self-respect.

Peace activists can do this; the Jobs with Peace Campaigns of the 1980s reached beyond the choir and involved working-class people through neighborhood associations and unions. School reformers can do this; campaigners already involve working-class parents and demand well-funded schools that are seven-day-a-week community centers building skills, solidarity and self-respect. Climate justice advocates need to make jobs central to their campaigns, as does Earth Quaker Action Team with its Power Local Green Jobs demand in Philadelphia, targeting a fossil fuel-dependent electrical utility.

At this point, activist campaigns aren’t massive enough to shift macro-economic decision-making. For one thing, we give away too much energy to the co-opting welcome of the Democrats. However, we can build the scale of our movements by frankly admitting that alienated white working-class people are right: Both major parties are together destroying the country on behalf of the 1 percent. It may be hard for college educated activists to admit that the cynical working-class view is more accurate than the belief of graduates of political science courses. However, the sooner the humility arrives, the better. With humility comes the chance to scale up our campaigning and take the next step in the living revolution.