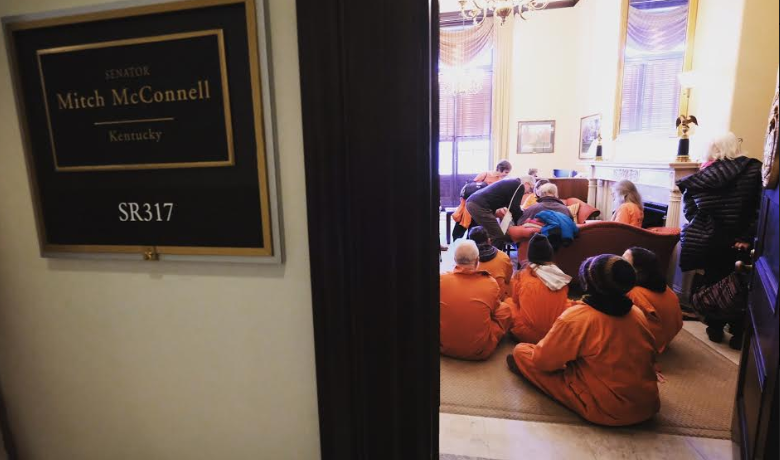 Four human rights activists were arrested today and charged with unlawfully demonstrating inside Senate office buildings after sitting-in at the office of Senate Majority Leader Mitch McConnell. They were among a group of about twenty-five Witness Against Torture activists who entered the office at 3:00 p.m. Many were clad in orange jumpsuits resembling those worn by prisoners in Guantanamo. They delivered a letter requesting McConnell’s assistance on two matters concerning human rights violations.

The letter asks him to “schedule a vote on the War Powers Act to end U.S. military involvement with Saudi Arabia and the United Arab Emirates in the terror attacks on the people of Yemen.” The letter also asks that he use his influence to close down the prison facilities at Guantanamo.

Two of McConnell’s aides listened to the activists’ concerns for an hour.

The four who were arrested had remained seated in a conference room inside the Senator’s office. They said they were prepared to wait in McConnell’s office until he is able to meet with them and confirm that he will take action on a vote on the War Powers Act regarding Yemen and initiate a process to close down the prison at Guantanamo.

he four arrestees were released around 8:45 PM after being charged with demonstrating inside the Russell Senate Office Building.  They are scheduled to appear in court in February.  Below is a copy of the letter the activists wrote to Majority Leader Senator Mitch McConnell. 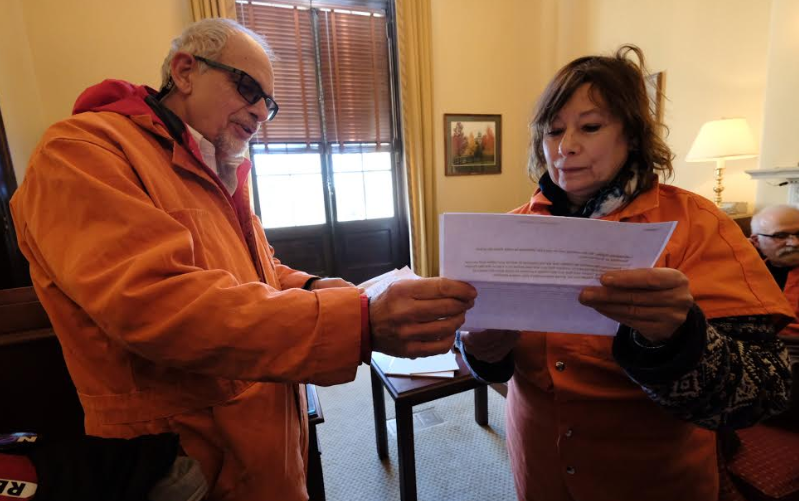 Witness Against Torture will carry on in its activities until torture is decisively ended, its victims are fully acknowledged, Guantánamo and similar facilities are closed, and those who ordered and committed torture are held to account.

We are members of Witness Against Torture <witnesstorture@gmail.com>, and we are seeking your assistance on two matters, both of which concern human rights violations.  We would like to meet with you as soon as possible to discuss these issues with you, the Senate Majority Leader.

First, we feel it is extremely important that you schedule a vote on the War Powers Act to end U.S. military involvement with Saudi Arabia and the United Arab Emirates in the terror attacks on the people of Yemen.  Immense human rights violations are being committed by these two countries with the assistance of the U.S. military and U.S. weapons contractors.  You are quite aware that the situation in Yemen worsens on a daily basis, and thus we feel it is urgent to seek a meeting with you. On August 9, 2018, for example, the Saudi-led coalition conducted an airstrike in Yemen that destroyed a school bus and killed some forty children – using armaments allegedly provided by the United States. This attack took place more than three years into a conflict that has resulted in thousands of civilian casualties and a situation where 22 million people require humanitarian assistance.  Besides the famine, Yemenis are dealing with a health crisis as diphtheria and cholera are at epidemic proportions.

Our second issue is the US detention center at Guantánamo Bay which has been open for over 17 years. Forty men remain imprisoned, five of whom are cleared for release. Witness Against Torture is working to raise awareness about their torture and indefinite detention. We’re also working to combat Islamophobia across the U.S. Playing to Islamophobic fears of Muslim peoples, Guantanamo was founded with the lie that it houses only “the worst of the worst” terrorists.  It continues to hold exclusively Muslim men, many of whom were severely tortured, without charge or trial.

Other detained men face prosecution in the legally-flawed Military Commissions.  The unworkable Commissions have failed to provide due process for the accused or justice for the victims of terrorism.

Guantanamo has been a place of physical and psychological torture, the imprisonment of innocent men, brutal forced-feedings to break hunger-striking prisoners, and the pain of indefinite detention without charge.

The prison remains a profound violation of law. It is a threat to U.S. security and a blow to our ideals.  It is an insult to the world, to the tenets of all religious faiths, and to the idea of human rights. We are asking you to use your influence to close down the prison facilities at Guantanamo.

These two issues are so critical that we are prepared to wait in your office until you are able to meet with us and to confirm that you will take action on a vote on the War Powers Act regarding Yemen and that you will initiate a process to close down the prison at Guantanamo.  Thank you for giving these matters your urgent attention.