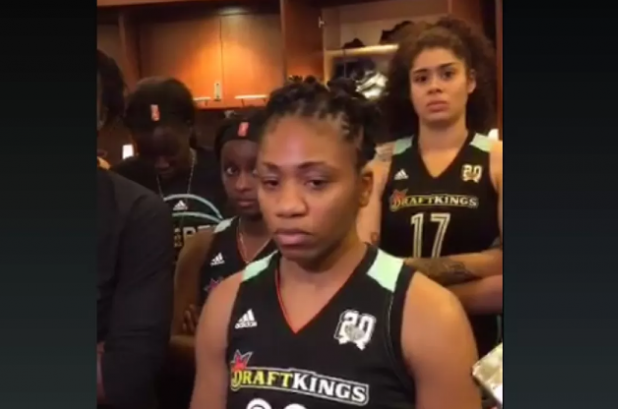 WNBA Players Boycott After Being Fined For Wearing BLM Shirts

On Thursday morning, the WNBA levied fines against three teams and their players for donning uniforms worn to protest the recent spate of police killings of black people.

On Thursday afternoon, the players responded.

Following their game at Madison Square Garden, players from the New York Liberty and Indiana Fever, two of the teams that received the fines, refused to take questions about any subject other than Black Lives Matter, and the WNBA’s response to their protests.

“We feel like America has a problem with the police brutality that’s going on with black lives around here, and we just want to use our voices and use our platform to advocate for that,” the Liberty’s Tanisha Wright said according to Deadspin. “Just because someone says ‘Black Lives Matter’ doesn’t mean that other lives don’t matter. People put out this imaginary ‘black lives only matter’ whenever people say, ‘Black lives matter.’ What we’re saying is, ‘Black lives matter, too.’ Period.” Wright continued: We really feel like there’s still an issue here in America. And we want to be able to use our platforms, we want to be able to use our voices, we don’t want to let anybody silence us and what we want to talk about. It’s unfortunate that the WNBA has fined us and not supported its players. Meanwhile, the Liberty’s Tina Charles accepted the Player of the Month award with her uniform inside-out, explaining why she did so in an Instagram post. In the Indiana Fever locker-room, star Tamika Catchings also said she would only address questions related to Black Lives Matter. Excelle Sports has the clip. “There’s a lot of other stuff outside of basketball that’s going on that, as a whole, all the players have grabbed a hold of,” Catchings said. “I think it’s important that us as players — being able to utilize our voice, and being able to stand for, and stay united for what matters to us.” On social media, players from other teams tweeted their displeasure with the WNBA.

Worried about a cause that speaks to 70% of our league? Yes, we might lose a little. But ever think we might gain more… Respect? #WNBA

The protests began when players wore shirts commemorating Alton Sterling, Philando Castile and the Dallas Police Department during warm-ups and after games. That prompted the league to issue a memo this week warning that the shirts were in violation of its uniform code, which in turn prompted players to wear all-black shirts, at which pointed the league began handing down fines.

The WNBA has not yet issued a response to this afternoon’s events.