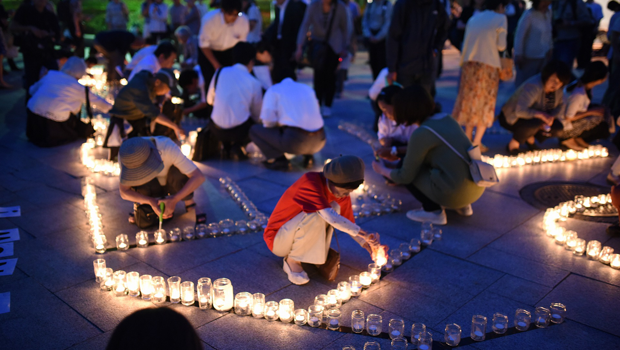 Women March Around The World To Demand Nuclear Disarmament

On 17 June, thousands of women gathered in New York City and around the world to protest nuclear weapons and support their prohibition. The Women’s March to Ban the Bomb took place two days after the opening of negotiations for a international treaty to ban nuclear weapons and was an entirely women-led initiative, following in the footsteps of decades of women’s leadership in anti-nuclear activism.

The Women’s March to Ban the Bomb took place as around 130 governments resumed negotiations in the United Nations on a ground breaking new treaty that will ban nuclear weapons. When adopted, such a treaty will make it illegal for any signatory country to possess nuclear weapons and will impose economic, legal, political, and social barriers to nuclear weapon possession. It will further stigmatize nuclear weapons and help compel their elimination.

“The sufferings of Hiroshima and Nagasaki have continued through generations. It is time for the governments to listen to the voices of women calling for elimination of nuclear weapons, and this is why you will find us on the streets today” stated Kozue Akibayashi, the President of the Women’s International League for Peace and Freedom (WILPF), which is hosting the march.

“Securing a nuclear-free planet is not a luxury but rather it is a requirement for our collective future,” says Leslie Cagan, the lead organizer of the one million person march in New York in 1982 who is now an organizer for the People’s Climate Mobilization and who spoke at the rally.

Despite being staunch advocates for disarmament and peace, women’s voices are often overlooked or marginalized in disarmament and security decision-making processes, as are the voices of other groups whose lives and communities are impacted by nuclear weapon testing, developing, stationing or maintenance.

The 130 countries that support the ban treaty face opposition from nuclear-armed countries and their nuclear-supportive allies. One of those being the United States. Ray Acheson, programme director at WILPF says “The United States is spending $1 trillion USD over the next thirty years to modernize its nuclear weapon arsenals and triple the killing power of these weapons.” This excessive spending comes in contrast to proposed cuts to vital anti-poverty programmes and healthcare – including reproductive rights – which will have a disproportionate impact on women.

WILPF and its event partners see a connection between the current momentum of political resistance in the United States and what is happening inside the UN. There are similarities in the demands for a change to the status quo and frustration with double standards and false promises.

“Just as many people have been marching in the United States for justice and equality, inside the United Nations smaller and less influential countries are standing up to the powerful nations that hold us hostage by having these weapons,” continues Ms. Acheson.

The march is hosted by the Women’s International League for Peace and Freedom (WILPF) and supported by dozens of co-sponsor and partner organizations that are representative of peace, disarmament, women’s rights, indigenous, environmental, and human rights communities, among others.

There were over 60 sister events taking place in other cities across the United States, such as in Australia, Cameroon, Canada, Germany, Ghana, Italy, Japan, the Netherlands, Nigeria, New Zealand, Philippines, Switzerland, and the UK.

HERE ARE IMAGES FROM AROUND THE WORLD:

A group of Arran residents from all faiths and none gathered in support of nuclear disarmament. Gie’s Peace @ScottishCND #womenbanthebomb pic.twitter.com/f9O5eptLM9

Today humanity came out to show how much it wants a ban on Nuclear Weapons. The #womenbanthebomb march was a resounding success! pic.twitter.com/alqejxKy7E

Want to know and see the people marching? This is a fast video that shows all people involved! It’s amazing! #WomenBanTheBomb #NuclearBan pic.twitter.com/Iend83UOcf

A final thought from today’s rally. Thanks to all for inspiration, determination and a great afternoon. #womenbanthebomb #NuclearBan pic.twitter.com/3mhqqbnhRH