March 8 is International Women’s Day and around the world, women protested for equal rights and an end to sexual violence and exploitation.

The first National Woman’s Day in the United States, February 28, 1909, in New York City, organized by the Socialist Party of America.

The first National Woman’s Day was observed in the United States on February 28, 1909, organized by the Socialist Party of America, to honor the 1908 garment workers’ strike in New York. Thousands of people showed up to various events uniting the suffragist and socialist causes, whose goals had often been at odds. The 1910 International Socialist Woman’s Conference adopted a proposal that “a special Women’s Day” be organized each year.

The roots of the movement in the United States date back to the abolition of slavery. In 1848, women were barred from speaking at an anti-slavery convention. In response, Elizabeth Cady Stanton and Lucretia Mott brought together several hundred people at the first US women’s rights convention in New York demanding civil, social, political and religious rights for women. 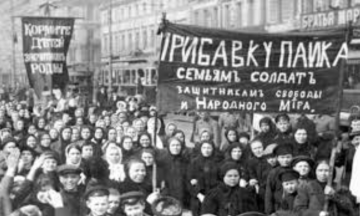 Women’s Day had an important link to the transformation of Russia as a massive protest was a key to the chain of events that led to the abdication of Czar Nicholas II and the Russian Revolution. The government that formed after his abdication was the first government of a major power to grant women the right to vote. To remember it, Vladimir Lenin, founder of Russia’s Communist Party, declared Women’s Day an official Soviet holiday in 1911.

In Spain and China, Communists adopted the Women’s Day holiday as well. Until the mid-1970s, International Women’s Day was celebrated primarily in socialist countries. 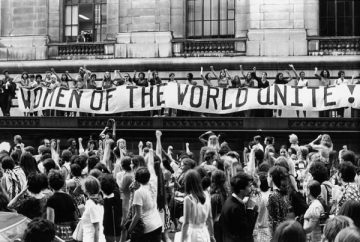 The UN adopted it in 1977 and described the day as “a time to reflect on progress made, to call for change and to celebrate acts of courage and determination by ordinary women, who have played an extraordinary role in the history of their countries and communities. The world has made unprecedented advances, but no country has achieved gender equality.” They point out “legal restrictions have kept 2.7 billion women from accessing the same choice of jobs as men. Less than 25 percent of parliamentarians were women, as of 2019. One in three women experiences gender-based violence.”

By 2014, International Women’s Day was celebrated in more than 100 countries and had been made an official holiday in more than 25 countries.

This year Associated Press reported on many people marked the day “with calls to end exploitation and increase equality” at protests.

Chile, where there have been large protests against neoliberalism, had one of the largest women’s rights demonstrations. Tens of thousands were in the streets of Santiago, the capital. Some of the participants chanted, “They kill us, they rape us and nobody does anything.” Women called for a new constitution that strengthens the rights of women. Some marchers showed solidarity with Argentine women who are seeking legal abortion rights, by wearing green scarves.

In the capital of Spain, Madrid, women marched behind a massive banner that said, “with rights, without barriers – feminists without frontiers.”  Thousands marched in various Spanish cities.

There were efforts to stop women’s protests in Pakistan through court proceedings, but women rallied across the country. Conservative groups threatened to stop the marches by force but Pakistani officials pledged to protect the marchers. The slogan of last year’s march: “My body, my choice,” angered people in this conservative country. Reuters reports “Islamists pelted campaigners with stones, shoes and sticks as they marched through Pakistan’s capital on Sunday to mark International Women’s Day.” Police official Mazhar Niazi said the officers blocked the Islamists as they tried to break through a cordon to attack the marchers.

AP further reports, “Tensions marred some celebrations on Sunday, with police arresting demonstrators at a rally in Kyrgyzstan and separatists detonating a bomb during a ceremony in Cameroon.”

Yesterday, we reported on the International Women’s Day protest in France, French Women March For Equal Rights In Solidarity With Women Around The World, where thousands took the streets for equality and an end to violence They were met with tear gas, police assaults and arrests, as has become the normal reaction of the Macron government to nonviolent demonstrations.

This Monday, March 9, women in Mexico are planning a mass strike, A Day Without Us,” to raise awareness that ten women are murdered daily. This will be the first all-women labor strike in the country’s history, and it could have a massive impact with 22 million women in the workforce.

Below is some social media reporting on protests held on March 8, 2020.

Aerial footage of the massive and historic International Women’s Day march in Chile.

Over a million Chilean women have reportedly taken to the streets of Santiago to protest against sexual violence.

#IWWD2020. Thousands gather and march from Liwasang Bonifacio to Mendiola today to protest the anti-women and anti-people policies of the Duterte admin in time for the commemoration of the International Working Women’s Day.

Here’s a piece that explains the more revolutionary roots of #IWD — and how the holiday became a powerful way for women’s anti-war protests: https://t.co/2FU2K5Hqdp via @NatGeoUK

“Manif Pour Tous, a group promoting family values, gather outside the National Assembly in Paris on International Women’s Day to protest a bill that would allow lesbian couples and single women to have children via medically assisted means.”
Source @afpfr▶️https://t.co/96oOOPufND pic.twitter.com/NBpu6TFBwL

Here’s a piece that explains the more revolutionary roots of #IWD — and how the holiday became a powerful way for women’s anti-war protests: https://t.co/2FU2K5Hqdp via @NatGeoUK