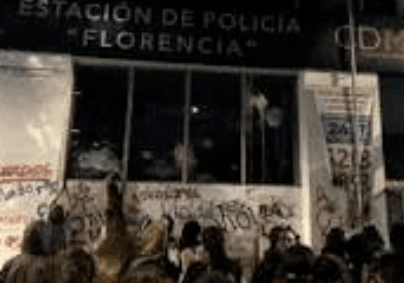 Above Photo: From Counterpunch.org

About two thousand people, mostly young women (many of whom identify themselves as anarcofeministas), marched and rampaged through the Zona Rosa area of Mexico City on Friday, August 16. This was the second such action in less than a week. The first, on Monday, was in direct reaction to a young woman’s accusation against four police officers whom she says raped her and to the new López Obrador-linked city administration’s inaction. (The district attorney had announced that she would close the case because the accuser did not identify the suspects on time.) On this first occasion, the women committed minor vandalism at a police headquarters and doused the police chief with pink glitter. The shocked, hysterical reactions of the local establishment, including (and perhaps especially) “progressive” government leaders, the notion that throwing glitter on somebody, especially on a cop, was more violent than the rape and murder of women, inspired Friday’s actions, where there was also glitter everywhere, along with graffiti, the destruction of at least two stations of the Metrobús (a bus system with exclusive lanes and platforms where one pays at a tourniquet as in a subway system to permit rapid boarding), and the blocking of main arteries for several hours during rush hour.

The location was apparently chosen because the main police headquarters is in the area, as is a statue, the Ángel de la Independencia, a traditional focal point for protests. The Zona Rosa is also one of the biggest GLBTQ gathering places in Latin America. I’m almost innocent: I was only stopping off there to wait out rush hour, which in Mexico City on Fridays is from 5:30 to 11 p.m. As I ascended from the Metro station, I heard jubilant and angry female voices and guessed what was happening. But it was hard to tell where the sounds came from. Some were from the Metrobús platform, some were from a circular, elevated street that defines the plaza known as la Glorieta de Insurgentes, a popular open-air hangout for young people of whatever sexual orientation. I watched for a while and didn’t see many of the people I have usually seen in about 20 years of going to marches in the city. When I finally did, I asked if there was a men’s area. They said: “In the back.” I went there and marched for a while. There were two or three groups of a few hundred people each whom I could see and other smaller affinity groups on the side streets. The ones in front asked the ones in back to hurry up, to head for the Ángelmonument, but there was always another squad car or bus to paint, another window to break, another spot to make a gasoline-only bonfire. Some of the slogans:

“Rapists’ dicks to the blender.”

While it’s true that a catharsis does not a revolution make, it is certainly preferable to the apathy, resignation, and obsession with electoral politics that have been in fashion lately.

After Monday’s protest, the mayor, Claudia Sheinbaum, had said that this was an affront to the honorable and democratic police and that it surely had been the work of infiltrators. On Friday I saw no evidence of anybody who disagreed in general with the actions that were being taken, no pleas for pacifism, and in fact spokespeople for the Monday action defended everything that had happened and did not disavow anyone. I learned that the triggering incident was one of several police gang rapes that have allegedly occurred just in the past few weeks. Another was at the Hotel Pennsylvania, a prostitution-oriented hotel near the monument to the revolution. Added to this is the well-known pattern of murders of women in Mexico, all over the country, which now registers at 6 to 8 per day according to various statistics and seems to have worsened this year.

Women have been saying “Enough” for a while, but now they have said it in an inflammatory way. Literally. About a block before we got to the Ángel, I heard loud cheering again and saw and heard lots of people battering the windows and walls of what turned out to be a police station with what Arlo Guthrie used to call implements of destruction that included everything except fly-swatters. I saw that one of the doors was open and that a woman was standing on top of it to reach an air-conditioning unit; I don’t know for what purpose. But soon people moving around, their faces covered, appeared in the second-and third-floor windows and then high flames and smoke. Now I know what a burning police station smells like. As reporters and camera people appeared, mostly male, and it became difficult to know who was really a media person and who was a cop, the requests that men leave the scene became insistent, and the smell became more irritating, so I moved out beyond the edge of the crowd. I think this is when a reporter for the newspaper El Universal was apparently beaten, but by a man, one who is seen in photographs taking orders from an older man who is believed to be a police coordinator of provocateurs. The police did what they had to do: send the female officers in to take the biggest risks in order to protect the station and an adjacent office building. (Both were unoccupied, as it was around 8:30 by now.) To dispel once and for all the notion of a division between “infiltrators” and non-violent protesters, the women chanted, especially as a fire truck and the police approached, “!Fuimos todas!”: “We all did it!”

I had a euphoric feeling from the moment I arrived to the Zona Rosa, but when I saw the police station under siege I could identify specifically why: “This must be what it felt like to be at Stonewall in 1969.”