Women Stand Defiantly At The Vanguard Of Lebanon’s Protest Movement

In Beirut’s calls for revolution stand a distinct army that are protecting the mass protests from falling into violence: the women’s frontline.

Throughout the sprawling anti-government protests that have brought Lebanon to a halt, the country’s women have positioned themselves at the front line of protests. As they assert their role in the demonstrations, they are also redefining their role in Lebanon.

For over a week they have been forming human walls between protestors and security forces to ensure that the Lebanese revolution is peaceful. Now they face new resistance as police have deployed women officers to assist clearing the roadblock revolution and violent Hezbollah supporters have descended on the capital.

The women’s frontline began on the third day of the demonstrations, as a small group of women stood between riot police and protestors in front of one of Beirut’s principal government buildings.

After the first two nights of anti-government gatherings, in which tear gas canisters, rubber bullets, and water cannons were deployed against protestors, they did not want to see further clashes.

‘They would never hit a woman, so us being here in big numbers stops violence on both sides’

“They would never hit a woman, so us being here in big numbers stops violence on both sides,” said Heba, a 19-year-old economics student at the American University of Beirut.

As word quickly spread of what they were doing, the women’s front line grew in strength.

Since that first Saturday, the women, often three or four rows deep, guard the space between the protesting masses and security forces.

Outside central Beirut, women have been a key factor in the success of acts of protest across the country. Throughout the past week protestors have been trying to close down roads, hoping to bring the country to a halt and maximise pressure on the government.

With the police trying to dismantle roadblocks and open the roads, the women’s front line yet again sprung to action.

At a normally busy intersection on the edge of Beirut’s Downtown, the Lebanese police deployed female officers on Saturday to remove the women protestors taking part in a sit-in. For a time police succeeded in reopening one lane of the highway but as more protestors joined, the police finally gave in.

The security forces’ new tactics stood little chance against the protestors’ determination to keep the roads closed. “We’re not going anywhere,” said Fay Abu Hassan, 30. “They can bring dog cops and we’re not going to get off the street.”

“It didn’t really matter if it was men or women trying to pull us off the street,” agreed her sister Fairuz. The 27-year-old actor believes the protestors hold a key advantage: “The police are with us, they’re with what we’re trying to say.”

‘Violence is not our revolution’

Gender equality, LGBT rights and female empowerment have all been common themes of the protests. For some, the protests are making clear the vital role women play in the country’s society.

“What we’re trying to do is show that women … have a role in protecting peace in the country,” said 42-year-old Naila Saba. “This is a peaceful protest and it needs to remain that way.”

Prime Minister Saad Hariri has on multiple occasions said that the government supports peaceful protests. Naila believes that if the protests descend into violence the government would declare a state of emergency, and completely shut down the protests with force.

“If it turns into riots they can declare a state of emergency and shut everything down,” she said. “We can’t fight against guns and tear gas, it’s not going to happen.”

According to Naila, her role as a mother has helped raise support for the women’s frontline. “I just started showing up to show solidarity and then realised that there’s a lot of help that they needed,” she explained.

The women were poorly prepared for rainstorms in the middle of the week. Naila messaged some of the mothers’ groups from her children’s schools late on Thursday night: by midnight three canopies had been donated and nine tents promised for the next day.

Having stopped any violence from breaking out in Beirut’s protests for over a week, the women’s frontline faced some of its biggest challenges over the past few days. A group of Hezbollah supporters entered protests on Thursday and Friday, sparking violent clashes that saw a number of protestors wounded.

“I don’t think it will stay safe and peaceful anymore, but we’re rising to the challenge and trying our best,” said 20-year-old Christine.

It’s estimated that over 100 women stood between the main group of protestors and the Hezbollah supporters on Thursday. 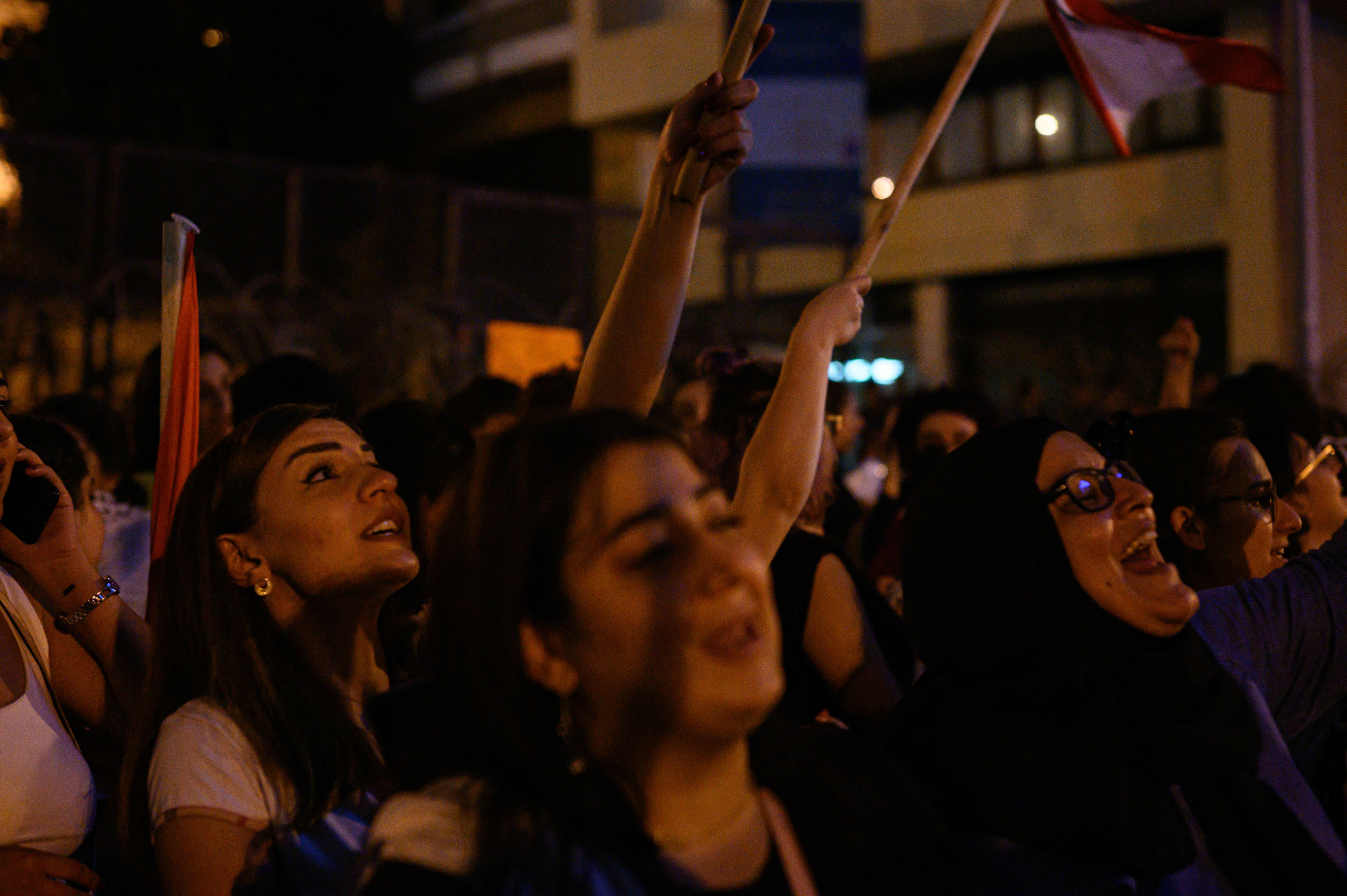 As Hassan Nasrallah, the leader of Hezbollah, was about to speak to the country on Friday for the first time since the protests broke out, the violence of his supporters grew.

Attacking men and women indiscriminately whenever they could break through the riot police, and throwing rocks at the protestors when they couldn’t – the women and girls of the front line stood strong throughout.

As Nasrallah rounded off his speech urging his supporters to quash the violence and leave the protests, they again endured a fresh wave of violence as they exited Beirut’s Riad al-Solh square and moved to the highway.

“We are here to protect our army,” said Sepan, one of the organisers of the women’s frontline, referring to the masses of protestors.