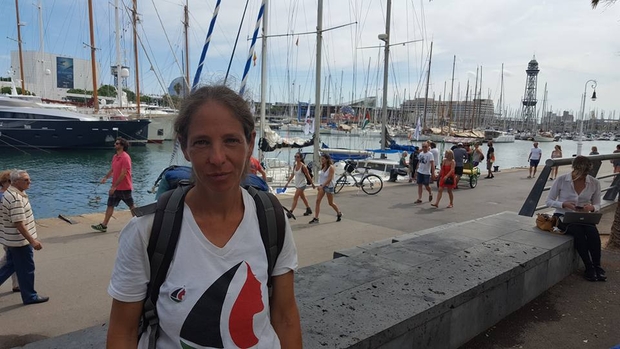 Women’s Boat To Gaza (WBG): An All-Women Boat, To Break Siege Of Gaza

Above Photo: Zohar Chamberlain Regev is an Israeli citizen and has participated in the coordinations of Rumbo a Gaza, (Boat to Gaza) the Spanish component of the Freedom Flotilla work since 2012 (Photo credit: Vyara Gylsen)

A group of women from all over the world are about to embark on a dangerous journey on board the Women’s Boat to Gaza (WBG). Two vessels are leaving from Barcelona on 14 September with the goal of reaching the besieged Palestinian enclave by early October in a symbolic breaking of the Israeli-Egyptian blockade.

One of these women is Zohar Chamberlain Regev, an Israeli citizen who was born and raised in Kibbutz Kfar Hahoresh, near Nazareth. She has been living in Spain for the past 12 years and has been involved in the Spanish component of Freedom Flotilla work since 2012. She coordinates the Women’s Boat to Gaza Steering Committee and is a team leader onboard the Amal.

“We want to give visibility to women in Palestine who have been struggling alongside the men since before the Nakba, since the beginning of the Zionist colonisation of Palestine,” says Regev.

The flotilla’s mission is part of a campaign to break the ongoing Israeli-Egyptian siege imposed on the Gaza Strip. The two boats Amal (Hope) and Zaytouna (Olive) will stop at two ports before sailing off to Gaza carrying their full capacity of 30 people.

The boats will set sail from the Bosch i Alsina dock in the Port of Barcelona and will be raising awareness of the ongoing struggles that Palestinian women face in Gaza, the West Bank, inside the Green Line and in the wider diaspora. The mission will aim to reach the shores of Gaza by early October and will be sailed by an all-woman crew.
The participants include Nobel Peace Laureate Mairead Maguire (Northern Ireland), Marama Davidson, Green Party MP (New Zealand), and Cigdem Topcuoglu, a professional Turkish athlete and coach who sailed on the Mavi Marmara in 2010 and whose husband was among the 10 activists killed by Israeli forces on that voyage.

Launched on 8 March 2016 on International Women’s Day, the initiative wants to raise awareness oftherolewomen play in Palestine’s resistance movement, the survival of the Palestinian people as a whole, and the impact of the Israeli occupation.For the past two days, locals and international supporters have been flocking to attend the activities hosted by Rumbo a Gaza (Boat to Gaza) to mark the launch. Hundreds attended the events, including concerts, talks and non-violence training.

Wendy Goldsmith is part of a Canadian boat to Gaza coalition. She is on the steering committee of the International Flotilla Campaign to end the blockade of Gaza and is a team leader on the Amal.

“If I was living in an open air prison and not allowed to come and go and trying to raise a family, probably with family members imprisoned or killed, I would want people in the world to be helping me and speaking out,” she says.
Jaldia Abu Bakra, originally from Gaza, is one of the activists on board and she feels passionately about the involvement of women in this mission.

“This voyage means one more step forward in the struggle for all women everywhere. Despite the fact that women have been active from the very beginning of the colonisation of Palestine in the 1880s, taking active part in the struggle against colonisation, some people still seem to feel that women don’t have a role, that they are secondary.

“This flotilla is a recognition of their role in the resistance.”

Another main objective of WBG is to contribute to the Palestinian call to the international community to help end the illegal occupation of Palestine and lift the siege on Gaza that is now entering its 10th year. The international community is mostly in agreement that the siege on Gaza is illegal. However, little has been done by world leaders to end the collective punishment of the civilian population.

Abu Bakra explains: “It’s very important for the Palestinians to know that there are people in the world who know and care about their struggle, because for a long time it has been a relatively invisible one. International acts of solidarity give Palestinians a shot of hope and the drive to continue their struggle.

Ann Wright, a former US army colonel and former US diplomat is one of the boat leaders and has been on flotillas to break the siege on Gaza before, including in 2010, 2011 and 2015. She is also the team leader on the Zaytouna.

“We as international women stand in solidarity with the women of Gaza who have been under intense pressure as the leaders of their families, as the Israeli brutal military assaults happen. It’s the women who hold families together and we’re proud to have a Women’s Boat to Gaza in solidarity.”

“We hope that people will put pressure on their governments to hold Israel accountable, to put sanctions on Israel for what it’s doing to the Palestinians and to tell them to lift the blockade,” she added.

This is the Freedom Flotilla Coalition’s (FFC) fourth and latest initiative to steer the world’s attention back to the untenable conditions that Palestinians of Gaza are forced to live under. It is a call for an immediate end to the siege.

Previous attempts by the FFC and others to break the Gaza siege by sea have led to boats being intercepted by the Israeli navy. The Israeli navy has repeatedly attacked, arrested and imprisoned crew and participants, in addition to confiscating boats and property belonging to crew and members. The most notorious case was the Mavi Marmara in 2010, when the Israeli military killed 10 activists on board the ship and wounded more than 50 passengers.

Goldsmith says the women are well aware of the likelihood they will be intercepted by force by the Israelis. “Our goal is always to challenge and break the illegal blockade of Gaza, however, we do know that for the past four flotillas, Israel has intercepted them illegally in international waters and has kidnapped the people on the boats and detained them against their will.”

But she says that the women are optimistic despite the challenges they face. “One of our boats is called Amal-Hope and that’s what we are going to carry in our hearts. It’s hope that we will reach the shore.

“We are [believers in] non-violent action but we will also not give up our boat willingly or easily. We will use a variety of non-violent tactics that people feel comfortable with on the boats to make sure that we don’t make it easy for Israel to steal our boats.”

Ghada Btah, the spokeswoman for the International Committee for Breaking the Siege on Gaza (ICBSG), said that the boats Amal and Zaytouna will convey messages of determination and hope to the world, especially to the people of Gaza.

“The activists boarding the boats are hoping to break the siege and reach the shores of Gaza to raise of awareness of the struggle the Palestinian people have been enduring for a long time.

“We hope to alert the world’s conscience to work tirelessly to end this brutal siege on Gaza,” she adds.

Israel has besieged Gaza by land, air and sea since 2007, following Hamas’s takeover from the Palestinian Authority’s security apparatus. Around 1.8 million Palestinians are “locked in and denied free access to the world,” the UN’s Office for the Coordination of Humanitarian Affairs reported in July 2015.

By applying restrictive measures that affect the population as a whole, Israel violates international humanitarian law, including the Geneva Conventions, which prohibit collective punishment. Israel is also currently being investigated by the International Criminal Court for war crimes.

Gazans have suffered three deadly assaults since the siege began, killing thousands and injuring tens of thousands. Schools, hospitals and homes have been destroyed, and vital infrastructure such as the systems providing water, electricity and sewage have been decimated.

According to the UN Office for the Coordination of Humanitarian Affairs (OCHA), of the 2,251 people killed in Israel’s most recent assault on Gaza in 2014, 299 were women while over 551 were children. Al Mezan Centre for Human Rights, a Palestinian NGO, reported that 600 women suffered miscarriages during the offensive.

In the same year, more than 40,000 pregnant women were deprived of access to basic reproductive health services and approximately 5,500 deliveries took place in extremely poor conditions.

Dealing with loss and grief

Some 791 women lost their husbands during the Israeli war in addition to 34,697 others, who were evacuated from their homes, the NGO added.

The report, Through Women’s Eyes, notes Gazan women’s continued struggle “as they attempt to come to terms with their grief and their injuries, with the loss of their children, their husbands, their relatives, their homes, and their livelihoods”.

In addition to having to cope with personal trauma, women are also the primary caregivers to at least 425,000 children in need of psychosocial support.

“The siege affects us all, but it especially affects women,” says Jummah. “In recent years, more women have been forced to become the heads of their families because their husbands have been killed, or are in Israeli prisons, or are unemployed as a result of the siege. But the majority of these women have no means of earning money.

‘We know there are risks’

Goldsmith says that many women’s groups in Gaza will be waiting to receive them should the women’s flotilla get through. “We know that there are many women’s organisations, NGOs and members of civil society who are waiting in anticipation for us to arrive.

“We know that there are risks. If we are intercepted, it will be occupation forces with guns and they will be very intimidating and of course we are afraid, but I’m more afraid of not doing anything.

“I’m willing to put myself on this line because it’s a cause I really believe in and I think that all of humanity needs to wake up and see what’s happening in Gaza.”