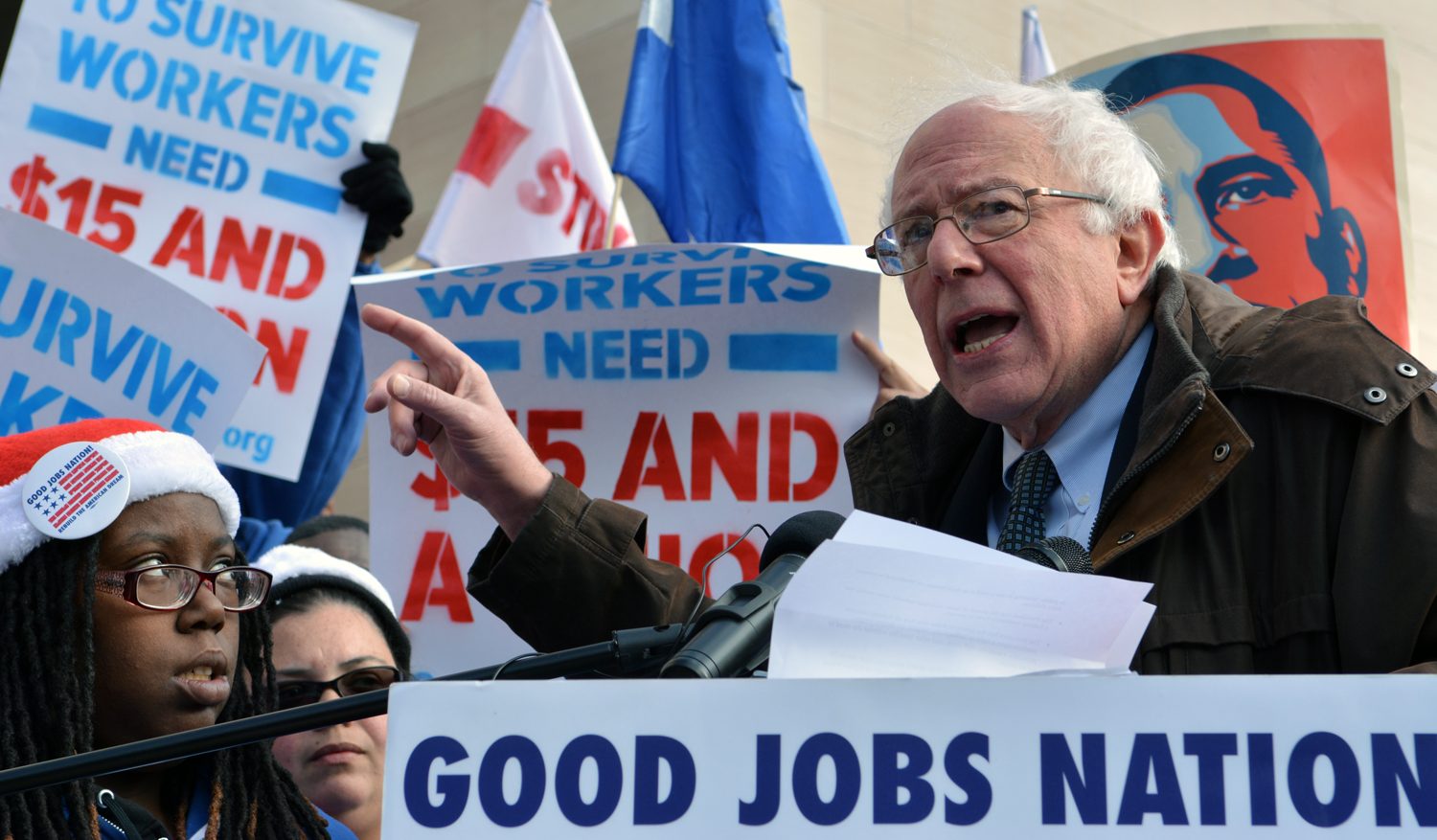 Labor Groups Angry that Biden and Democrats Didn’t Push for the New Base Pay in the $1.9 Trillion COVID Relief Legislation.

Women comprise the overwhelming majority of frontline workers who risk their lives and the lives of their families during the ongoing COVID-19 pandemic. But the Democrats who they helped retake the White House and the Senate don’t seem so interested in rewarding that support.

The proposal to set a $15 an hour minimum wage by 2025 in President Joe Biden’s signature $1.9 trillion American Rescue Plan could have helped lift some 74 million poor and low-income women out of poverty, according to the Poor People’s Campaign.

But eight Senate Democrats opposed the measure. Team Biden also declined to challenge arcane and non-binding parliamentary procedures, supposedly prohibiting a $15 minimum wage in the coronavirus relief package. That’s understandably left a bitter taste in the mouths of many who helped get Democrats elected. It also stoked a renewed and fiery determination to press the fight until it’s won.

“During the presidential election, we had over 1,700 laid off hospitality workers knocking on doors of three million voters in four battleground states — and that made a critical difference in the results,” said Marlene Patrick Cooper, president of UNITE HERE Local 23. It represents more than 4,000 airport workers in 13 states from Georgia to Idaho.

Members of Local 23 — overwhelmingly women of color suffering pandemic-related layoffs — joined other worker advocates in knocking on 1.5 million doors in the successful effort to elect Democrats Jon Ossoff and Raphael Warnock to the U.S. Senate from Georgia.

“Our folks sacrificed time away from home and their families canvassing, knocking on doors, to get out the vote because their lives depended on it,” Cooper said. “Now, it’s time for us to continue to hold this administration accountable and push them to pass transformative legislation for working people.”

According to the Poor People’s Campaign, in a report titled A Call for a Moral Revival, women constitute almost 60% of low-wage workers who have all been hit hardest by the pandemic.

Rhiana Ford, a server earning a pre-tip wage of $5 an hour at the Fort Lauderdale Airport in Florida, broke her foot during canvassing efforts in Georgia as a member of the union’s Local 355. She also provides care for her 90-year-old father.

“I left my home, I left my dad, I left my sister, I left my fiancé — I left everyone here and risked my life to go to Georgia during a pandemic to make sure I could have a better future…

The lack of support for better pay is making many workers rethink the idea that those at the top earned their money by tolerable, if not perfectly fair, means. The idea that wage suppression helps wealth pile up at the top is gaining acceptance, which, at a self-preservation level at least, ought to concern the best-paid one in a thousand households, the ones with million-dollar-plus annual paychecks.

“I broke my ankle in Atlanta — and I’ll do it again for this $15 an hour,” Ford says. “I refuse to take pennies while people live in mansions.”

Recent history makes it clear, that’s exactly what millionaire political elites on both sides of the aisle think.

The frustration of low-paid workers like Ford could spell serious trouble for Democrats in 2022 as Republicans assert they are poised to take back the House by appealing to a combination of people frustrated over the pandemic and disaffected workers unhappy with the Biden administration.

Just how Republican policies would benefit low-paid workers isn’t something the GOP says much about. But if voters like Ford simply stay home in 2022, the Republicans, who generally want to end minimum wage requirements, would benefit.

Both Parties to Blame

Antagonism toward raising the minimum wage, which adjusted for inflation was worth about $12 an hour in the 1960s, persists in both parties.

Sen. Joe Manchin (D-W.V.) can’t bring himself to match even the $12 an hour minimum wage that Hillary Clinton advocated in 2016.

Then there’s Rep. Tim Walberg (R-Mich.) who last month moaned during a House Education and Labor Committee meeting that the aborted Raise the Wage Act “doesn’t deal with the realities of what it takes to run a business.”

Politicians opposed to any minimum wage increase typically assert that businesses will go broke, ignoring the fact that businesses can raise prices, especially as America is on the cusp of what economists predict will be a year of robust economic expansion.

The current $7.25 an hour federal minimum wage has not budged since 2009. Adjusted for inflation it’s really just $5.82 an hour.

The sub-minimum wage for tipped workers in restaurants has been fixed at $2.13 since 1993, under a deal President Bill Clinton agreed to with former takeout pizza executive Herman Cain. In 2021 dollars that’s about $1.18 an hour with tips filling in the shortfall to $7.25.

Overall, some 140 million Americans are poor or low-income. They are also those hit hardest by the pandemic. Women comprise more than 30% of the low-wage workforce, while roughly half of all U.S. children are subsisting near or below the poverty line.

Rev. William Barber, who started the Moral Mondays demonstrations at the North Carolina state capitol, says it was the desire by poorly paid workers to earn $15 an hour that was behind the Democrats taking control of the Senate this year.

“The two senators from Georgia got elected because of $15 — let’s be real about that,” said Barber, co-chair of the Poor People’s Campaign. “If they had run on just dealing with racism and health care, they would not have made it.”

Barber is not surprised that no Senate Republican backed the push for $15 an hour minimum wage, which if phased in over the next four years would only be worth about $13.50.

“We already knew what they were going to do because they stood with Trump,”  Barber says.

“But when eight Democratic senators — seven white men, one white woman — cross over and block $15 and a union, which is a compromise in and of itself, and hide behind a parliamentarian and say, it’s not the time, but I’m ready to do $11 over three years — we cannot accept that.”

Sen. Mitt Romney (R-Utah) co-sponsored a competing plan to raise the minimum wage to $10 by 2025, which adjusted for inflation would be an increase of about 30-cents compared with today, leaving the lowest-paid workers far short of where they were in 2009.

Organized labor’s drive for a $15 an hour minimum wage has always been a modest proposal — even when it was first launched in New York City way back in 2012.

In 2016, 1199 SEIU United Healthcare East — the largest healthcare union in the nation — backed Hillary Clinton over Bernie Sanders for president, along with many other powerful unions — even though Clinton failed to match Sanders’ commitment to a $15 an hour federal minimum wage.

At the time, George Gresham, the chapter president who was also then head of N.Y. Gov. Andrew Cuomo’s “Campaign for Economic Justice,” said that worker advocates would first have to win a $15 an hour minimum wage — and then fight for indexing it to inflation.

“We don’t want to scare people,” Gresham told me five years ago. “First we’ve got to get a living wage established. Then we fight to index that going forward into the future.”

In contrast, many of the tax breaks awarded to wealthy people with Republican sponsors are automatically adjusted for inflation.

Despite some crucial pandemic aid, worker advocates who stumped hard for the Democratic ticket insist they’ve more than earned the right to criticize the $1.9 trillion coronavirus relief package where it fails to deliver for working people.

Sunita Viswanath, a co-founder of Sadhana and Hindus for Human Rights, is also upset that a minimum wage hike was cut from Biden’s pandemic relief legislation.

“I am so disheartened that even after we elected the Democrats back to power — this is the side that is supposed to care about the poor and equity — we’re still fighting this fight like this,” Viswanath says. “There’s a lot in the stimulus bill has a lot in it that’s good — and we applaud that. We like the expanded child tax credit — but how does it make sense to give a child tax credit and give the parents poverty wages? The stimulus package as it stands is not the best we can do.”

“It is not, on its own, enough to address child poverty, let alone cut it in half,” she says.

‘Get with the People’

Mary Kay Henry, head of the Service Employees International Union (SEIU) — the leading union behind the nearly decade-old Fight for $15 movement — says passage of Biden’s signature policy goal is “not a time for celebration.”

She said that the eight Democratic senators who voted against a $15 minimum wage need to “get with the people of their state.”

“We will win a $ 15-hour minimum wage and we will win every fight for justice that is part of this incredible fusion movement,” said Henry. It is unclear whether union Democrats will try to unseat any of the eight.

Traditionally, organized labor has generally backed establishment Democrats even in the face of increasingly diminishing returns. But when it comes to a $15 minimum wage, Cooper says the Democrats should not expect trade unionists and their allies on the front lines to “dance and be happy.”

“We cannot,” says Cooper, the union local leader representing airport workers seeking $15 an hour at least. “We will not stop and we are not going away.”

The Biden White House says it has not given up the fight for $15. It has not made clear just how it could achieve that goal since Senate Republicans can still block legislation requiring a 60-vote Senate majority and Democrats hold only 50 seats.