The Working People’s Day of Action is about demanding an end to the rigged economy and defending our freedoms.

On February 24, protesters stood up for the freedom of working people to come together and fight for decent and equitable pay for their work, affordable health care, quality schools, vibrant communities and a secure future for all. Tens of thousands of workers participated in  protests in 28 cities nationwide. 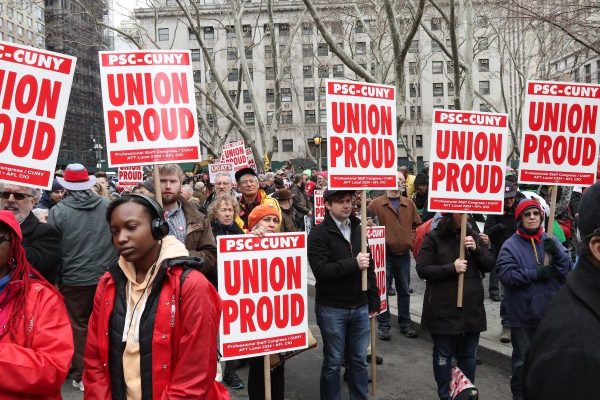 Workers protested across the country because on Monday, the Supreme Court will consider Janus vs. AFSCME — a case that could weaken public employee unions by challenging a longstanding precedent that protects the ability of public employee unions to represent their members and even nonmembers and to speak out on matters of public interest. The challenge to an Illinois law that allows government employee unions to collect fees from workers who choose not to join could affect more than 5 million government workers in 24 states and the District of Columbia. Public sector union members make up close to half of all U.S. union members.

The national day of action is part of a rising labor movement. Jobs With Justice reported:  “In just the last few weeks, more than 70 cities observed a Moment of Silence to honor the two Memphis workers who were crushed to death on the job and sparked the pivotal 1968 strike; fast-food workers walked off the job in dozens of cities on the anniversary of the strike; and activists in the new I AM 2018 campaign and Poor People’s Campaign kicked off efforts to mobilize and energize thousands of people across the country.”

The Progressive reports “What is at stake is ‘more than just the ability to collect dues,’ says Sarita Gupta, executive director of Jobs with Justice. . . ‘An adverse ruling would fundamentally weaken the institutions of labor … one of the most organized and successful institutions that represents working people in our economy and our democracy.'”

The Daily News reported, “Hundreds of union workers gathered in lower Manhattan Saturday to chant, cheer and wave signs in a show of unity ahead of a Supreme Court hearing that could have a profound effect on organized labor.

Our hard-fought civil rights are under attack by a handful of corporate elites who want to divide us. That’s why we’re taking action in Washington and across the country today. #ItsAboutFreedom #UnrigtheSystem pic.twitter.com/0M5EO7UWVx

Amen to the working people spending their rainy Saturday in solidarity to #UnrigtheSystem that had left too many families behind while the rich get richer on our backs and labor. pic.twitter.com/IsHgj5ifbt

This is ONE city in CA, Anaheim & it looks like Syria
It’s like this in EVERY liberal city in CA
How much “tolerance” is expected? How much “diversity”
Global warming & illegals aren’t top priority
Your citizens are ??#Unrigthesystem #CADem2018 #SaturdayMorning #Hollywood pic.twitter.com/g4pndlye0z

The teacher strike in West Virginia is one more powerful symbol that – just like the kids in Florida or the thousands who marched yesterday to #UnrigTheSystem – everyday people are taking back the narrative from a warped president and the media. My column: https://t.co/i5cIkipcOb

❤️ Save a hundred lives you’re a nurse.”#Janus threatens all workers! @NationalNurses is leading the fight to protect the working class. #WeRise pic.twitter.com/x7W1vRRWdN

Hundreds of Council 13 members from all over PA are pouring into Thomas Paine Plaza for the Working People’s Day of Action in Philadelphia! #ItsAboutFreedom #UnrigTheSystem pic.twitter.com/Qso1L1jYFO

THANK YOU to the more than 5,000 people who rallied and marched in Chicago today as part of the Working People’s Day of Action!#UnrigTheSystem #ItsAboutFreedom pic.twitter.com/RXxFWcI6qE

Everywhere we go people want to know who we are so we tell them we are the union #UnrigtheSystem https://t.co/jGYgnnWdfW

Make no mistake: Workers’ rights, including the right to organize unions and en­gage in collective bargaining, are fundamental civil and human rights. #UnrigtheSystem #ItsAboutFreedom pic.twitter.com/Rm3HbqNo6E

Thousands from across Ohio rally at the Statehouse to make clear: Right to Work is Wrong for Ohio. #UnRigTheSystem #BlueWave2018 pic.twitter.com/QhgpYcXQEQ