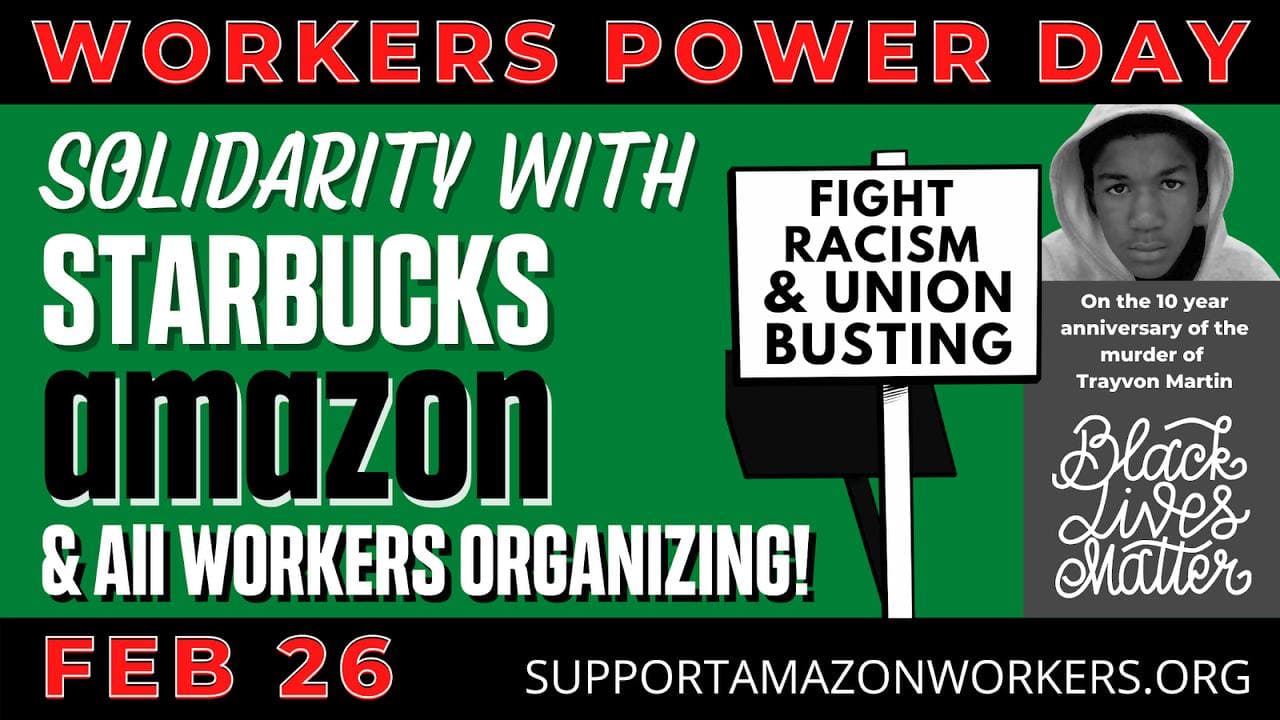 Starbucks workers are leading an electrifying drive to organize the major coffee chain, with one or often several stores announcing they’re joining this growing movement each day. Amazon workers from coast to coast are organizing to build power at one of the world’s largest and most powerful corporations. Workers in Staten Island recently filed to hold union elections at 2 warehouses. The majority Black Amazon workers in Bessemer, Alabama are engaged in their second union campaign, after the results of the first were tossed out based on Amazon’s egregious union busting campaign – which they continue in earnest in Bessemer, Staten Island, and elsewhere.

After nearly 3 years of the COVID-19 pandemic, more and more workers are stepping out and fighting back. While corporations rake in record profits and the small class of billionaires watches their wealth balloon, nearly 1 million workers have been left to die by a government and healthcare system that cares more for money than people. Millions more have had to work in unsafe conditions, risked exposure to themselves or their families, lost their jobs, been evicted from their homes, or have had their communities terrorized by the police and ICE. This crisis has hit Black workers and workers of color, women, migrants, disabled and trans workers particularly hard.

Many more workers at companies big and small are beginning to organize, go out on strike, and to exercise the power we have as workers. From gig workers to domestic workers, tech workers to factory workers, a new fighting spirit is taking hold. From Oakland to New York City, education workers are fighting against the closure and privatization of public schools. Meanwhile, there is growing recognition that every issue is a workers’ issue, whether it’s a struggle on the job, the fight against white supremacy, struggles for reproductive justice, or efforts to oppose U.S. wars.

This growing workers’ movement has the potential to be transformative.

February 26, is also the 10 year anniversary of the heinous murder of Trayvon Martin. The police and racist vigilantes continue to murder and terrorize Black, Brown and Indigenous communities, while bosses use racism at our jobs to divide us and extract more profit from our labor. Workers Power Day will uplift the life of Trayvon Martin and say clearly: Black Lives Matter!

We encourage you to hold actions on Workers Power Day that unite and show solidarity with these many struggles, and connect with local struggles in your area. Actions could be organized at Whole Foods or other Amazon locations, a Starbucks, or another location of significance.

Solidarity with Starbucks, Amazon, and all workers organizing!