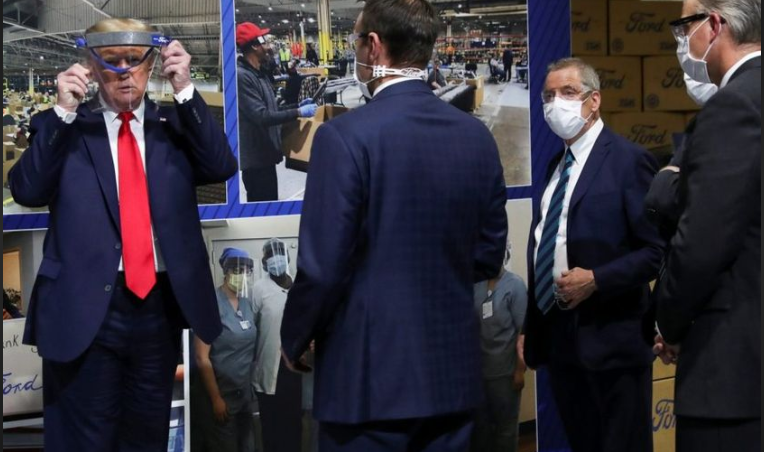 Closures could serve as a negative backdrop for Trump visit.

Just two days after reopening its U.S. and Canadian plants – and a day before hosting a visit by President Donald Trump – Ford briefly was forced to shutter two assembly lines when multiple workers were found to be suffering COVID-19 infections.

Crews immediately went to work at the factories in Chicago and Dearborn, Michigan, to disinfect the two lines but when Dearborn workers on the night shift returned Wednesday evening they initially refused to man their stations, TheDetroitBureau.com confirmed, protesting what some described as unsafe conditions.

A video from the plant showed employees milling in the aisles at the Dearborn facility while managers tried to coax them back to their stations. One worker told TheDetroitBureau.com that they were told they could be fired if the protest continued. That has not been independently verified.

(Auto workers worried about returning to plants during pandemic.)

Around 9 p.m., two hours after the shift was supposed to begin, a company spokesman confirmed that “it was a slow start but (the plant) is up and running now.” The company issued a formal statement to TheDetroitBureau.com shortly thereafter.

“Tonight, a small group of employees at Dearborn Truck Plant raised concerns after Ford communicated that an employee on an earlier shift had tested positive for COVID-19,” according to the statement.  “Following our global safety protocol, Ford had already thoroughly cleaned and disinfected the plant areas affected prior to the night shift. We talked with our employees to calm their fears and resumed production tonight.”

In all, Ford earlier confirmed that three workers tested positive for COVID-19, the disease caused by the coronavirus that has so far killed more than 90,000 Americans. That included two workers at the Chicago plant producing Ford’s popular Explorer SUV as well as the new Lincoln Aviator, a luxury version of the ute. A third was diagnosed at the Dearborn plant that produces the Ford F-150. The F-Series pickup is America’s best-selling vehicle and Ford’s most profitable product line.

That news threw a damper on what was supposed to be a major step forward for the Detroit Big Three carmakers and the American economy as a whole. Like the rest of the U.S. auto industry, they shut down in March as the nation went into lockdown to prevent the spread of the coronavirus. With every job on an assembly line creating an estimated seven to eight other jobs, the impact was measured in the millions, according to J.D. Power.

It has also resulted in massive losses for the industry. Ford lost about $2 billion during the first quarter and industry analysts estimate the deficit for the April-June quarter could run as high as $5 billion.

Getting auto plants back into production is the sort of high-profile move that backs up Trump’s push to restart the economy. But he will be visiting one of Ford’s smaller facilities during his visit to Michigan on Thursday, a plant in Rawsonville, another Detroit suburb, where the automaker has set up a line producing millions of the face masks needed by the nation’s first responders.

Even before the workers in Chicago and Dearborn were diagnosed with COVID-19, the presidential visit was proving to be a bit awkward for Ford. The automaker’s lengthy “playbook” for protecting workers requires everyone who enters one of its U.S. facilities to wear a mask. That was supposed to include even the president. But Trump has resisted wearing that sort of personal protection equipment during several recent tours, including one to another mask production plant. Ford earlier this week relented, indicating it would allow the president inside the Rawsonville plant, with or without a mask.

The infections at the two plants now raise concerns about whether any amount of preparation can keep workers entirely safe. Indeed, the head of the Toyota plant in Alabama acknowledged the likelihood that one or more workers would eventually be diagnosed with COVID-19 no matter how strict the precautions.

For now, Ford, like its Detroit and foreign-owned competitors, plans to continue ramping up operations. But it may now face renewed pressure from the United Auto Workers Union which had expressed unease as recently as last week, about whether members could safely return to work.

Michael Strong contributed to this story.