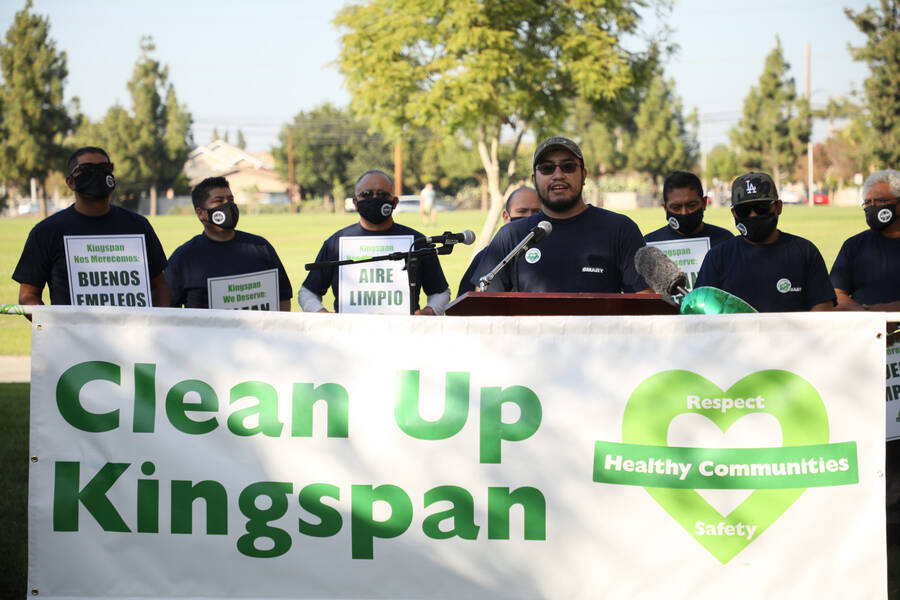 Above Photo: Kingspan welder, Lucas Hernandez, addresses a rally to “clean up Kingspan” in front of the Delhi community center in Santa Ana, Calif., on Nov. 10, 2021. Leo Blain.

As the acceptance of climate change becomes increasingly commonplace, more and more companies will be created or adapted to “fight” or “solve” it — or, at the very least, minimize its effects. Kingspan Group, which began as an engineering and contracting business in 1965 in Ireland, has since grown into a global company with more than 15,000 employees focused on green insulation and other sustainable building materials. Its mission is to “accelerate a zero emissions future with the wellbeing of people and planet at its heart.”

But workers at the Kingspan Light + Air factory in Santa Ana, Calif. don’t feel that the company has their wellbeing at its heart — and they say they have documented the indoor air pollution in their workplace to prove it. Differences between Kingspan’s mission and its true impact don’t stop there, workers charge: One of its products was used in the flammable cladding system on Grenfell Tower, a 24-floor public housing tower in London that went up in flames in June 2017, killing 72 people. Kingspan has been the target of protests in the United Kingdom and Ireland for its role in the disaster. Both Kingspan workers and survivors of the Grenfell Tower fire have called on the company to put public safety over profits.

Since the 1990s, union organizers say there have been multiple attempts from the International Association of Sheet Metal, Air, Rail and Transportation Workers (SMART) union to organize employees at Kingspan, but none were successful. The company says its North America branch employs “1,600 staff across 16 manufacturing and distribution facilities throughout the United States and Canada.” Workers at the Santa Ana plant are tasked with welding, spray painting and assembling fiberglass to produce energy-efficient skylights. During the pandemic, when workers say Covid-19 swept through the facility, employees reached back out to SMART — not just because they wanted to form a union, but because they grew concerned about what they say is poor air quality in the facility.

While SMART provided support for their campaign for clean air, the workers took control: In the summer of 2021, the Santa Ana workers came into work armed with monitors to measure indoor air pollution. Their goal was to measure airborne particulate matter that is 2.5 micrometers in diameter or smaller (PM 2.5). Such fine particulate matter constitutes a form of air pollution that is associated with health problems like respiratory and cardiovascular issues, along with increased mortality. The workers found that the average PM 2.5 concentration inside the facility was nearly seven times higher than outdoors. (To put that in perspective, wildfires usually result in a two- to four-fold increase in PM 2.5.) The majority of monitors found PM 2.5 levels that would rank between “unhealthy” and “very unhealthy” if measured outdoors, according to Environmental Protection Agency standards, the workers reported.

Because this is the air workers were breathing in for 40 hours per week, in October 2021, they went public with both their campaign to form a union and their fight for a safe workplace — a campaign that continues to this day.

According to Jorge Eufracio, a welder who’s worked at Kingspan for six years, “The campaign started for safety, better wages, and respect. We signed a petition for workers at Kingspan, and we had a delegation give it to the boss. The petition was about our whole campaign — including a fair process to organize.”

Kingspan employees told In These Times that management has ignored their plea for a fair process to organize, but in response to pressure has made some strides regarding health and safety, although the changes are inadequate. Jaime Ocotlan, a welder who’s been at the company for two years, said, “We have seen some small changes but we believe it’s not enough. They have given us some PPE, and recently they have started to give us some ear plugs. When they say they’re going to give us PPE, it needs to be fire safe. It’s not enough yet. It’s a band-aid. We need stuff that’s protective in the long run.”

Over Zoom, Ocotlan showed In These Times how shards of fiberglass get stuck in his work clothes, leaving small holes in the fabric and making it possible for the shards to reach his skin.

The workers have partnered with environmental justice organizations in order to pressure Kingspan to clean up the facility. An open letter signed by environmental groups in the Santa Ana area and nationwide states that “Kingspan is not an appropriate source for continuing education courses or sponsorships of events for the green building community, including those that touch on fire safety.” There are 45 signatories, led by the Labor Network for Sustainability, which brings together unions and union activists to fight for environmental justice.

A coalition of environmental activists and workers is coalescing. Both Eufracio and Ocotlan told In These Times that most workers at this Kingspan facility live in Santa Ana, and mentioned that one coworker lives directly behind the facility. Ocotlan said workers are concerned not only for themselves but “for the kids and the elderly. The contamination is something you can’t see but we breathe every day, and causes a lot of pulmonary problems.”

Ron Caudill, vice president of operations at Kingspan North America, told In These Times, “Kingspan has a long history of dedication to a safe working environment for all employees. In fact, as of today, it has been over 600 days since we had a lost time injury or illness, and we have never had an illness related to air quality.”

But workers at Kingspan are not only concerned with their own situation at work, or even at home: They’re also thinking of the victims of the Grenfell Tower fire. This past December, workers held a candlelight vigil in solidarity with a concurrent march in London to honor the 4.5 year anniversary of the fire. The British public inquiry into the fire found that Kingspan’s insulation product Kooltherm K15 was used in the cladding system on the Grenfell Tower. According to Kingspan, K15 only made up about 5% of the insulation layer of the system. But the U.K. government’s Grenfell Tower Inquiry unearthed a number of allegations concerning the company’s role in the fire, including the that workers kept secret the results of fire safety tests. Going forward, the government now demands that Kingspan and other insulation companies contribute a “significant portion” to the approximately £9 billion ($12 billion) in remediation costs.

Kingspan workers and victims of the Grenfell Tower fire are more than 5,000 miles apart, but they say they share a common interest: safety. Eufracio told In These Times, “We’re supporting Grenfell.”

He added, “We want to avoid what happened there.”