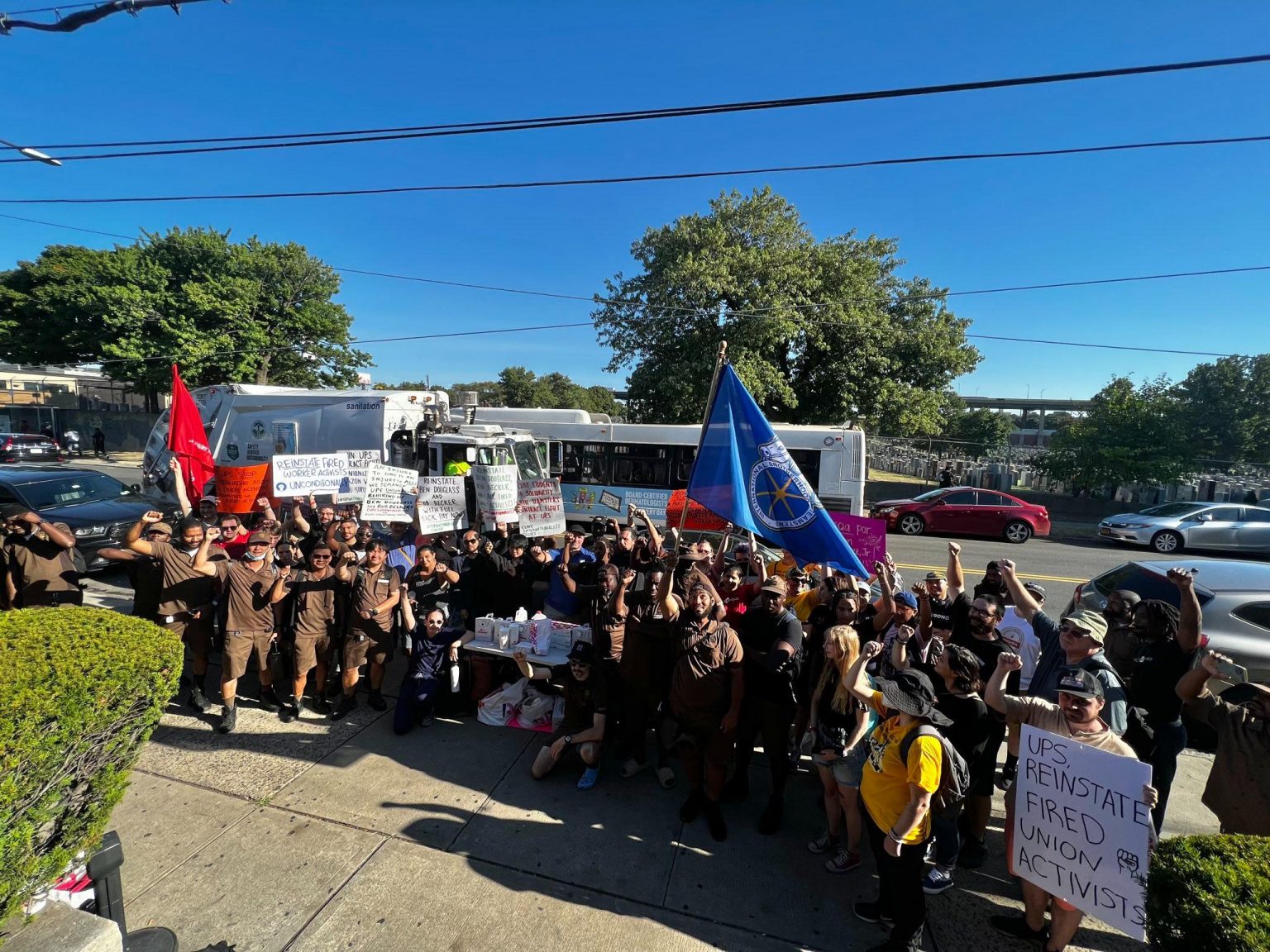 Workers Speak Out As UPS Continues Retaliation Against Union Activists

Demand the immediate and unconditional reinstatement of Ben Douglass and Rob Becker, both drivers and alternate shop stewards in New York State.

New York city, New York – Starting at 8:00 a.m. on September 1, workers and allies began to congregate at the steps of the Metro Queens UPS facility. The rally built on two-days of tabling, where dozens of coworkers posed for solidarity photos and encouraged coworkers to sign a petition defending “all fired activists.” Veterans of the 2014 ‘Maspeth 250’ wildcat strike, a struggle against the unjust firing of union militant Jairo Reyes, were quick to show their solidarity. So far, approximately 150 workers from the two Maspeth UPS buildings signed the petition, with plans in place to get many more signatures.

For a long time, UPS has encouraged management to harass and retaliate against worker-activists. Many who play a role in organizing among coworkers share stories of long disciplinary records that have followed them as management targets and hopes to make an example of them. In the lead-up to the 2023 contract negotiations between UPS and the International Brotherhood of Teamsters, UPS has only redoubled its efforts to intimidate and harass workers who speak up, or anyone who dares to assert their basic contractual guarantees. Douglass and Becker were fired on wholly illegitimate, bad faith grounds. Becker was accused of stopping for two minutes for an iced tea during a heat wave, while Douglass faces an array of flimsy accusations.

In defiance of the patently ridiculous charges levied against them, Douglass, along with many coworkers, have been putting forward a campaign to unconditionally reinstate unjustly fired workers and to challenge UPS harassment. The Thursday speak-out was energetic and militant with workers loudly booing district manager Andre Doorn and chanting, “What’s disgusting? Union busting!” Workers associated with Amazon Labor Union, Starbucks Workers United, Teamster Locals 404 of Massachusetts and 1150 of Connecticut, New York State Nurses Association, Professional Staff Congress, and Fordham Faculty United were amongst those present. Several speakers took the megaphone to demand UPS unconditionally reinstate the discharged workers and to denounce the company for its poor working conditions. The diverse group also issued generalized calls for a more united, fighting working class; an end to ALL union busting; and the rehiring of all unjustly fired activists.

Dan Arlin, a UPS worker and shop steward of Teamsters Local 404 who was also discharged due to retaliation, put matters succinctly: “They know they can’t win this case, but they don’t care […]. They’re using that as a fear tactic to tell all these young guys that are afraid to say something that if you stand up for yourself, that [sic] this is what’s going to happen.”

Jillian, a nurse at Wyckoff Hospital, empathetically relayed her experiences with treating workers who’ve suffered heat-related illnesses and shamed the self-absorbed managers standing watch above the rally for their condescending attitude in the face of workers’ suffering and anger. She encouraged workers to fight for themselves and stand up for each other in capacities outside of merely following a bureaucratic process, just awaiting one’s fate.

Towards the end of the rally, Douglass spoke on the power of workers standing united, and the conflicting interests of the bosses and workers: while management sits in air conditioned offices, workers like Estaban Chavez, Jr., who don’t have air conditioning or fans are dying and suffering from heat-related illnesses. Douglass also announced that the most egregious charges against him were dropped, and he is back to work with full back pay for the six days he was out. Although this is a small victory, he’s still facing a litany of other charges and remains on “notice of discharge”, the outcome of which will be decided by a judge during arbitration unless the company withdraws the charges.

Thursday’s rally is part of UPS Teamsters’ larger fight for better conditions. Decades of neoliberalism and concessions to the bosses have deteriorated the working conditions of UPS workers, as UPS has been able to deepen the exploitation of workers to extract more profits. Indeed, over the last years, UPS has made tens of billions in profits off the backs of the labor of workers like Douglass, Becker, and Arlin. From having drivers deliver excessive amounts of packages, surveilling workers, having longer routes instead of hiring more workers and dividing the work, to orchestrating more direct attacks on working conditions like creating a two-tier system that pays some drivers significantly less than others for the same work, UPS’s growth is predicated on the exploitation of workers. In the case of part-time package handlers, workers are often paid at or only barely above minimum wage and are constantly rushed. Part-timers in Local 804 are only guaranteed 3.5 hours of pay per working day, causing these workers to lead ever more financially precarious lives. They work under grueling conditions, damaging their bodies, and are constantly being replaced by new workers due to high turnover.

But UPS Teamsters are mounting a fight back. Considering their current contract expires in 2023, they have launched the campaign for a new, greatly improved contract, demanding the elimination of the two-tier system, a living wage for part-time workers, and air-conditioning in trucks, among other demands. As this contract fight heats up, UPS will continue to harass and retaliate against workers who dare to speak up, all with the goal of creating an atmosphere of fear in the workplace and weakening the power of the union. UPS is not unique in their greed and retaliation against organizers, either. Amazon, Trader Joe’s, Starbucks, and capitalists of all stripes have historically repressed worker organizing and made as few concessions as possible.

Whether UPS workers are in a contract fight or not, it is wholly unacceptable that management targets and harasses those who dare to speak up for better conditions. That management uses the smallest mistakes as a technicality to retaliate against workers should be denounced. Every worker should be able to work safely and have security in their work.

The capitalist class is united in its attack against the working class. It is essential workers unite as a class and fight back. We as workers have the power to bring the economy to a grinding halt until we get what we want. To do so, we as a class must overcome our divisions — e.g., racial, gender, national, sexual orientation, physical ability, and trade — so we can have greater say in the expenditure of our created value, enjoy a larger proportion of the fruits of our labor, and fight for control over our own lives.