Workers Strike Back From Boston To Chicago

Above photo: A crowd of about 350 protesters stand on Broadway in front of a McDonald’s restaurant, Tuesday, Nov. 29, 2016, in New York. About 25 of the chanting minimum-wage protesters, foreground, were arrested. The event was part of the National Day of Action to Fight for $15. The campaign seeks higher hourly wages, including for workers at fast-food restaurants and airports. Mark Lennihan AP Photo/The Herald

Home Care, Child Care, Higher Education Workers to Join Tens of Thousands in Streets to Show They Won’t Back Down Following Election Defined by Frustration with Rigged Economy 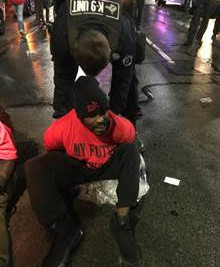 NATIONWIDE – Strikes by baggage handlers and cabin cleaners at Chicago O’Hare International Airport, Uber drivers in two-dozen cities, hospital workers in Pittsburgh and McDonald’s and other fast-food cooks and cashiers from coast to coast, combined with mass civil disobedience by working Americans across the service economy, will headline a nationwide Fight for $15 day of disruption Tuesday.

In addition to the strikes demanding $15 and union rights, the workers will wage their most disruptive protests yet to show they will not back down in the face of newly-elected politicians and newly-empowered corporate special interests who threaten an extremist agenda to move the country to the right. The protests, at 20 major airports, which serve 2 million passengers a day, and outside McDonald’s restaurants from Durham to Denver, will underscore that any efforts to block wage increases, gut workers’ rights or healthcare, deport immigrants, or support racism or racist policies, will be met with unrelenting opposition by workers in the Fight for $15.

Galvanized by the election and frustrated with an economy that is rigged for the rich, airport, fast-food, home care, higher education and child care workers organized the massive demonstrations to mark the fourth anniversary of the Fight for $15, a movement that has won raises for 22 million Americans since it started in 2012.

McDonald’s will also be on the hot seat overseas Tuesday, as the European Parliament holds a hearing on petitions from British, Belgian and French unions on mistreatment of the burger giant’s workers across the continent. 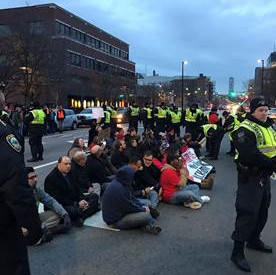 BREAKING: Fast-food, airport and Uber workers were arrested outside of McDonald’s restaurants from New York to Chicago early Tuesday, kicking off the Fight for $15’s most disruptive day of strikes and protests since the movement started four years ago to the day.

In Detroit, dozens of workers wearing shirts that read, “My Future is My Freedom” linked arms in front of a McDonald’s and sat down in the street.  As they were handcuffed, hundreds of supporters chanted, “No Justice, No Peace.”

In Manhattan’s Financial District, dozens of fast-food and airport workers placed a banner reading “We Won’t Back Down” on the street in front of a McDonald’s on Broadway and a sat down in a circle, blocking traffic, until they were hauled away by police officers. Councilmembers Brad Lander, Mark Levine and Antonio Reynoso and State Assembly Member Francisco Moya were arrested while supporting the workers.

In Cambridge, dozens of workers and elected leaders were arrested for blocking the street outside a McDonald’s on Massachusetts Avenue.