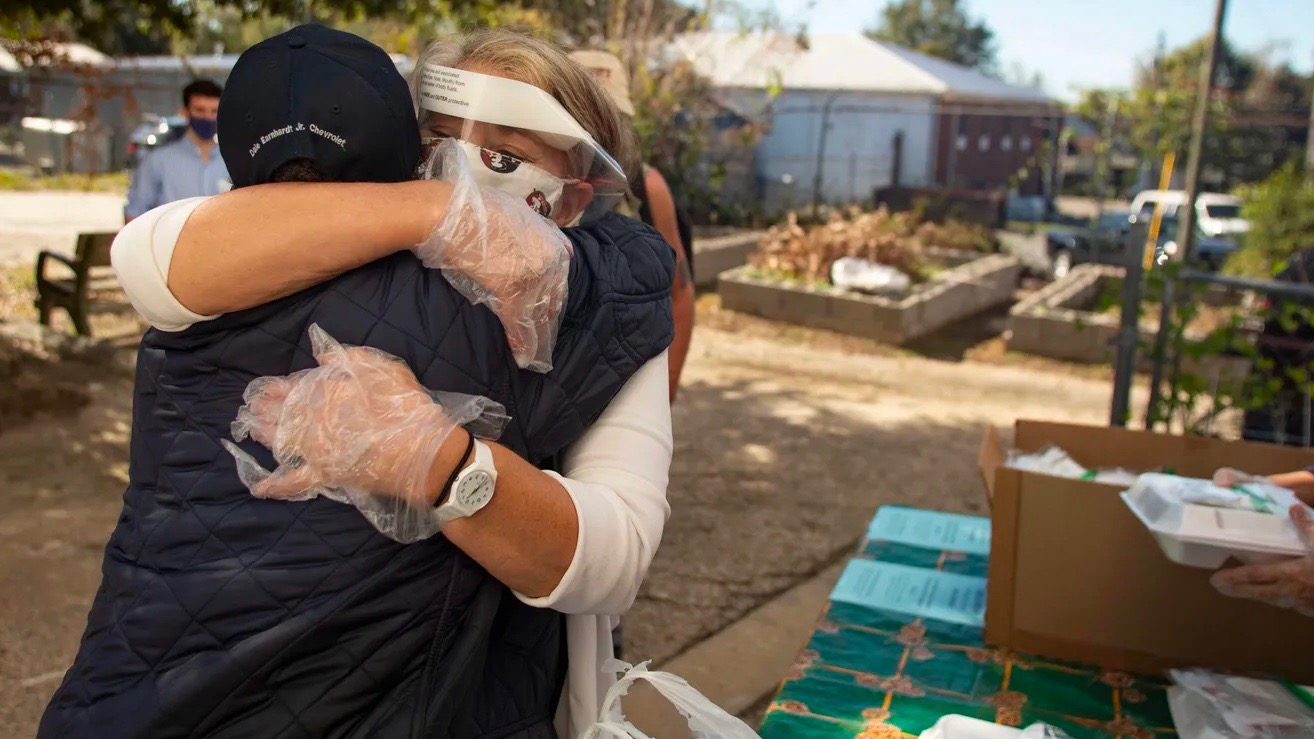 Above photo: Woman hugs a friend who came to pick up food from the church food bank in Tallahassee, Florida. Food banks have been overwhelmed since the beginning of the pandemic, Feeding America calculates that around 50 million in the US experience food insecurity. Alicia Devine/Tallahassee Democrat.

As the COVID-19 pandemic spirals out of control in the United States, inaction and deadlock in the government have left workers to fend for themselves amid mounting unemployment.

Not only has the coronavirus pandemic taken a staggering toll in terms of loss of life in the United States but has also caused social and economic dislocation for the working class on a massive scale. The impact of this crisis is likely to last far beyond the distribution of a vaccine.

When the pandemic began to spiral out of control in March, Will Harris was one of the millions of retail workers who lost their income. Harris, who worked two part-time jobs, said that as the months of unemployment dragged on, “I couldn’t afford all my groceries when I needed them… I felt bad for spending on anything even if it was absolutely essential,” and he had to start rationing medical treatments like testosterone.

Between his employers and the government, assistance was minimal or nonexistent. “I got the first stimulus check for $1,200 but that only lasted me a week or two. I was asking for money from friends and was fortunate enough to be able to find help, but not everyone has that luxury,” recalled Harris. He was able to return to work at one of his jobs in August, but it was impossible for him to return to his other job with the multibillion-dollar department store chain Ross because of the company’s lack of adequate communication over health precautions.

Ted Kelly, an organizer with the Philadelphia Unemployment Project (PUP), said, “Put simply, the US federal government has completely failed the working class during this crisis.” In response, PUP “has formed an organizing group of unemployed workers that we’re calling the unemployed organizing committee. These are people who have not necessarily been activists or organizers before they lost their jobs [during the pandemic] but who have been inspired to take action by the tremendous failure of the state to help take care of workers’ needs,” added Kelly.

The ultra-rich, on the other hand, are doing just fine. Between the beginning of the pandemic in March and the end of July, US billionaires managed to increase their total net worth by $637 billion. Stock indexes hit record highs over the summer, and the job market for higher-paid professionals had fully recovered by then, according to an August report by the Washington Post. And in a single day in July, Jeff Bezos—the richest person on the planet—made $13 billion.

“Inequality was already at historic levels before the pandemic,” noted Karla Martin, a member of the board of directors of the pro-labor advocacy group Working Families Partnership, “but coronavirus has pushed the gap between the rich and the poor to unthinkable levels.”

Deadlock in Washington Over Relief Bill

One of the clearest examples of the US elite’s complete indifference to the plight of tens of millions of unemployed workers is the inaction of the US Congress as “Republicans and Democrats remain deadlocked on the new package all of them claim to want,” stated a December 11 editorial in the Washington Post. After passing emergency legislation in the spring, when the virus first hit—which included a bailout package for big banks and corporations about the size of the economy of Germany, which has a $4 trillion GDP—the US Congress has done essentially nothing to relieve the immense suffering of the poor and working-class people.

For months, people have been anxiously awaiting new stimulus package measures being crafted by Congress. Perhaps the most closely watched element of the negotiations between legislators is the relief for the unemployed. A renewal or replacement is desperately needed for the Federal Pandemic Unemployment Compensation (FPUC) program, a $600 per week enhancement to existing unemployment benefits that was passed in March but expired in August. “The enhanced payments to unemployed workers was an absolutely vital lifeline—in many cases [it was] the only thing allowing families to meet their most basic needs,” explained Martin.

Kelly holds both major parties responsible for its demise. “Instead of extending and expanding FPUC, both the Democrats and Republicans allowed that program to expire at the end of July and left Washington before implementing a new program.”

The Democratic Party controls the House of Representatives, one of two chambers of the US legislature. In May, they passed a bill that would enact a series of stimulus measures totaling $3 trillion. A majority in the Senate, controlled by the right-wing Republican Party, passed their own bill in September that funds approximately $500 billion worth of programs. The Republican bill would cut FPUC in half and give companies a large degree of legal immunity from lawsuits filed by their employees over unsafe working conditions. These measures have primarily been financed through the unique ability of the US treasury to print dollars, pushing the federal government’s budget deficit for 2020 alone to $3.3 trillion.

To come into force, a bill must be passed by both the House and the Senate, and then be signed by President Trump. The Democratic Party has taken a formal position in favor of an extension of enhanced unemployment benefits, but they have taken no serious steps to place the kind of pressure necessary on Republicans in the Senate to force the passage of a bill ensuring such benefits. And many of the programs that social movements have been demanding are not even under consideration by either party. “What workers really need are moratoria on rent, mortgage, and utility payments. Bills are stacking up and the cost of living was too high even before COVID,” Kelly said.

As the political system grapples with even greater turmoil in the aftermath of the November presidential election, prospects for a major relief package addressing these urgent needs are becoming even dimmer. With the death toll in the United States climbing rapidly amid a new wave of COVID-19 infections, the pressure will be immense to act swiftly when a new Congress convenes in January 2021.

Walter Smolarek is a Philadelphia-based journalist and activist, covering both political developments inside the United States as well as the international activities of U.S. imperialism. Since becoming involved in the movement against the Iraq War as a high school student, he has also participated as an organizer in social movements ranging from Occupy Wall Street in 2011 to the 2014-2015 wave of the Black Lives Matter movement and ongoing mutual aid relief efforts in the face of the coronavirus pandemic. He is a contributor to BreakThrough News, currently serves as the editor of Liberation newspaper, and is the managing editor of LiberationNews.org. He is a Globetrotter/Peoples Dispatch fellow.