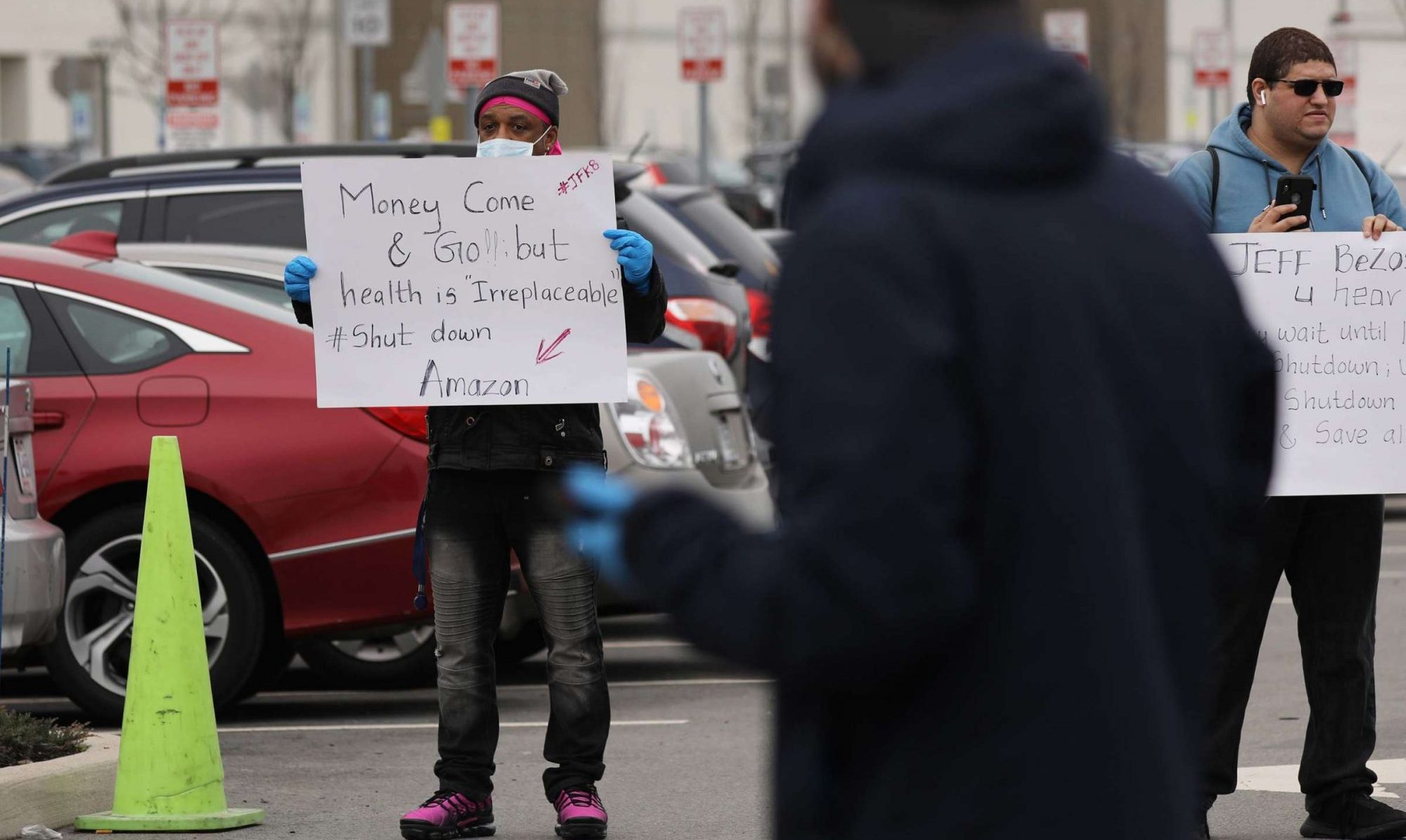 Essential workers at Instacart, Whole Foods, Amazon and General Electric are staging protests and walking off the job in droves across the U.S., demanding increased protections and pay as they continue to face disproportionate risks and increasingly perilous working conditions amid the COVID-19 pandemic.

Thousands of workers for the San Francisco-based Instacart, a popular U.S. grocery delivery service app, went on strike Monday for better pay and health protections as they face soaring demand to deliver groceries and other essentials to people on lockdown amid shelter-in-place orders.

As Instacart orders in many parts of the country are backed up by as much as a week as demand has spiked, many of the company’s full-service shoppers — who are classified as independent contractors — say they are not being provided with adequate paid sick measures, hazard pay or supplies to meet challenging delivery schedules while staying safe.

The strike is “not coming from a place of greed, or even wanting to stick it to the company at this point. It has everything to do with wanting our health and well-being to be valued,” says Robin Pape, an Instacart shopper with the group organizing the strike effort, Gig Workers Collective.

Even before the pandemic, Pape told Truthout that longtime Instacart shoppers were struggling with larger and larger and increasingly combined orders. As the pandemic bore down, workers faced increased delays as grocery store supplies dwindled, and they had to correspond with customers regarding substitutions for certain items.

“When you’re shopping for three different customers and each of them has 15 items out of stock, it becomes far more time-consuming, so our hourly rates go down because it’s taking us much longer to complete a shop than it would have if we weren’t waiting for customers to respond and having to send pictures of what’s available,” Pape says.

On top of that, Instacart gig workers face increased risk of exposure to COVID-19 on the job, touching frequently used carts in grocery stores that may not have implemented any physical distancing guidelines. Worse still, shoppers fear they could be passing contaminated items like plastic bags and food items on to their customers. It’s why Instacart workers have also demanded supplies of hand sanitizers and disinfectant wipes from the company.

In fact, according to the Gig Workers Collective, Instacart is already quietly informing shoppers that some workers have already been infected with COVID-19. Instacart corporate sent one shopper in Cambridge, Massachusetts, an email regarding a confirmed case of an Instacart worker with COVID-19 at a grocery store there.

In the weeks before the strike, Instacart did institute 14 days of paid time off for shoppers who test positive for COVID-19 or are placed under mandatory quarantine, but Gig Workers Collective wants to see that expanded beyond 14 days and not be contingent upon a positive test. Additionally, the company is also offering a new bonus based on shoppers’ performance.

Instacart executives said in a statement that the strike of its contractors had “absolutely no impact to Instacart’s operations,” and that the company had hired 40 percent more shoppers on Monday than the platform had hired last Monday, and sold more groceries over the weekend than ever before. The company plans to hire 300,000 gig workers in the coming weeks to meet its increased demand.

Pape said that while the company agreed to meet workers’ demands for hand sanitizer, many workers have been unable to receive a bottle after requesting one. She says the company hasn’t met with the Gig Workers Collective or even acknowledged the walkout until it happened.

Pape stresses that the company will need its veteran shoppers to help orient the new gig workers it is planning to bring on, and that, even while the company’s profits have soared, its level of complaints on public and private platforms have skyrocketed in tandem. Many longtime shoppers, including Pape herself, are already planning on moving to other platforms.

“They may be able to replace some of us, but the quality of the shops is going to go down considerably, and customers are going to be increasingly dissatisfied with what they’re getting,” Pape told Truthout.

The group has been pushing for better pay and basic benefits like health care even before the COVID-19 pandemic struck, saying Instacart workers have been wrongly categorized as independent contractors. A San Diego judge issued a preliminary injunction in February, ruling that Instacart’s California-based shoppers should likely be categorized as employees under the state’s Assembly Bill 5.

Instacart workers were joined by up to 50 Amazon workers at a warehouse in Staten Island, New York, who also walked off the job Monday in protest of the company’s paid sick leave policies and its decision to keep the warehouse open even after one employee there was diagnosed with COVID-19. The company has reported that employees in at least 19 Amazon warehouse and shipping facilities across the U.S. have tested positive for COVID-19.

The company said it fired an employee, Chris Smalls, who helped organize the strike, alleging that he violated his employment by leaving a paid quarantine to participate in the action. In response, New York’s attorney general issued a statement calling the firing “disgraceful,” asking the National Labor Relations Board to investigate while saying her office was “considering all legal options.”

The campaign is being led by a grassroots group of Whole Foods workers called Whole Worker, which organized an online petition with 10,000 signatures Monday night. Like Instacart, Whole Foods has only promised its workers two weeks of sick leave with proof of a positive COVID-19 test, and has offered a $2 hourly wage increase through April. In January, the company cut health care benefits for 1,900 of its part-time workers.

But workers aren’t just protesting for better pay and working conditions. Some are demanding that companies better utilize their resources to help the national effort to combat the pandemic. Workers at two separate General Electric (GE) factories want the company to convert its jet engine factories to instead make ventilators as medical workers face dire shortages. The company’s health care division is already one of the largest manufacturers of ventilators in the nation.

The demands were launched at GE’s Lynn, Massachusetts, aviation facility and its Boston headquarters, where union members with the Industrial Division of the Communication Workers of America (IUE-CWA) protested while standing or marching six feet apart.

The protests came after the company announced it plans to lay off 10 percent of its domestic aviation workforce, firing nearly 2,600 workers, along with a “temporary” layoff of 50 percent of its maintenance workers.

IUE-CWA President Carl Kennebrew told Truthout that the union’s shops have already been hit hard by layoffs and closures prior to the pandemic. “All of our facilities have this base capacity to make these ventilators, and that’s what we’re asking. It would be easy for GE to … work in-house,” Kennebrew said.

Kennebrew and Jerry Carney, who is IUE-CWA’s GE conference board chairman, told Truthout that President Trump wouldn’t even need to invoke the Defense Production Act to compel companies to produce much-needed medical supplies if companies like GE and others took it upon themselves to step up production capacity in the first place. Trump recently called on General Motors to produce ventilators and could similarly call on GE to increase its production.

Carney criticized GE’s contracts with outside producers, saying the company wasted time in drawing up confidentiality clauses and other legal measures in contracts when it could have just forged ahead with producing supplies at its own factories weeks ago. “We could be doing that work right now, right in the United States, and take back what we used to have in manufacturing for the world.”

Congress’s $2 trillion economic stimulus bill includes $17 billion for assistance to companies deemed crucial to national security, including potentially GE. The company is set to receive even more assistance from the corporate bailout, which also dedicates at least $50 billion to the aerospace industry and another $25 billion in loans and tax cuts. Carney, however, noted that the bill doesn’t include protections or assistance for GE workers who need to stay home with children as schools and daycares remain closed.

The company told VICE that while it has already ramped up ventilator production in its Madison, Wisconsin, factory, it must consider the needs of its other clients, including the U.S. military, before changing production at particular factories. The company told VICE in a statement that it is continuing “to explore additional opportunities to support the fight against COVID-19, while continuing to support mission-critical work for our customers as well.”

Workers at Instacart, Whole Foods, Amazon and GE join other mass labor actions that have touched off since the start of the pandemic, including a walkout of a Perdue chicken plant; a strike by bus drivers in Birmingham, Alabama; a walkout by workers at a Fiat-Chrysler plant in Sterling Falls, Michigan; a threatened walkout by longshore workers in the Bay Area; grievances filed as well as a letter sent to the Pennsylvania governor by UPS workers in Philadelphia; and protests by city sanitation workers in Pittsburgh.

Unions and workers are winning some of these battles. United Food and Commercial Workers (UFCW) announced a deal Wednesday with Kroger to increase pay and benefits, including a $2 per hour wage increase, additional emergency paid leave and new workplace safety measures, for the company’s more than 460,000 workers across the country.

“[Wednesday’s] increase in pay and benefits is a good first step in our ongoing conversations with Kroger to keep customers and workers safe in stores during this crisis,” said UFCW International President Marc Perrone.

This week’s strike wave echoes the historic mass labor actions that took place just over 100 years ago after another pandemic — known then as “Spanish flu” — ravaged the U.S. economy and the world. As millions died between 1918 and 1920, workers organized strikes across major industries, including the nationwide 1919 Steel Strike and a coal miners’ strike in Seattle, Washington, that captured the city for a week. That year, 4 million workers walked off the job in the U.S.

Calls for a new massive general strike are again surfacing as workers recognize the need to force corporations and state and federal governments to implement sweeping changes, including wealth redistribution and a guaranteed right to health care, housing and jobs.

This week’s mass labor actions add to that momentum, underscoring not only the increasing precarity of the gig economy, but also how workers who have long been under-valued in the economy are now proving critical even as the nation’s unemployment rate has been projected to rise as high as 20 percent as the pandemic’s grip tightens.

“Right now, we’re being touted as ‘household heroes’ and the one thing that’s allowing so many people to socially isolate, since they have all these workers who are willing to take on the risk for them,” Gig Workers Collective’s Pape says. “Laborers who have been performing these jobs with no recognition, no thank you, no respect for the positions they’ve chosen to fill or have had to fill, are finally fed up.”

Candice Bernd is senior editor/staff reporter at Truthout. Her work has also appeared in several other publications, including The Nation, In These Times, the Texas Observer, Salon, Rewire.News, Sludge, YES! Magazine and Earth Island Journal. Her work has received awards from the San Francisco Press Club, the Fort Worth chapter of Society of Professional Journalists, the Native American Journalists Association, and the Dallas Peace and Justice Center. Follow her on Twitter: @CandiceBernd.