Above: The Tufts Community Union passed a resolution calling on the president and Board of Trustees to divest from fossil fuels. (GoFossilFree.org).

Depending on where you are in the world, there might still be time to make it to a Global Divestment Day event — click here to find one near you.

From a blockade at the International Petroleum Conference in London to hundreds of people dumping their dirty banks on the same day in Australia, the photos and videos are already pouring in from our friends on the other side of the globe. Click here to see (and share!) some of today’s early photos on Facebook: 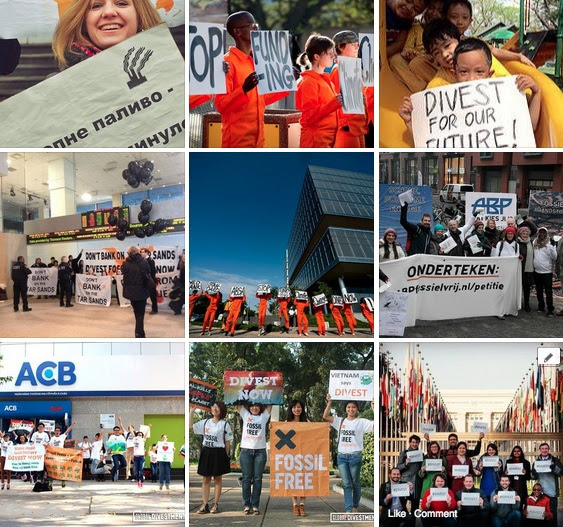 Even if you’re following along from home today, you can be part of this moment and this movement — here’s how:

Today, right now, the world is standing in a window of opportunity. Right now, the fossil fuel industry is on the defensive — from fracking bans, to the President’s renewed pledge to veto the Keystone XL bill, to a fossil fuel divestment movement that is truly hitting its stride.

Today we’re demonstrating that there are thousands of people around the world who know that fossil fuel divestment is both the smart thing to do and the right thing — and those people are willing to take action in their own communities. We know that if it’s wrong to wreck the climate, then it’s wrong to profit from that wreckage.

Earlier this week, the fossil fuel industry launched a concerted counter-attack on the divestment movement, only to have their efforts fall rather flat. This (perhaps apocryphal) Gandhi quote feels more apt than ever: “First they ignore you, then they laugh at you, then they fight you, then you win.”

Let’s show the world that we’ve got the guts, the heart, and the numbers to win against the power and money of the industry driving the climate crisis.