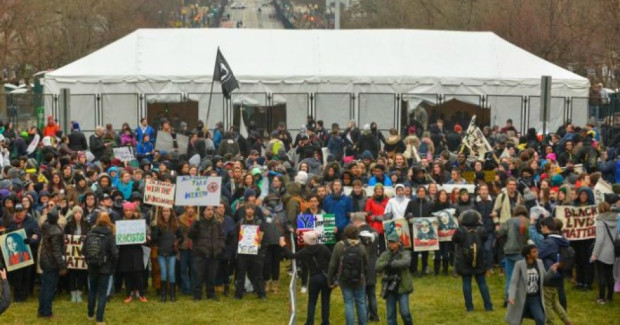 World Erupts In Revulsion As Trump Becomes 45th US President

Amid growing protests and vows of resistance to his right-wing agenda and regressive vitriol, Donald J. Trump was sworn into office on Friday as the 45th President of the United States.

In anticipation of a day that will likely embody the #NotNormal nature of his campaign and transition period, Commons Dreams will be providing live coverage of events in Washington, D.C. as well as updates and reactions from around the nation and the world as Trump’s inauguration unfolds. Check back for updates.

Trump’s Hour One “Punch in the Gut to Middle Class”

One of President Donald Trump’s first orders of business was to make homeownership more expensive for first-time and low-to-middle-income borrowers. About an hour after he was sworn in, the Department of Housing and Urban Development announced it was suspending indefinitely a pending cut to mortgage insurance premiums. The move was decried as “a windfall for Wall Street” that contradicts Trump’s populist rhetoric. Read Common Dreams’ coverage here.

The government watchdog group Citizens for Ethics and Responsibility in Washington (CREW) says Trump is already in violation of the Constitution. CREW filed a complaint Friday noting that the lease on Trump International Hotel, which is in the federally-owned Old Post Office building in Washington, D.C., prohibits elected officials from receiving “any share or part of [the Lease], or to any benefit that may arise therefrom.”

Meanwhile, during the inaugural parade on Friday, the new President reportedly only walked for the stretch of the route that passed the controversial Trump International.

Trump and First Lady wave to employers of Trump Hotel cheering as he approaches pic.twitter.com/jOOjVWlVrm

So CNN don’t even call out the conflict of interest of Trump stopping the parade to walk in front of his Trump hotel? #TrumpInauguration

The new administration’s official White House web page went up shortly after Trump was sworn in, with one aspect of the overhaul gaining lots of media attention on Friday—the absence of climate change. While the Obama administration’s White House page listed climate as a top issue, the Trump site lists America First Energy Plan which calls for no climate actions but rather a call to embrace the fracking revolution and so-called clean coal.

350.org executive director May Boeve said, “This is not a plan for a brighter future—it’s a direct obstacle to a livable future, and we will do everything we can to resist it.”

During his inaugural address, President Donald Trump described the nation’s public schools as “an education system flush with cash but which leaves our young and beautiful students deprived of all knowledge.”

In response, the 59,000-member Badass Teachers Association wrote on its Facebook page:

This is what our new President thinks of our public schools.

That teachers and schools are rolling in dough, work in spacious facilities, and want for nothing—yet we are so bad at our jobs that our students know nothing.

Because I’m trying to remain professional, I’ll refrain from saying the words I want to say.

But I will say that these comments are ignorant, hurtful, and divisive.

He had a chance to use this address to unite a fractured nation, and appeal to our better selves, and chose to insult and disparage a profession of which he knows nothing.

It’s not our schools that are flush with cash yet know nothing.

Women Not Having Trump’s Cabinet

Hundreds of women—Black, Latino, climate justice activists, veterans, and members of the Dakota Access Pipeline (DAPL) resistance—rallied outside of key federal offices on Friday morning to protest the threat to homes and environment posed by the incoming Trump administration.

“The appointments of Rick Perry, Steve Mnuchin, and Ben Carson make clear the Trump administration’s intention to ramp up the exploitation of land for private profit, wreaking devastation for the climate, for our water, and for our homes,” read the statement from Grassroots Global Justice Alliance, which organized the #ItTakesRoots actions.

“Mnuchin, Carson, and Trump together will threaten the homes of both homeowners and renters,” the statement continued. “Mnuchin is known as the ‘foreclosure king’ for the over 36,000 foreclosures he instigated during the financial crisis. With half of all renters facing unaffordable rents and evictions at all-time highs, Carson has stated that he plans to turn public housing over to private interests, which will only worsen the displacement and affordable housing crises faced by communities around the country. ”

At the same time, the group notes, Energy secretary nominee Rick Perry “until a week ago…was on the Board of the company driving the Dakota Access Pipeline, which threatened the water of 17 million people.”

#ittakesroots out here @ dept of energy to protect & resist liberation and justice 4 all #grassrootsfeminism pic.twitter.com/MkGj3qoJy6

The Streets of Washington, D.C.

Roving protests, mass arrests, and civil disobedience appear to be overtaking the streets of the nation’s capital in the hours surrounding the inauguration ceremony.

Demonstrations aiming to disrupt the inauguration of Donald Trump that have been gaining momentum since early Friday morning have shut down streets, and barricaded security checkpoints, under the umbrella of the anti-inaugural coalition “Disrupt J20.”

One of many roving protests at #TrumpInauguration outside checkpoint at US District Courthouse. #McPherson #DisruptJ20 pic.twitter.com/yoeHISzQOM

“Trump thinks he runs this town? Pussy’s gonna SHUT HIM DOWN!”

An Authoritarian Takes Office Donald Trump on Friday began his presidency with a speech laden with promises of bringing back “our jobs”, “our borders”, and “our wealth,” along with vows to tackle what he described as “American carnage,” stirring fears among the president’s opponents who called attention to a campaign built on xenophobia, racism, and Islamophobia—and a cabinet that belies his promise to “drain the swamp” of special interests. Read Common Dreams’ coverage here. Fear of Trump Spreads Worldwide Protests are swelling around the world as people unite in opposition to Trump’s right-wing agenda.

Meanwhile, activists calling for an end to “Trump’s Arms Race” rallied outside the U.S. embassy in London on Friday.

“Donald Trump has sparked fear across the world with a series of provocative statements,” said Kate Hudson, general secretary of the Coalition for Nuclear Disarmament in a press statemetn ahead of the demonstration.

“He has called for the expansion of the U.S. nuclear capability, the tearing up of the Iran nuclear deal, and he appeared to welcome a possible arms race in Asia,” she continued. “These are not the worlds of a president looking to build peace in the world. It’s absolutely essential that civil society responds.”

“Our government,” Hudson said, “should respond to this emerging threat by supporting negotiations at the United Nations in 2017 for a global nuclear ban. Britain needs to lead through example, not blind support for the policy whims of the U.S. president.”

Watch a video of the demonstration below:

LIVE: As the US swears in it’s 45th President, an anti-Donald Trump protest reaches the US embassy as #Inauguration pic.twitter.com/1rRWKxkAnE

Shutdown San Francisco In San Francisco, hours before the oath of office, anti-Trump protesters linked arms across commuter rail tracks and blocked trains from getting by.

Terrible Turnout for Trump Given Trump’s fixation on winning ratings and “bigly” crowds at his events, the overhead visual at Friday’s inauguration was sure to be an embarrassment for the newly sworn-in president:

Protesting at the Gates While America’s eyes were glued to the inauguration ceremony, protesters have been flooding the streets of Washington, D.C., focusing actions at the various security checkpoints around the perimeter of the event. Documenting some of the demonstrations from the street is Intercept journalist Jeremy Scahill, who streamed the below video shortly before Donald Trump was declared President of the United States.

Sanders’ Words of Wisdom Sen. Bernie Sanders offered this message of encouragement and vision early Friday for those Americans who were mourning the presidential inauguration of Donald Trump. “Today is going to be a tough day for millions of Americans, including myself,” he said in a video shared on his Twitter feed. But our response has got to be not to throw up our hands in despair, not to give up, but to fight back as effectively and vigorously as we can. “And our job is to keep our eyes on the prize,” he continued. “And the prize is that we will continue fighting for a government that represents all of us and not just the one percent. And we are going to go forward in the fight for economic, social, environmental, and racial justice. That’s who we are. That’s what we are going to do. We are not giving up.”

Today will be a tough day, but we can’t throw up our hands in despair. We have to fight back. We are not giving up. pic.twitter.com/y3lJf9wzEq

Democracy Now! is streaming a special broadcast until 3PM on Inauguration Day, offering a panel of guests including author, activist and assistant professor at the Center for African American Studies at Princeton University Keeanga-Yamahtta Taylor; author and activist Naomi Klein, and investigative journalist Allan Nairn. Click here to watch their ongoing analysis.