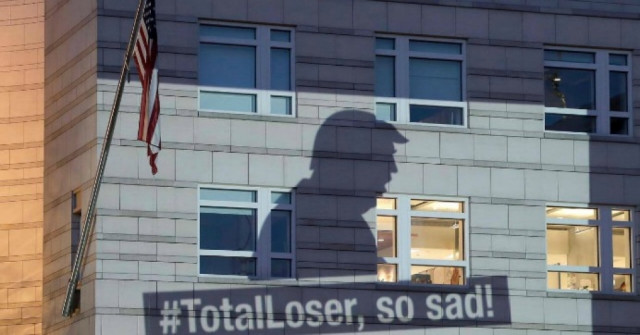 World Leaders To Trump: You’re On Your Own

Above photo: Greenpeace activists in Berlin, Germany responded to news of the U.S. withdrawal from the Paris climate agreement by projecting an image of President Donald Trump on the U.S. Embassy on Thursday. (Photo: Michael Sohn/DPA)

The overwhelming global response to President Donald Trump’s decision to pull the U.S. out of the Paris climate agreement was essentially, “Go jump in a lake”—or as one Germany tabloid succinctly phrased it in a widely circulated headline:

Very much enjoying the German press at the moment. “Earth to Trump…” pic.twitter.com/sPqkUPYVlw

Following Trump’s Thursday announcement, world leaders from China to Germany to the Marshall Islands and beyond promised to uphold the climate accord while citizens and civil society from across the globe vowed to “harness public outrage into meaningful on-the-ground action” to combat the crisis of climate change.

German Chancellor Angela Merkel told reporters on Friday that European leaders “will band together to take more decisive action than ever to confront and successfully surmount major challenges to humanity such as climate change.” Merkel called Trump’s withdrawal “highly regrettable, to put it very mildly,” but added: “This decision cannot and will not stop those of us who feel obligated to protect our earth.”

Newly elected French President Emmanuel Macron similarly reiterated his country’s commitment to climate action, and extended an invitation to “all scientists, engineers, entrepreneurs, responsible citizens who were disappointed by the decision of the United States,” saying: “I want to say that they will find in France a second homeland.”

Merkel, Macron and Italian Prime Minister Paolo Gentiloni also immediately issued a statement Thursday making clear that “the Paris Agreement cannot be renegotiated, since it is a vital instrument for our planet, societies and economies,” rejecting Trump’s assertion that he would try to broker new terms for the accord. Later, Macron took to Twitter to highlight Trump’s divisive “America first” rhetoric, which the U.S president employed to falsely justify the withdrawal.

Nations already experiencing some of the more dramatic effects of global warming, including fierce storms and rising seas, were also quick to condemn the move.

“Today’s decision is not only disappointing, but also highly concerning for those of us that live on the frontline of climate change,” said Marshall Islands President Dr. Hilda Heine. While the U.S.’s withdrawal “will have grave impacts,” she continued, “it is not too late to act. We must not give up hope. Our children and their children deserve not only to survive, they deserve to thrive. That is why the rest of the world remains firmly committed to the Paris Agreement, and our own commitment to it—and that of our wider Pacific family—will never waver.”

The government of South Africa issued a statement Friday expressing its “profound regret” over Trump’s decision, noting that the U.S. stands alone in its denial of the crisis, which it has largely worsened with decades of industrial growth and excessive consumption, “and therefore has a moral obligation not only to lead in reducing emissions, but to support poorer economies in contributing to the global effort.”

“The international community regards climate change as the single biggest threat to well-being, health and socio-economic development facing humanity this century,” the statement continues. “Its impacts are widespread, unprecedented and disproportionately burdens to the poorest and most vulnerable.”

Speaking on behalf of the Chinese government, which many observers noted would benefit from the failure of climate leadership and innovation from the U.S., foreign ministry spokeswoman Hua Chunying also promised to “earnestly implement our obligations” to the Paris agreement, saying it is a “responsibility shouldered by China as a responsible major country.”

In the U.S., many city and state officials made clear that the position of the federal government did not represent the majority of American opinion and promised to continue reducing their fossil fuel footprint, with or without support from Trump.

The governors of California, New York and Washington state on Thursday announced the formation of the U.S. Climate Alliance, which would continue to uphold the target, set forth by the Obama administration, to reduce emissions 26 to 28 percent from 2005 levels.

“We governors are going to step into this cockpit and fly the plane,” Washington Gov. Jay Inslee told reporters. “The president wants to ground it—we’re going to fly it.”

Meanwhile, the New York Times reported that a growing coalition of U.S. government, academic and business leaders are “preparing to submit a plan to the United Nations pledging to meet the United States’ greenhouse gas emissions targets under the Paris climate accord.” So far, the pact includes “30 mayors, three governors, more than 80 university presidents and more than 100 businesses.”

The outpouring of commitment to climate action spurred by the U.S. withdrawal seemed to give campaigners and civil society a measure of hope, as they reacted to the news by emphasizing that the only way to combat the Trump administration’s pro-fossil fuel agenda is mobilize from the ground up, forcing other governments to take the lead.

“Trump has made his decision and we’re making ours—the rest of the world and the majority of Americans who support the Paris Climate Agreement will stand by it,” said 350.org executive director May Boeve. “We’re already seeing dozens of cities commit to 100 percent renewable energy, a trend that will only continue. And throughout the world, leaders are committing to filling the gap that the U.S has created.

“We must use Trump’s bad example to demand that our cities, states and other institutions step up on climate action in meaningful ways,” Boeve added. “By working at the local and regional level, communities can organize for powerful and lasting change, forcing elected officials to choose a side: that of Trump and his fossil fuel billionaire cabinet, or that of the people fighting for a stable climate and an economy that works for everyone.”

“We move on and we move forward, together,” said Matisse Walkden Brown, head of Pacific Net with Greenpeace Australia.

“The United States administration has shown their allegiance to the glory days of the past,” Walkden Brown added. “Sadly for them, the economics, the science, and the people, all agree that the fossil fuel days are over, and that the transformation towards zero carbon is now irreversibly under way and accelerating.

“While this is a shameful day for President Trump and his people, it will not deter the rest of us. It is time for international politics to begin embracing new economies, new technologies, and commit to the fighting for the interests of the people, not the polluters. One man, one country will not change that.”