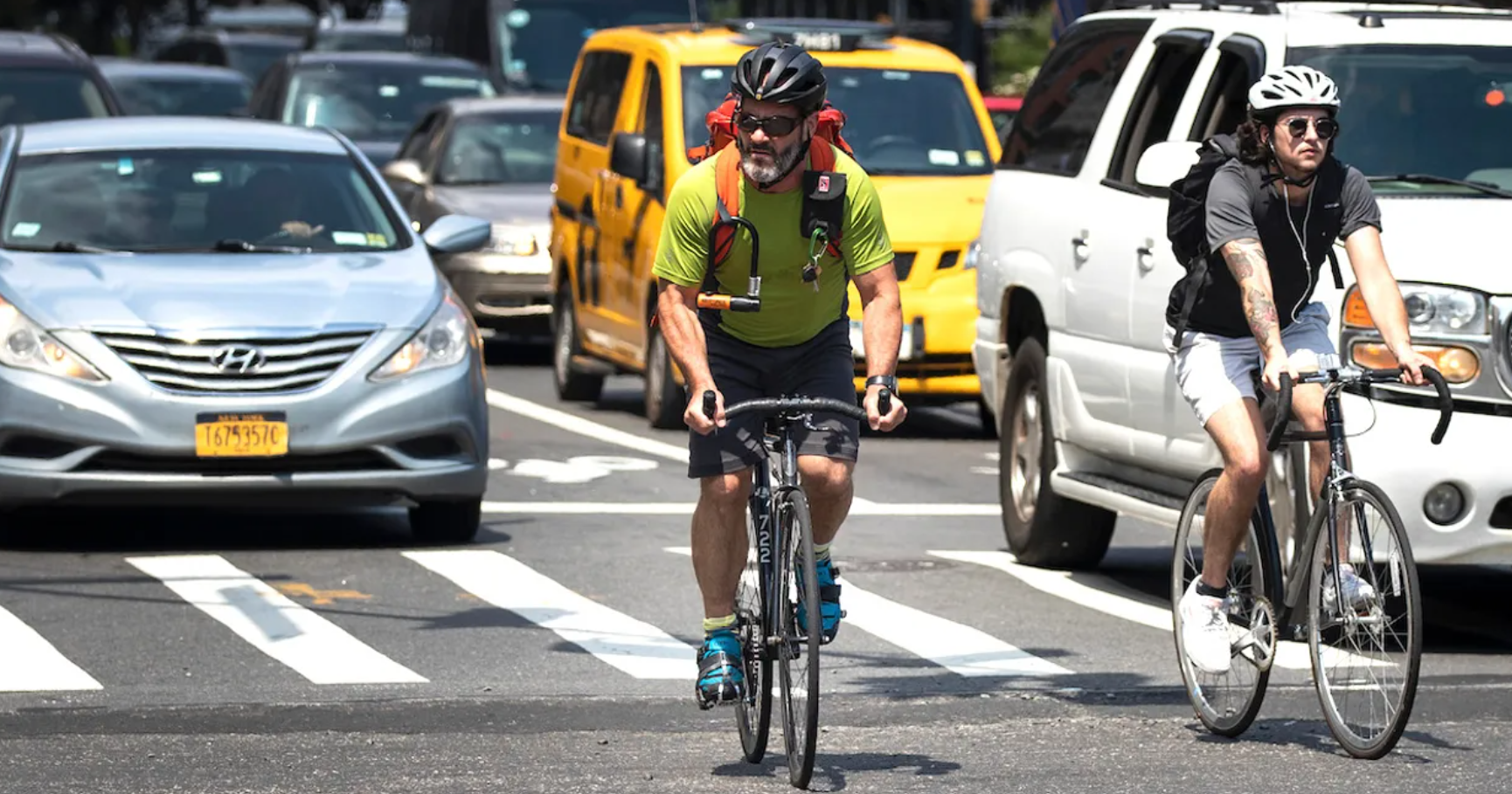 Above photo: Cyclists ride through an intersection in downtown Brooklyn on July 30, 2019 in New York City. Drew Angerer / Getty Images.

Also End to Fossil Fuel Subsidies as Part of ‘Green and Just Recovery.’

Mayors from some of the world’s major cities have unveiled their vision for how the world can recover from the coronavirus pandemic while encouraging environmental justice and fighting the climate crisis.

The C40 Mayors’ Agenda for a Green and Just Recovery, announced Wednesday, includes measures already being adopted in many cities to recover from the pandemic in a way that addresses inequalities and keeps global heating to the Paris agreement goal of 1.5 degrees Celsius above pre-industrial levels. As part of their vision, the mayors are calling on national governments to end all subsidies for the fossil fuel industry.

“Nations must seize this moment to decisively move away from investments in high carbon and fossil fuel intensive industries and increase investments in a low carbon future,” the mayors wrote, according to a press release emailed to EcoWatch.

C40 Cities are a group of 96 world cities representing more than 700 million of the world’s people and a quarter of the world’s economy. In April, they formed the Global Mayors COVID-19 Recovery Task Force to craft a way to respond to the pandemic without abandoning their climate goals, Grist reported, and Wednesday’s proposal is the result.

“Right at the outset of the pandemic, C40 Mayors felt the need to collaborate even more closely, to be able to rapidly learn from each other and take the most appropriate decisions to tackle the COVID-19 challenge,” task force chair and mayor of Milan, Italy Giuseppe Sala said in the press release. “A visionary Mayoral Task Force was created to elaborate on a pathway towards a new, better normal, to the benefit of all cities of the world.”

The mayors’ agenda is divided roughly into two parts: what cities can do on their own, and what they are calling on national and international institutions to help them achieve. On the city level, the mayors called for green jobs, support for essential workers, investments in public services and the creation of greener, more livable cities.

Part of this vision means a shift away from cars and towards public transportation, walking and cycling, Grist pointed out. The plan includes calls to “give streets back to people” by devoting more roadspace to pedestrian or bike paths. It also promotes the idea of a 15-minute city, in which residents can find everything they need within a short walk or bike-ride of their home.

These changes are already being implemented in some cities, Thomson Reuters Foundation reported. Seattle, for example, has permanently banned cars from 20 miles of city streets. Montreal has created 185 miles of new bike and walking paths in two months. Freetown, the capital of Sierra Leone, is working on building a network of electric cable cars.

Cities are also investing in green jobs and green energy. Los Angeles has supported the installation of solar panels on the homes of almost 2,000 low-income families and hired 200 recently incarcerated people to do it. Cape Town, South Africa is training and paying people from low-income communities to retrofit houses.

“Once again, it is city mayors who are showing us the way forward in confronting the COVID-19 public health crisis, reducing inequality and addressing the climate crisis. City mayors understand that we must take action that protects people’s lives and livelihoods now and in the future by recovering better and building a more resilient and sustainable economy,” UN Secretary-General António Guterres said in support. “Cities are agents and engines of change and they can deliver solutions that will reduce carbon emissions to get to carbon neutrality by 2050 while creating better and more sustainable jobs.”

But the mayors also acknowledged that they could not achieve this vision alone. They called on national and international governments and institutions to support them by adapting six commitments. In addition to ending fossil fuel subsidies, the other commitments are:

The plan also has the support of youth climate activists like University of California, Los Angeles undergraduate Briana Carbajal.

“COVID-19 made us face ourselves at our worst. We began questioning everything we know about how we exist on this planet. Out of this tragedy, I am hopeful that it has provided us with a grim enough reflection on the ways we have failed each other, and our home, so that we may move forward to remedy ourselves of racial injustice, environmental degradation, and willful ignorance,” she said in the press release. “The Green and Just Recovery is a necessity on the path to healing. A path I am grateful my generation is leading.”