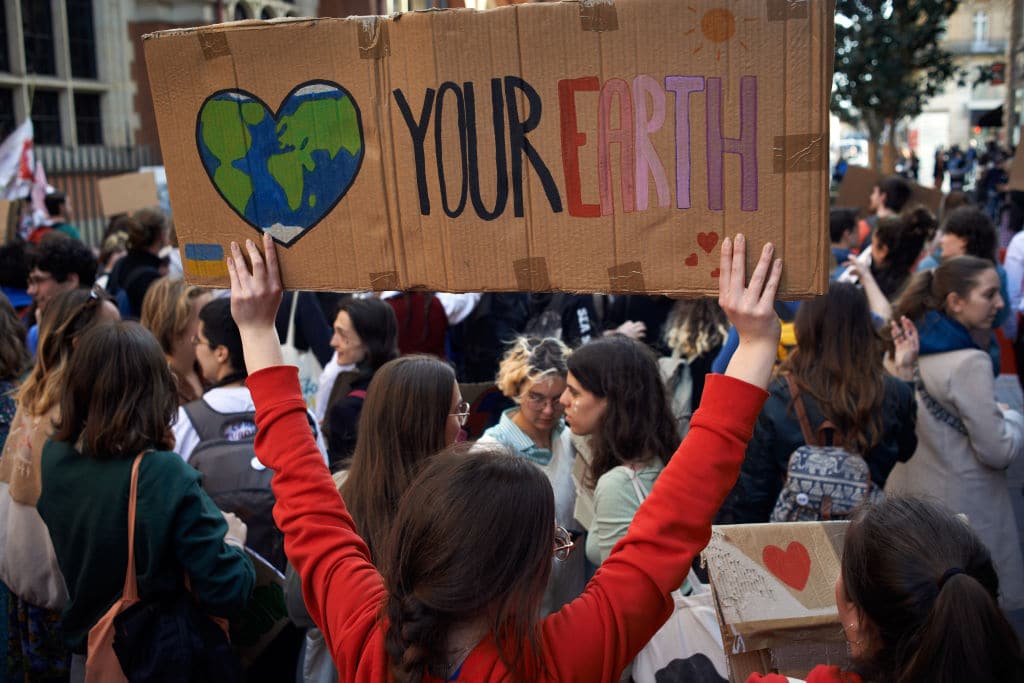 Above Photo: The latest IPCC report finds we are not on track to limit global warming to 1.5 degrees Celsius. Alain Pitton / NurPhoto / Getty Images.

Policies in place to reduce emissions as of December 2020 would lead the planet to 3.2 degrees Celsius of warming, more than double the 1.5 degrees limit that scientists say is essential for avoiding the worst impacts of the climate crisis.

“The jury has reached the verdict, and it is damning,” UN Secretary-General António Guterres told reporters ahead of the report’s release. “This report of the Intergovernmental Panel on Climate Change is a litany of broken climate promises. It is a file of shame, cataloging the empty pledges that put us firmly on track towards an unlivable world. We are on a fast track to climate disaster. Major cities underwater, unprecedented heat waves, terrifying storms, widespread water shortages, the extinction of a million species of plants and animals, and this is not fiction or exaggeration. It is what science tells us will result from our current energy policies.”

“It is a file of shame, cataloging the empty pledges that put us firmly on track towards an unlivable world.”

The new report, “Climate Change 2022: Mitigation of Climate Change,” is the contribution of Working Group III to the IPCC’s Sixth Assessment Report. It had 278 authors from 65 different countries and cited more than 18,000 studies to complete the “scientific trilogy” of the reports that make up the UN panel’s current assessment cycle, IPCC Chair Hoesung Lee told reporters. The first report, released last summer, focused on the state of global warming, while the second, released last month, focused on risk and adaptation.

“The first two IPCC reports told us that climate change is here and now, and causing huge disruptions in the natural world and to human well being. This report tells us that we’re still not doing enough to cut greenhouse gas emissions,” UN Environment Programme Executive Director Inger Andersen said at the press briefing.

The report is clear that humanity must immediately reverse course if it wants to seriously mitigate climate change.

“The reality is that greenhouse gas emissions, which are causing global warming, are at their highest levels in human history,” Working Group III Co-Chair Jim Skea told reporters.

Emissions in 2019 were about 12 percent higher than they were in 2010 and 54 percent higher than they were in 1990. This doesn’t mean that no action has been taken. The annual rate of growth of emissions has slowed in the last decade from 2.1 percent per year to 1.3 percent. In the energy and industry sectors, the rate of growth has decreased by more than half. But this is not enough.

“Unless there are immediate and emissions reductions across all sectors, limiting warming to 1.5 degrees Celsius will be beyond reach,” Skea said.

Sticking to the 1.5 target would mean reaching peak emissions in 2025 and reducing carbon dioxide emissions by 43 percent by 2030 and methane emissions by 34 percent. To limit warming to two degrees Celsius, emissions would still need to peak by 2025 and then fall by 27 percent by the end of the decade. On a slightly longer-term timescale, keeping 1.5 alive means reaching net-zero by the early 2050s, while we have until the early 2070s to limit warming to two degrees. While Skea said it was “almost inevitable” that global temperatures would overshoot 1.5 degrees this century, they could still decrease and hit 1.5 again by 2100 if immediate action is taken.

What We Need To Do

Luckily, the report authors said that the emissions cuts they outlined were indeed possible.

“The IPCC report before us today is powerful evidence that we have great potential to mitigate climate change,” Lee told reporters. “We are at a crossroads. This is the time for action. We have the tools and know-how to limit warming and secure a liveable future.”

Every relevant sector could make changes that would see its emissions at least halve by 2030, the report authors found.

The energy sector, which accounts for a third of emissions, could transition away from fossil fuels and towards low-or no-carbon energy systems, move towards electrification, improve energy efficiency and use alternative fuels like low-carbon hydrogen or biofuels.

Transport could reduce its emissions if demand is reduced and electric technology is boosted, provided it is powered by renewable energy. Battery technology could help power trucks and electric rails, while shipping and aviation need to pioneer alternative fuels.

Urban areas account for more than two-thirds of global emissions, but they could reduce this by improving urban planning, making consumption and production more sustainable, going electric and drawing down carbon through planting trees, installing lakes and designing green roofs.

Buildings have the potential to reach net-zero emissions by 2050 by a combination of retrofitting existing buildings and constructing new buildings with mitigation in mind.

Industry accounts for around a quarter of global emissions, but it could reduce this by improving efficiency, reusing or recycling more products and reducing waste. There are processes to produce important materials like steel and chemicals with few or zero carbon emissions that are nearly ready for commercial use.

Removing carbon dioxide already in the atmosphere will be necessary to counteract emissions from sectors like aviation or agriculture that are difficult to eliminate. It could take the form of promoting or protecting natural carbon sinks through actions like reforestation or developing new technologies, though the latter requires more research and investment.

Restoring and protecting natural carbon sinks like forests, peatlands, coastal wetlands and grasslands could remove and store carbon dioxide at scale, but this is not a get-out-of-jail-free card for other sectors to delay cutting their own emissions. Shifting to more sustainable methods of growing crops and managing livestock could also play an important role.

The report also weighed in on the question of whether or not individual lifestyle changes are part of the climate solution. It found that reducing emissions from demands and services could see a global emissions cut 40 to 70 percent by 2050. As an individual, the most important change you can make is switching from a gas-powered car to walking, cycling or electric transport. Other actions like reducing air travel, renovating your home to make it more energy efficient or eating a plant-based diet can also make a difference. However, the report authors noted that wealthier people could make the biggest difference in this regard, while some people still require more energy, housing and resources to have their basic needs met. The report also acknowledged that it is difficult to act in a vacuum.

“To be effective, lifestyle changes will need to be supported by systemic changes across every aspect of society, including transport, buildings, industry and land use,” IPCC Vice-Chair Diana Ürge-Vorsatz told reporters.

‘Game Over For Fossil Fuels’

The report’s release comes at a crucial moment for the world energy system, as oil-and-gas prices have surged following Russia’s invasion of Ukraine and countries have announced plans to wean themselves off of Russian fossil fuels. Andersen said that the world had “failed” on the “green scorecard” when it came to crafting sustainable recovery packages from the COVID-19 pandemic.

“Once again we now today find ourselves with an opportunity for some, as countries seek out alternative sources of energy,” she said. “Immediate needs must be met, yes, to heat homes and to keep lights on, but as we rethink hydrocarbon suppliers and our dependency on fossil fuels, the solution has to be to kickstart the transition to renewable and cleaner sources of energy.”

Guterres made a similar statement regarding the Ukraine crisis.

“Increasing fossil fuel production will only make matters worse,” he said, calling on civil society to demand renewable energy at scale, an end to coal-fired power and an end to fossil-fuel subsidies.

Responding to the new report, climate advocates also called for a decisive end to fossil-fuel use.

“It’s game over for fossil fuels that are fueling both wars and climate chaos,” Greenpeace Nordic Senior Policy Advisor Kaisa Kosonen said in a statement emailed to EcoWatch. “There’s no room for any new fossil fuel developments and the coal and gas plants we already have need to close early. While our leaders have been claiming they’re doing their very best on climate, the scientists have just proven they are not. There’s plenty of potential to do more right now, with huge benefits! Yet, money keeps flowing to problems instead of solutions, and it will only change with credible targets, policies and support aligned with the Paris Agreement warming limit. Both the threats and the opportunities are larger than ever. But so is the power of people who unite for change.”