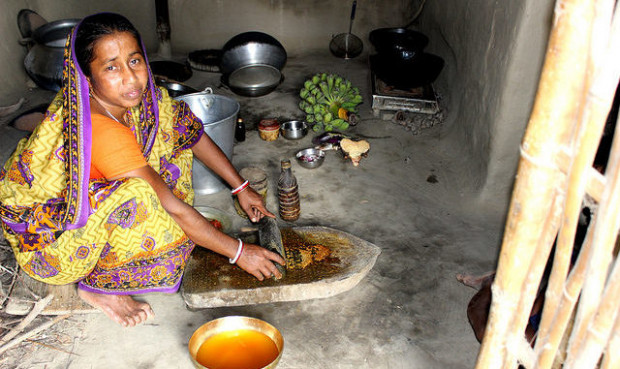 Above Photo: On 1/5th hectare of land in Indian Sundarbans, Alpana Mandal has access to a range of food – fish from their tiny freshwater pond, eggs from a brood of hens and beans, leafy vegetable and rice – all self-grown. But the rising sea threatens this Ganges deltaic village and fleeing to Kolkata city could be their only means of survival. Photo credit: Manipadma Jena/IPS

(IPS) – Rapid urbanization is increasingly shifting the impacts of malnutrition from rural to urban areas. One in three stunted under-five children out of 155 million across the world now lives in cities and towns.

Degrading land productivity, deepening impacts of changes in climate, conflict, and food insecurity, poverty and lack of livelihood opportunities are driving mostly the rural poor into towns and cities, with projections that just 13 years from now, 5 billion people will be living in the world’s urban areas. While the urban population is forecast to double within these 30 years (starting in 2000), the area taken over will triple, increasing by 1.2 million square kilometers, says the Global Land Report 2017.

Close to 90 percent of urban population and area growth is forecast in Asia and Africa, with the most dramatic changes foreseen in Asia, according to this report from the UN Convention to Combat Desertification (UNCCD).

By 2050, 56 percent of Asia’s population will be urban. China crossed the halfway mark in 2012, India will in 2050. This major shifting of the character of a population, the character of its economic activity, from being predominantly rural to becoming urban is seen to catapult – particularly China and India – to global economic leadership. But its urban growth engines could be riding on a huge malnourished rural migrant population.

From 777 million chronically undernourished people worldwide, 2016 saw a jump to 815 million. The State of Food Security and Nutrition in the World 2017, the Food and Agriculture Organization of the United Nations’ latest major report, said the increased food insecurity owes to a greater  number of conflicts, often exacerbated by climate-related shocks. These two factors, which studies have now established to be inter-related, are what is driving most migration today, and possibly will continue to do so in the future unless strong multi-sector action is taken soon.

From rural food producers to net consumers in cities

Rural marginal landholders, the family farmers, compelled to abandon their food producing role, migrate to urban centres to join instead the growing millions of consumers. Where once they grew their own food, kept aside for their own needs first and the remainder sold to urban food chains, and reached out to the natural ecosystem in hard times, these farmers are migrating into an economic structure where access to cash alone determines their food security.

Poor urban households in many developing countries spend over half their earnings on food, studies find.

Although in cities, food is available year-round, a growing number of urban poor face a daily struggle to feed their families. Price fluctuations, sometimes of staples which are increasingly being imported from other parts of the world, hit the poor hardest.

An illness, a religious ceremony or a family wedding can cut deeply into the fragile food budget of the urban poor, paving the way for malnutrition and stunted childhoods.

When Sunita Behera came to India’s megacity Delhi with her three children, the youngest barely three years old, and her husband, a wage worker for a construction contractor building the 2010 Commonwealth Games stadium, they could afford meat and fish only once a week. But vegetables and lentils – said to be a poor man’s meat because of its rich protein content – were a regular part of their meals.

The price of lentils, India’s staple item, inched up because more was being imported to meet the demand. By 2014, the commonly used variety was 1.5 dollars a kilogram. Reducing the cooked quantity by half, Behera would mix rice starch to thicken it and sauté a few more chilies to spice it up.

In 2015, her husband fell from a construction scaffolding and could not work for months. Lentil prices had doubled and a month’s salary from her domestic work from one household would have gone for purchasing a month’s requirement of lentils alone. She didn’t buy them anymore and they mostly ate rice and potatoes. Her father back in the village grows green grams over half an acre every winter.

Many city-dwellers in Asia, and in India specifically, particularly men when they migrate alone, have limited time and no place to cook or store groceries, relying increasingly on street foods. Poor shelter, lack of sanitation and hygiene in slums, and insufficient family and community support – which were woven into the rural social fabric – further compound the problems of the urban poor. Under-nutrition and micronutrient deficiencies are the result.

With over 65 percent of its population below the age of 35, India is set to supply more than half of the potential workforce over the coming decade in Asia, a recent study said. Over the last two decades, India’s urban population increased from 217 million to 377 million and is expected to reach 600 million, or 40 percent of the 1.5 billion population, by 2031. This demographically-powered economic growth is bound to see a huge rural-urban migration. Hundreds of ‘smart’ cities are already underway to capitalize on this migrating workforce.

Not only will urban land area triple globally between 2000 to 2030, the projected expansion will take place on some of the world’s most productive croplands, according to a 2016 study. Asia and Africa alone will account for over 80 percent of global cropland loss. Asia’s 3 percent is world’s highest absolute loss, leading to a 6 percent annual food production loss. Currently around 60 percent of cropland around towns and smaller cities have irrigation facilities and are twice as productive.

This dynamic adds pressure to potentially strained future food systems, says the study published in the Proceedings of the National Academy of Sciences (PNAS).

China and India will continue to urbanize rapidly, but with different spatial patterns and development dynamics, it said. China’s cropland losses between 2000 and 2030 are calculated to be 5-6 percent, adding up to 9 million hectares and translating into as high as one-tenth of food production loss.

India’s absolute urban area expansion until 2030 would take over around 4 million hectares, half that of China. The South Asian nation will lose 2 percent production by 2030, mainly because the nature of its urbanization will be more in the shape of small towns and 100,000-population cities, according to the PNAP study. Its peri-urban regions would for the time being continue to grow food and rural-urban linkages have the potential for sustainability.

Indian experts however said India’s infrastructure developments and land use change in favour of industries and mining is already severely affecting the food and nutritional security of the country’s poorest, including many of the 104 million partly forest-dependent indigenous population.

Owing to hundreds of land related conflicts that over the last two decades delayed proposed industries, mining projects, dams and other infrastructure, the government has set aside close to 2.68 million hectares of land-bank, barricading some of them in eight states, according to a recent news report.

An industrial corridor is being planned between the financial hub of Mumbai and the capital New Delhi, which will develop as many as eight new manufacturing cities across six states. India constructed 20,000 km of new and upgraded roads between 2012 and 2017 to improve transport systems. An acute shortage of 18 million urban housing units across India in 2012 has led the government to convert the city fringes for expansion, to cite only a few urban infrastructural projects.

Even when the aggregate amount of cropland on city fringes is high, the weak link is that each patch is relatively small, with vulnerable smallholders finding it difficult to hold out against the government or aggressive property developers.

Cropland loss can be compensated by the global food trade but its impacts are borne mainly by the urban poor. Agricultural intensification and expanding into grazing commons and less productive land can compensate for food production loss. In South Asia, however, much of the suitable land is already under intensification. With climate change already adversely affecting yields, further intensification will be counter-productive.

Policies to ensure sustainable urbanization and adequate quantity and quality of food supply include protecting peri-urban agricultural land from conversion, incentivizing farmers in proximity to cities to maximize production, and encouraging urban residents to grow food even on small patches and rooftops.

However, to date, the quality of governance in countries with important cropland losses tends to be medium to low in emerging economies like India and China, the PNAP study said.