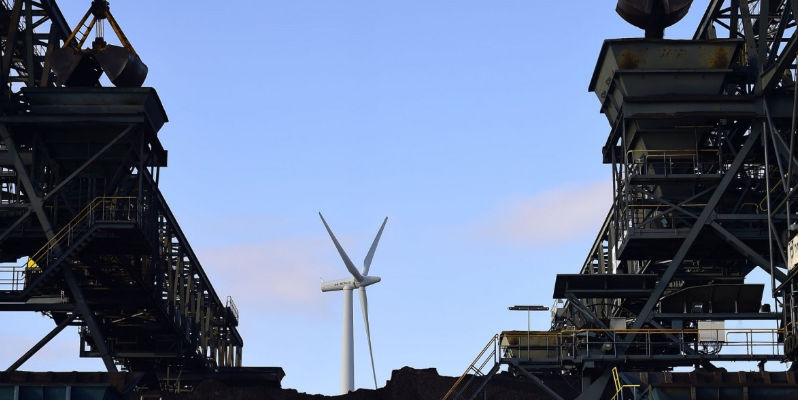 Above: Windmill and coal. Global investors managing $32tn are urging governments to phase out all coal burning. Photograph: Alexander Koerner for Getty Images.

Global investors managing $32 trillion issued a stark warning to governments at the UN climate summit on Monday, demanding urgent cuts in carbon emissions and the phasing out of all coal burning. Without these, the world faces a financial crash several times worse than the 2008 crisis, they said.

The investors include some of the world’s biggest pension funds, insurers and asset managers and marks the largest such intervention to date. They say fossil fuel subsidies must end and substantial taxes on carbon be introduced.

Ministers arrive at the UN climate summit in Katowice, Poland, on Monday for its crucial second week, when the negotiations on turning the vision of the Paris agreement into reality reach a critical point, with finance for fighting global warming a key area of dispute.

“The long-term nature of the challenge has, in our view, met a zombie-like response by many,” said Chris Newton, of IFM Investors which manages $80 billion and is one of the 415 groups that has signed the Global Investor Statement. “This is a recipe for disaster as the impacts of climate change can be sudden, severe and catastrophic.”

Investment firm Schroders said there could be $23 trillion of global economic losses a year in the long term without rapid action. This permanent economic damage would be almost four times the scale of the impact of the 2008 global financial crisis. Standard and Poor’s rating agency also warned leaders: “Climate change has already started to alter the functioning of our world.”

Thomas DiNapoli, of the $207 billion New York State Common Retirement Fund, another signatory, said taking action on global warming not only avoided damage but could boost jobs and growth. “The low-carbon economy presents numerous opportunities and investors who ignore the changing world do so at their own peril.”

Lord Nicholas Stern, of the London School of Economics said: “The low-carbon economy is the growth story of the 21st century and it is inclusive growth. Without that story, we would not have got the 2015 Paris agreement, but the story has grown stronger and stronger and is really compelling now.”

The US Trump administration will hold its only event at the UN summit on Monday and is expected to promote “clean coal.” But Stern said Trump’s suggestion that action on climate change was a jobs killer was “dead wrong.” Stern said: “You don’t create jobs for the 21st century by trying to whistle up jobs from the 19th century.”

A key demand of the Global Investor Statement is to phase out coal-fired power stations across the world. Peter Damgaard Jensen, the CEO of Danish pension fund PKA, said: “Investors, including PKA, are moving out of coal in their droves given its devastating effects on the climate and public health, compounded by its poor financial performance.”

Dozens of nations will affirm their commitment to end their coal burning on Thursday. However, the UN summit has seen US, Chinese and Japanese financial institutions cited as leaders in providing nearly $500 billion in backing for new coal plants since the Paris agreement was signed.

Another investor demand on governments is to introduce “economically meaningful” taxes on carbon. Most are below $10 per ton, but needed to rise to up to $100 in the next decade or two, the investors said. The French president Emmanuel Macron’s botched attempt to increase fuel taxes and the gilets jaunes protests that followed were a model of how not to do it, said observers in Poland.

“It failed to take people along with them, accompanying the policy with social measures to allow citizens to embrace the opportunities of the transition and ride out the challenges,” said Camilla Born, of advisers E3G. The host government of the climate summit, Poland, is heavily reliant on coal and is stressing the need for a “just transition” for workers in the fossil fuel industry.

The investors include some of the globe’s largest pension funds, such as Calsters and ABP, and insurers, including Aviva, AXA and Zurich. They also want an end to subsidies for coal, oil and gas, which the IMF rates at $5 trillion a year and which the G20 has been promising to tackle for a decade. This measure alone could cut global CO2 emissions by 10% by 2030, according a UN report released in time for the Poland summit.

The investors said current national pledges to cut carbon would lead to a catastrophic 3°C of global warming and that plans must be dramatically increased by 2020. For developing countries, ”finance is the critical enabler of increasing ambition,” said Niranjali Amerasinghe, of the World Resources Institute.

UN climate summits are frequently dogged by disputes over the $100 billion a year that rich nations have promised to poorer ones by 2020 to tackle climate change. Direct government funding and private company finance were needed, Amerasinghe said: “It is really great when private sector is out there saying we are going to invest in climate-friendly activities.”

Originally published by The Guardian