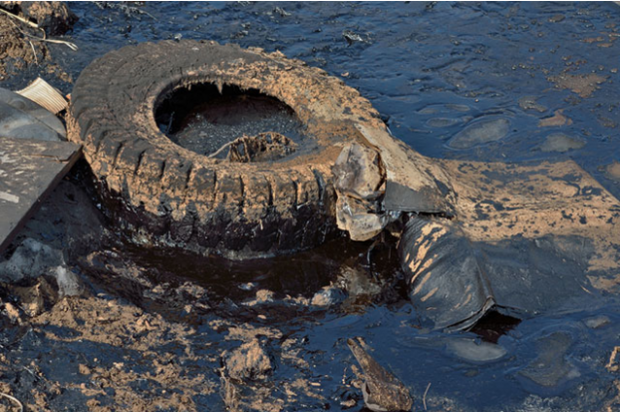 Above Photo: Oil Pollution via Shutterstock.

When it comes to financial risks surrounding water, there is one industry that, according to a new report, is both among the most exposed to these risks and the least transparent to investors about them: the oil and gas industry.

This year, 1,073 of the world’s largest publicly listed companies faced requests from institutional investors concerned about the companies’ vulnerability to water-related risks that they disclose their plans for adapting and responding to issues like drought or water shortages.

Many of those companies responded by reporting their information to a group called CDP, which works with over 800 institutional investors with assets of US$95 trillion to push for corporate transparency. But in the oil and gas industry, the compliance rate was just over half the average, with only 22% of companies providing information, CDP reported.

That’s a concern for investors, CDP wrote, because their data showed that roughly two thirds of oil and gas companies say they are vulnerable to water risks – and those risks are not just speculative risks to keep an eye on for some future time.

Nearly half of the oil and gas companies who responded report that their bottom line has already suffered due to “water-related challenges” over the past year, placing the industry in the ranks of the most vulnerable, the CDP reported.

“Just as oil was to the 20th century, water is fast becoming the defining resource of the 21st century,” said Cate Lamb, head of water at CDP. “Unfortunately however, unlike oil, there is no replacement for water.”

The growing risks of unaddressed climate change are beginning to draw the attention of the financial community, with investors, central bankers and global economic institutions increasingly questioning what impacts shifting weather patterns might have on business as we know it.

But questions remain about the capacity of companies often focused on quarterly earnings to respond to longer-term challenges like climate change without a catastrophic economic shock, including the bursting of what some have labeled “the carbon bubble.”

And the oil and gas industry, including many companies long considered reliable generators of profits, could see its financial prospects shift sharply if climate controls limiting carbon and methane were put into place – or face growing expenses from water shortages and weather impacts if climate change continues unabated, economists warn.

These concerns are raised not just by academics and observers, but by some of the world’s most powerful economic figures.

“The challenges currently posed by climate change pale in significance compared with what might come,” Mark Joseph Carney, Governor of the Bank of England and Chairman of the G20’s Financial Stability Board, which was set up in 2009 by the G20 to keep tabs on risks to the financial system, told Lloyd’s of London officials at a speech last month.

“The far-sighted amongst you are anticipating broader global impacts on property, migration and political stability, as well as food and water security. So why isn’t more being done to address it?” Carney asked.

The risks that climate change poses to the global economy fall into three categories, Mr. Carney told the gathered representatives of the insurance industry.

There are the direct risks to physical assets – the damage from flooding and storms which are projected to be more common and severe as the climate warms. Second, there is a risk of liability if people affected by climate change successfully sought compensation from those who caused it. And third, what Mr. Carney called “transition risks” – the changes in the value of assets resulting from a shift to a low-carbon economy, including the risk that fossil fuel reserves will become worthless because burning them would release too much carbon or methane pollution into the atmosphere.

He cited UN estimates that between two thirds and 80 percent of oil, gas and coal reserves currently on company books as proven reserves must be left “stranded” if climate agreements are kept.

“If that estimate is even approximately correct it would render the vast majority of reserves ‘stranded’ – oil, gas and coal that will be literally unburnable without expensive carbon capture technology, which itself alters fossil fuel economics,” he said. “A wholesale reassessment of prospects, especially if it were to occur suddenly, could potentially destabilise markets.”

Mr. Carney is not the only economic expert to warn of the growing hazards that climate change poses. “The US economy faces enormous risks from unmitigated climate change,” former US Treasury Secretary Robert E. Rubin wrote in a Washington Post editorial last year. “But the metrics we currently use to measure economic growth, fiscal prospects and business earnings do not incorporate these risks.”

“For too many years, we failed to rein in the excesses building up in the nation’s financial markets. When the credit bubble burst in 2008, the damage was devastating. Millions suffered. Many still do,” Henry Paulson, another former Treasury Secretary wrote in the New York Times last year. “We’re making the same mistake today with climate change.”

The dire warnings from central bankers are growing at a time when the oil and gas industry is already suffering from a pricing slump and a growing amount of reserves that are expensive to extract, like shale oil that requires fracking, and tar sands.

While policymakers have been urged to encourage the expansion of the shale gas rush with promises of job growth in hard-pressed areas like North Dakota and rural Pennsylvania at the edge of the rust belt, the boom times have proved remarkably short.

More than 200,000 workers in the oil and gas industry have been laid off since oil prices slumped. And the ripple effects from the downturn have been profound.

“Everybody is scared to death, and we’re anticipating the worst,” Mike McCabe, 53, a second-generation steelworker, told the New York Times. “They pay us to make pipe. That’s what we do. But the rumor is that the order book is terrible.”

Investors who have stayed ahead of the curve at times moved early not merely for practical reasons, but also for moral ones. Last year, the Rockefeller Brothers Fund, which controls over $850 million in its portfolio and was built on one of the world’s first big oil fortunes, shocked many when it announced that it would divest from oil over climate change concerns.

That decision proved particularly wise, since oil prices have been slashed roughly in half since the Rockefellers made their move.

“We are able to show it can be done without causing harm to the overall performance of your investment portfolio,” the fund’s President Stephen Heintz told CNN.

While the oil downturn this time around has been driven by falling oil prices rather than water shortages or climate concerns, the current slump could be just a taste of things to come.

As DeSmog recently reported, a newly published peer-reviewed paper took a look at the water supplies required by Canada’s oil sands industry, concluding that the Athabasca River has historically fluctuated so significantly that the industry has bet its future on the “untenable assumption” that water will be available in the region.

Meanwhile, calls from investors, like those organized by CDP, for companies to clarify exactly how exposed they are to these risks are growing.

“Looking at water data is a part of identifying quality. One risk in investing is not knowing what you own,” said Ingrid Dyott, portfolio co-manager at Neuberger Berman, a major financial firm that manages $237 billion in client assets as of September. “In industries where water is relevant, it is absolutely critical therefore that companies disclose to CDP.”